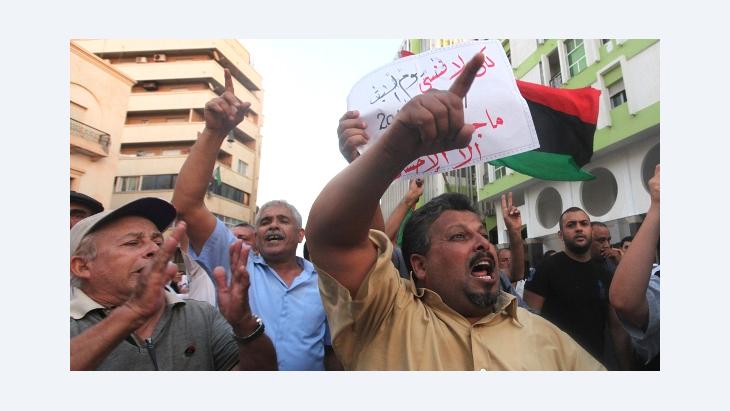 ﻿The nature of Libya's post-revolution armed Islamist forces is by no means straightforward. Salafi jihadism is not an organization, but an ideological trend based on the core belief that armed tactics of all kinds are the most effective. Background information by Omar Ashour

﻿"They are armed, I am not going to fight a losing battle and kill my men over a demolished shrine," said Fawzi Abd al-'Aali, the former Libyan interior minister, before he "resigned" last August. He was referring to the armed Salafi groups that were accused of destroying Sufi shrines. One of the accused groups was the Ansar al-Shariah Brigade, which was quick to support the demolition, but denied any responsibility for it.

Ahmed Jibril, Libya's deputy ambassador to London, has now accused the Brigade, headed by Muhammed Ali Al-Zahawy, of perpetrating the attack on the US Consulate in Benghazi, which killed the American ambassador, Christopher Stevens, and three other US personnel, as well as Libyan guards. Others have quickly embraced and promoted Jibril's allegation. But the picture is more complex.

Self-proclaimed guardians of the Sharia

The Brigade denied responsibility in a written statement, as well as in a brief interview with its spokesperson, who at the time was in charge of guarding Al Jala Hospital in Benghazi. 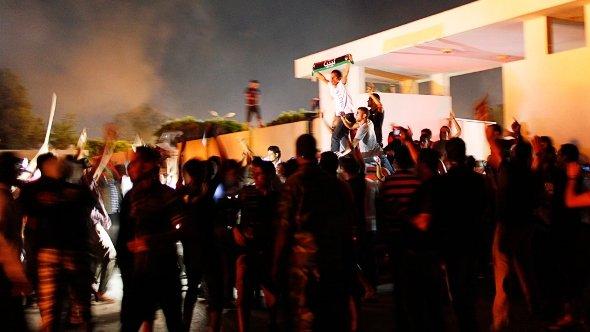 "Down with Al Qaida!" - Demonstrators cheer after storming the headquarters of the Islamist Ansar al-Sharia militia group in Benghazi on 21 September 2012. The Islamist militia was swept from its final major military base in Benghazi in the early hours of Saturday after a mass popular uprising in support of the government

​​Like its statement on the destruction of Sufi shrines, it denied involvement in the attack on the US Consulate, but stressed the gravity of the insult against the Prophet that putatively triggered it.

The Brigade attracted public attention last June as well, when around 300 armed members staged a rally in Benghazi, sparking outrage among Libyans. "We wanted to send a message to the General National Council members," according to Hashim Al-Nawa', one of the Brigade's commanders. "They should not come near the Shariah. It should be above the constitution, and not an article for referendum."

But was the Ansar al-Shariah Brigade really behind the attack on the US Consulate? The nature of Libya's post-revolution armed Islamist forces is by no means straightforward. Salafi jihadism is not an organization, but an ideological trend based on the core belief that armed tactics of all kinds are the most effective – and, in some versions, the most legitimate – method of bringing about social and political change.

Last year, its adherents did play an important role in the removal of Libya's brutal dictator, Colonel Muammar el-Qaddafi. Many subsequently matured politically, revised their worldview, and shifted from armed to unarmed activism, forming political parties and contesting elections.

Electoral deafeat for the Islamists 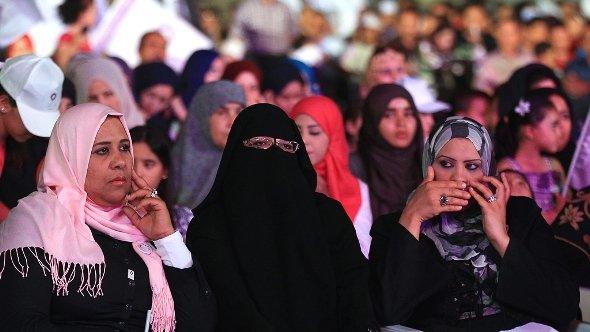 After the toppling of Gaddafi, many Salafi jihadis shifted from armed to unarmed activism, forming political parties and contesting elections. The Al Watan Party is, for instance, led by former LIFG and Tripoli Military Council commander Abd al-Hakim Belhaj. However, in the elections on 7 July 2012, they proved to be quite unsuccessful

​​Both parties fared poorly in the election in July of a new General National Congress, with only Qaid winning a seat. Indeed, the GNC elections were in many ways a defeat for Libya's non-violent Salafi parties (such as Al Asala), as well as for the post-jihadists.

But several armed formations, such as Ansar al-Shariah and the Imprisoned Sheikh Omar Abd al-Rahman Brigades, still reject the transition to party politics and integration into state institutions. These organizations are numerous, but small. Some were not invited – or given sufficient incentive – to join official bodies.

"Nobody asked us to join the army or the police," Sufian bin Qumu, Ansar al-Shariah's commander in Derna and a former Guantánamo detainee, said in an interview last April. "They did not even give me or any of my men a reward for fighting." Bin Qumu has a small paramilitary force training in the Bou Musafir forest on the outskirts of Derna. He insists that if the head of the boy scouts or the city's clan leaders asked him to disband the training camp, he would do so.

The tragic death of Stevens and his colleagues has engendered wide public outrage in Libya, adding to the isolation and de-legitimization of the armed groups. 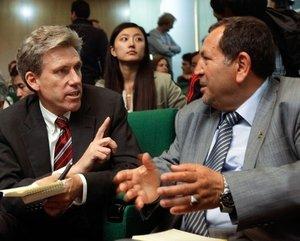 On the back of the killing of US ambassador Christopher Steven, demonstrators gathered in Libya to condemn the killers and voice support for the U.S. Pictured: Stevens (left) and Council member for Misrata, Suleiman Fortia

​​Dozens of Libyan activist groups have uploaded videos paying tribute to Stevens, as well as issuing statements against terrorism and Al Qaeda. One of the Muslim Brothers' Web sites includes such a statement, and Libya's Grand Mufti, Sheikh Sadeq al-Gheriani, also condemned the attack.

Two issues remain critical in Libya to prevent future tragedies. The first is the need to capitalize on public support and continue the disarmament, demobilization, and reintegration process that started under the National Transitional Council but was never completed. Second, the government must enhance its communication strategy.

Arab Spring governments condemned the outrageous movie smearing the Prophet of Islam, but they should have stressed that American official and unofficial bodies had nothing to do with the film's production. Collective punishment and targeting the innocent is forbidden in the Koran in more than 20 verses: "That no burdened person (with sins) shall bear the burden (sins) of another" (The Star Chapter 53:38).

Omar Ashour, Director of Middle East Graduate Studies, Institute of Arab and Islamic Studies, University of Exeter, and Visiting Fellow at the Brookings Doha Center, is the author of The De-Radicalization of Jihadists: Transforming Armed Islamist Movements and Security Sector Reform in Egypt: Dilemmas and Challenges (forthcoming).

Morocco and the European Union are at cross purposes when it comes to the Western Sahara. And, as Germany does not support Moroccan claims to the territory, a major conflict has ... END_OF_DOCUMENT_TOKEN_TO_BE_REPLACED

Turkey's parliamentary and presidential elections are scheduled for June 2023. But they are already casting a shadow. While the opposition is calling for early elections, ... END_OF_DOCUMENT_TOKEN_TO_BE_REPLACED

Recep Tayyip Erdogan, disappointed by the European Union’s reluctance to integrate Turkey into its ranks, has re-directed his country’s diplomacy toward the Maghreb and Africa to ... END_OF_DOCUMENT_TOKEN_TO_BE_REPLACED

Although a unity government was formed in Libya in March 2021, tensions and possible crises between the political actors are already emerging. What problems does the country face ... END_OF_DOCUMENT_TOKEN_TO_BE_REPLACED

German Middle East analyst Guido Steinberg and television journalist Ulrich Tilgner have both published new books on the conflicts in the Middle East. Their analyses and their ... END_OF_DOCUMENT_TOKEN_TO_BE_REPLACED
Author:
Omar Ashour
Date:
Mail:
Send via mail

END_OF_DOCUMENT_TOKEN_TO_BE_REPLACED
Social media
and networks
Subscribe to our
newsletter