Skip to main content
Islamist Parties in the Maghreb

Taming Islamists by Integrating Them into the Political System

The last few years have witnessed Islamic parties participating in the political process in both Algeria and Morocco. This has resulted in these parties becoming more pragmatic and ready to make compromises. By Isabelle Werenfels 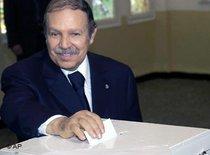 Algerian President Bouteflika casts his ballot for the 2005 referendum. Algerians had voted on a peace plan the government said will help the country move on from a brutal Islamic insurgency. Critics charged the move will whitewash past crimes

​​After the electoral victory of the Islamist Hamas party in Palestine, the Western media has been quick to draw parallels to the 1991 massive electoral success of the Islamist Front Islamique du Salut (FIS) in Algeria. Such comparisons are problematic, not least because the success of Hamas can only be understood in the context of the Israeli occupation. Reference to the Algerian case is nonetheless useful for quite very different reasons.

Algeria can serve as a model case highlighting the fatal developments that can result from the flawed strategy of suppressing an Islamic mass movement. In Algeria, the election victory of the Islamists was followed by the suspension of elections by the army and the banning of the FIS. This resulted in a civil war in which some 150,000 people lost their lives.

Meanwhile, the Algerian leadership has learned the lessons of its past mistakes and, since 1997, has pursued a parallel policy of combating Islamic extremists while selectively including Islamic parties in the political process, as long as they adhere to the rules set down by the regime.

A glance at Tunisia and Morocco, Algeria's neighbors, shows how differently the ruling elites in the three Maghreb states have reacted to the Islamist challenge, which has been growing in strength since the 1980s. In 1997, King Hassan II of Morocco opted for a selective integration of the Islamists, not least in response to the escalating violence in Algeria at the time. The rationale behind this move was to force a split in the Islamist movement and to "domesticate" the legalized forms of Islamism.

To achieve legal status, the Islamist parties had to recognize the dual constitutional role of the monarch as both religious leader and policy maker. Currently, two such parties are registered – the Parti de la Justice et du Développement (PJD), the third largest party in parliament since 2002, and the Al-Badil Al-Hadari (Cultural Alternative), legal since 2005. The strict Islamic Al-Adl Wal-Ihsan movement (Justice and Charity) remains forbidden, primarily because it rejects the monarchy in its existing form. The group's activities, however, are generally tolerated.

In contrast to the examples of Algeria and Morocco, the zero-tolerance strategy towards Islamists in Tunisia has considerably hardened the authoritarian character of the state, Werenfels argues

​​During the course of Algeria's civil war, the country's political decision-makers, consisting exclusively of the military before the election of Bouteflika as president in 1999, managed to come to an arrangement with Islamist parties similar to that found in Morocco. In an attempt to split the Islamist spectrum, politically marginalize the FIS, and boost their own tarnished legitimacy, authorities have permitted three Islamist parties to take part in elections since 1997 – the An-Nahda party, the Mouvement de la Réforme Nationale (MRN), currently the third largest party in parliament, and the Mouvement de la Société pour la Paix (MSP).

This last party even joined the 1997 governing coalition and held 5 of 41 cabinet posts. In 1991, An-Nahda and the MSP had unsuccessfully competed against the FIS. As a rule, those individuals and groups capable of mobilizing the masses are shut out of politics. This applies especially to former key members of the FIS, even those who today have explicitly committed themselves to the democratic process.

Under President Ben Ali, Tunisia has, to a certain extent, chosen the opposite route. Following a short period of partially integrating Islamists in the late 1980s, Ben Ali has adhered to a zero-tolerance strategy since 1990. This was triggered by the strong performance of independent candidates coming from the milieu of the non-recognized Islamist Nahda party in the 1989 parliamentary elections. The subsequent wave of repression has lasted to this day. No Islamist parties are permitted in Tunisia. Islamists are neither allowed to engage in politics nor assemble for charitable activities.

If the different state strategies in dealing with Islamists were only judged in terms of limiting the movement's strength, then the Tunisian policy of repression would have to be ranked as the most successful. Islamists in Tunisia have completely disappeared from public view. Presumably, it is also difficult for them to reorganize underground.

By contrast, Islamists in Morocco continue to gain ground. In 2007, the PJD may emerge as the big winner from parliamentary elections. The Algerian Islamists still remain split and, therefore, politically weaker than they were a few years ago. Even in a free and fair election, none of the existing Islamist parties would win. Yet, if they combined forces, they would fare quite well.

The reverse side of success

A far more complex picture emerges if the various integration and suppression strategies are judged using more sophisticated benchmarks, and if other factors, such as the reform potential of the respective political system and how well the policies have effected the objectives of individual Islamists, are taking into account.

Then the reverse side of the Tunisian success story can be observed. Over the course of its struggle against Islamists throughout the past 15 years, Tunisia has transformed itself from a potential democracy into an authoritarian Arab state. Tunisians have experienced a general decline in political freedom and civil rights that has gone hand in hand with the suppression of the Islamists. Even secular opposition groups hardly have the opportunity to organize, are regularly arrested, and are the victims of smear campaigns in the state media.

The conclusion to be drawn from the Tunisian experience is that the exclusion of Islamists prevents democratization, since such policies inescapably encourage authoritarian structures and block political competition. The Algerian experience in the early 1990s clearly shows how such exclusion policies together with an explosive socio-economic situation can lead to violent confrontation.

Conversely, the integration of Islamists in Algeria and Morocco has yielded positive effects in two respects. First of all, the objectives of the Islamist parties have changed. Of course, religious teachings remain the basis of all their pronouncements. Yet, in practice, the legal Islamist parties increasingly behave like other parties. In everyday political life, their actions are determined by the criteria of power politics and they are increasingly prepared to step back from socio-political policies based on religious values when it comes to matters of national interest or even their own status.

The Moroccan and Algerian parliaments have become more representative through the participation of the Islamists. The Islamist parties have a greater self-interest in the democratic process than other parties, because they stand to gain the most from free and fair elections.

In Algeria, the MRN has participated in electoral law reform, with the aim of achieving greater transparency. Certain Islamists may still be secretly promoting the "one man, one vote, one time" option. Yet there is a growing awareness among Islamist parliamentarians that they must come to agreement with significant dissenting groups rather than try and subjugate them. This is becoming increasingly apparent in talks with Islamist parliamentarians.

Paradoxically, the political reform agenda of the Islamists greatly coincides with that of external actors, such as the EU, the USA, and Bretton Woods Institutions, who insist on good government leadership, the rule of law, the fight against corruption, transparency, and accountability. In the area of social policy, however, Islamists tend to put on the brakes.

In Morocco, the PJD only agreed to the new, progressive family law in 2003, because after the terrorist attacks in Casablanca, any other decision would have been sheer political suicide. It must be said, though, that the moral conceptions of PJD are far closer to those of the morally conservative Moroccan society than those of the country's Western-oriented elite.

To what extent, if at all, Islamists are a key to reform is not relevant to the issue of whether they should be integrated into the political process. The fact is that they represent a considerable portion of the population. In the long term, the political costs of their exclusion – a blocking of reform and the resulting potential for conflict, especially in times of economic crises – could be extremely high.

This article is an abridged version of a text that was previously published in the Swiss daily Neue Zürcher Zeitung.

Isabelle Werenfels is a researcher at the German Institute for International and Security Affairs (SWP) in Berlin.

Al-Wasat Party
Democratic and Pluralistic?
Egypt could soon have a new political party. When the country's committee for the recognition of new parties meets at the end of October, it's possible that it might approve the Islamic reformist Hisb Al-Wasat (Centre Party). Jürgen Stryjak looks at Al-Wasat, which is often compared to Turkey's moderate Islamist ruling party AKP.

Parliamentary Elections in Egypt
Islamists Integrated into Government?
In Egypt, polls opened on 9 November for the first round of the three-stage parliamentary elections. The role of the Muslim Brotherhood could prove to be decisive. Veit Medick reports

Dossier
Democracy and Civil Society
People in the West often wonder if Islam is compatible with democracy. However, many intellectuals in countries where Islam plays a major role do not see religion as a hindrance to the democratization of their societies. The main obstacle in their view is instead the fear on the part of the present rulers of forfeiting their power.