Fears of War on the Horn of Africa

After 15 years of anarchy in Somalia, Islamists have taken control of large parts of the country. But the growing influence of the Union of Islamic Courts and the rise to power of extremists threaten to embroil the entire region in war. By Marc Engelhardt

After 15 years of anarchy in Somalia, Islamists have taken control of large parts of this country on the Horn of Africa. But the growing influence of the Union of Islamic Courts and the rise to power of extremists threaten to embroil the entire region in war. By Marc Engelhardt 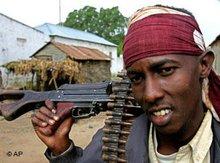 Since taking over Mogadishu a few months ago, extremist forces within the loosely-associated "union" have continued to gain influence, writes Marc Engelhardt

​​Mogadishu had not seen anything like this in 15 years. For the first time since the overthrow of the dictator Mohamed Siad Barre, the Somali capital has been in the hands of a single group, the Union of Islamic Courts. Their leader, Sharif Sheikh Ahmed, celebrated their rise to power on June 5 as "the beginning of a new era." How did Somalis react? "I'm just happy that we can safely set foot in front of the door again," said Fatima, a market vendor. A taxi driver named Mohamed had nothing but praise for the newly reunited city, which had earlier been split up and ruled by rival clan militias: "There are no more roadblocks where you have to pay protection money – it's quite a change."

But four months after the rise to power of these united Islamic courts, which hand down rulings according to Sharia law, the mood has radically changed. Many people are not so delighted with the new champions of law and order who have taken control of this largely lawless society. For centuries, Somalis have practiced a tolerant version of Islam, and now they see the Islamists as new oppressors. "We want our cinemas back!" chanted protesters in early October in the port city of Kismayo. The crowd had taken to the streets to demonstrate against a ban on popular Hollywood films. Particularly radical leaders even prohibited the broadcasting of soccer matches during the World Cup. Radio stations with Western music have been banned along with khat, a popular stimulant in Somalia. In Mogadishu convicted murderers are again being publicly executed. "I've never seen such widespread fear in Mogadishu before," says a German development worker who has been a regular visitor to Somalia over the past ten years.

The rise of the extremists Since taking over Mogadishu a few months ago, extremist forces within the loosely-associated "union" have continued to gain influence. In addition to Sharif Sheikh Ahmed, who has a reputation as a liberal pragmatist, another leader has advanced to the head of the organization: Hassan Dahir Aweys, an internationally wanted terrorist who is believed to be a member of the Jihad movement. Every day tension mounts between the Islamists and the transitional Somali government, which was placed in power following international negotiations two years ago.

The government cabinet may be recognized by the UN, but it only controls the city of Baidoa, over 200 kilometers from Mogadishu. Both sides say that they still want to attend peace talks organized by the Arab League for late October in Khartoum, but virtually no one believes that an agreement can be reached. In Kismayo, the Islamists have broken their promise to refrain from conquering new territory. In reaction, the transitional government has brought Ethiopian troops to Baidoa, a move that it had previously ruled out. Somali radio stations are reporting that "war is imminent" between the two camps.

Archenemy Ethiopia In late September in Baidoa, the country experienced its first suicide bombing, an assassination attempt on President Abdullahi Yusuf, who barely escaped unharmed. His government had just joined Ethiopia in calling for East African troops to protect Somalia. Ever since the Ogaden War in the seventies, most Somalis see Ethiopia as the archenemy. "I have no doubt that our troops will fight against the Ethiopians," said a high-ranking official in the Union of Islamic Courts, Moalim Hashi Mohamed Farah. "If the Ethiopians do not retreat, we will march all the way to Addis Ababa." In early October, a local Islamist leader even went so far as to declare a "holy war" against Ethiopia. 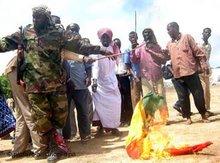 ​​Not a week goes by without Ethiopian President Meles Zenawi threatening the Union of Islamic Courts. The Christian-oriented nation to the west of Somalia fears the rise of an Islamic neighbor that could support the independence aspirations of ethnic Somalis in eastern Ethiopia. In addition, landlocked Ethiopia desperately needs access to Somalia's ports. This explains why for years Ethiopia has made security agreements with Somaliland and Puntland in northern Somalia. Should the Islamists succeed in strengthening their position in the south, many analysts predict that the semi-autonomous north would be their next target. There is no secret to the fact that Ethiopia is closely cooperating with the US in its fight against the Islamists. In late September, US Secretary of State Condoleezza Rice once again praised Ethiopia as a close ally in the "war on terror." In an effort to gather reinforcements for Ethiopian troops currently stationed in Baidoa, a prominent army commander is reportedly currently working to unite the fragmented militias in the region to fight against the Islamists who are only 30 kilometers from the city. Even Uganda could become embroiled in a potential war. In mid-September, residents in Baidoa were suddenly awakened at dawn when a Ugandan military transport plane landed at a local airstrip. Ugandan President Yoweri Museveni has repeatedly said that he would send in troops if requested by the transitional government.

Meanwhile, the Union of Islamic Courts has revealed that it is training 2,000 new troops at a number of camps in central Somalia. Journalists who were allowed to visit the camps report that there are military instructors from Pakistan and Afghanistan. According to US author Ken Menkhaus, the growing influence of jihadists threatens the security of the entire region: "This is also a problem for the Kenyans." The author of the book "Somalia: State Collapse and the Threat of Terrorism" is referring to US installations in Kenya that could be the target of terrorist attacks, similar to the US embassy bombings in August 1998. Refugees are another pressing issue. Since the beginning of the year, over 25,000 Somalis have fled to camps in northern Kenya, a region that is already unstable, and every week 2,500 more arrive. Kenya, which chairs the East African alliance IGAD, has already distanced itself from participation in a protective force for Somalia. Observers say that this is a measure of Kenya's mounting fears that it could become drawn into the vortex of conflicting interests and lose the negotiator role that took years to achieve in Somalia.

Marc Engelhardt © Qantara.de Translated from the German by Paul Cohen

Qantara.de Somalia The Hour of the Islamists While Somalia's interim government, established in December 2004, still can't assert its authority, Islamic groups have been expanding their power base. The radical jihad fighters are hoping the political vacuum provides them with their chance. Marc Engelhardt reports Interview with Nuruddin Farah A Miracle Child, Found and Set Free Nuruddin Farah has more than once been taken into consideration for the Nobel Prize of Literature. In this interview with Qantara.de, the Somali author talks about his new novel, the civil war and his practical optimism for Somalia "Shariacracy" in Nigeria Difficult Balance between Sharia and Human Rights A goat thief is punished more severely than a president who misappropriates government funds. The introduction of the Sharia has brought no improvements, Nigerian sociologist and economist Lamido Sanusi insists. By Lennart Lehmann

Organised by interfaith NGO Religions for Peace, an international conference in Lindau on Lake Constance is dealing with the peace-building role of women inspired by the faith of ... END_OF_DOCUMENT_TOKEN_TO_BE_REPLACED

The small East African nation of Djibouti has so far evaded musical discovery by the West. Now, however, the country's official national band, Groupe RTD, is picking up ... END_OF_DOCUMENT_TOKEN_TO_BE_REPLACED

The end of July saw the launch of the African Union’s "Sauti" digital publication, the first young feminist platform in Africa, which this year showcases stories by female youth ... END_OF_DOCUMENT_TOKEN_TO_BE_REPLACED

The outpouring of solidarity worldwide following the violent death of George Floyd should prompt us to step back and fundamentally question racist structures and privileges based ... END_OF_DOCUMENT_TOKEN_TO_BE_REPLACED

Jeddah is very different from other cities on the Arabian Peninsula, says Ulrike Freitag, historian of the Modern Middle East. In her book "A History of Jeddah", she explores the ... END_OF_DOCUMENT_TOKEN_TO_BE_REPLACED

END_OF_DOCUMENT_TOKEN_TO_BE_REPLACED
Social media
and networks
Subscribe to our
newsletter