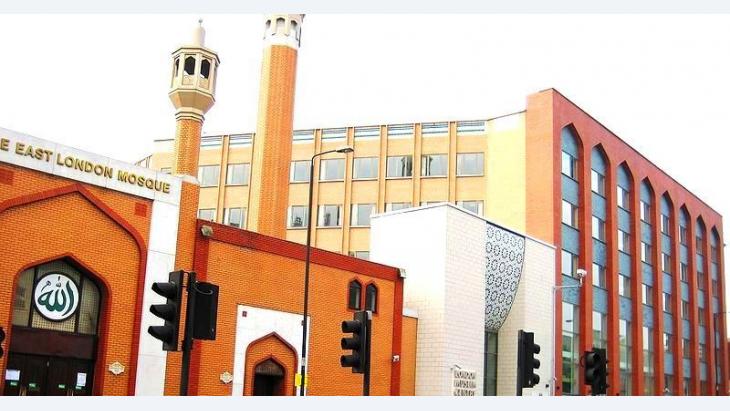 Islamophobia and Islam in Britain

The Battle for the Diversity of Tower Hamlets

﻿Historically, the borough of Tower Hamlets is a multicultural part of Britain's capital. Today, it is home to over 70,000 Muslims. But some critics say the place has become a hothouse for Islamic extremism. Joseph Burke takes a look into a multi-faceted conflict

"The East End was a kaleidoscope of people of many countries, races and characters. And from this emerged a colourful and ever-changing pattern." Thus wrote Vera Lynn in a 1967 history of east London's borough of Tower Hamlets. This 'kaleidoscope' is seen by many on the far right as a large sore on their idea of Englishness and last Saturday saw the English Defence League (EDL) challenge the 'Islamification' of this multicultural borough by holding a provocative protest there.

Tower Hamlets' diversity is renowned. French Huguenots, Irish and Jews settled there in their droves over the centuries. Today, it is home to over 70,000 Muslims, the largest proportion (36.4%) of Muslims to live in any English local authority. These are primarily of Bangladeshi origin, with some of Somali background also.

The centrepiece of Muslim life in Tower Hamlets is the one hundred and one year old East London mosque, which can hold some 5,000 people for prayers. Yet for some, like journalist Andrew Gilligan, Tower Hamlets is now a hive of extreme Islamism.

Signs of radical Islam in the heart of London 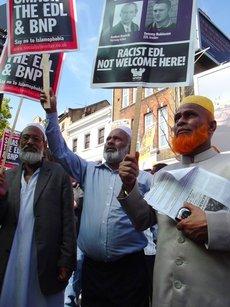 Anti-radical radicals? Three men in traditional Muslim clothing protest against the anti-Muslim propaganda of the EDL

​​"This is one of Britain's most important boroughs – the seat of its traditional power, and also its new financial power. But a new form of power is creeping in here too: organised Islamist fundamentalism," Gilligan asserts. Certainly, there are concrete reasons to be concerned. Notices have sprouted up in the area proclaiming "Shariah Controlled Zone – No music or concerts; No alcohol."

Public funded libraries were found to stock texts by noted Islamic extremists Abu Hamza al-Masri and Sheikh Abdullah al-Faisal, while local politicians have formally complained of open homophobia from the supporters of Muslim political opponents at council meetings. Whether these are indicative of a broader trend is unclear. In this knowledge vacuum media speculation has been rife.

In 2009 five members of Ahle Sunnah al Jamah protested at the Luton home-coming of the 2nd Battalion the Royal Anglian Regiment returning from service in Iraq with signs that read: "Anglian Soldiers Go to Hell". Locals were incensed and the event acted as a catalyst for the formation of the EDL. Its leader, Stephen Laxley Lennon, also known as "Tommy Robinson", is a convicted football hooligan. The EDL claims not to be racist but that its anti-Islamic agenda is a response to a radicalism inherent in the religion.

Dr. Matthew Goodwin, a specialist on far-right extremism at the University of Nottingham, says that "The EDL does not have the sophistication to hide behind an anti-Islam agenda. EDL members are genuinely Islamophobic; they are genuinely anxious about Muslims in British society." It is difficult to be precise on EDL membership, previous demonstrations saw upwards of 3000 people. 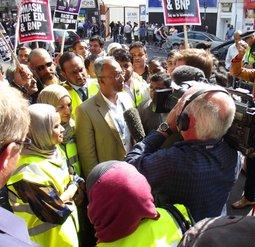 Unlikely allies: the anti-EDL activists received support from the Lesbian and Gay Coalition against Racism and the Jewish Orthodox Community. Pictured: Lutfur Rahman, Mayor of Tower Hamlets, at the rally for tolerance

​​The EDL's confrontational demonstration in Tower Hamlets on September 3rd was to boost its status amongst a fragmented English far-right. According to Martin Smith, National Officer of Unite against Fascism: "The EDL set this up as the big one." This made residents of Tower Hamlets, like Mohammed Shaheen, a Muslim father of two in the borough, nervous: "I've told my family to stay inside for the day."

Others drew parallels to the 1936 'Battle of Cable Street' when Jews, Irish dockers and Communists united successfully with chants of "No Pasarán" (They Shall Not Pass), borrowed from the Spanish Civil War, to repel Oswald Mosley's British Union of Fascists from marching through the borough.

A particular responsibility thus fell on the borough, according to Fr. Alan Green, Chair of the Tower Hamlets Inter-Faith Forum: "It is communities like Tower Hamlets that have a duty to defeat the EDL. We do represent the diversity that they dislike so much and we have to be robust in both celebrating that but also defending it."

Tensions were further heightened by the immediate national and international context. The riots across England, which led to 2000 arrests, had shaken society to its core. The prospect of EDL disciplinarians taking over the streets and violent clashes with their opponents was an ominous one for a government and police under scrutiny. 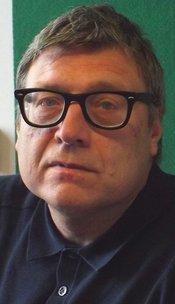 "Islamophobia seems to be the new racism." - Martin Smith, National Officer of 'Unite against Fascism'

​​Secondly, the devastating attack committed by Norwegian anti-Muslim terrorist, Anders Behring Breivik, renewed concerns around the far right. This was underlined when it emerged that Breivik had stated in his manifesto: "I used to have more than 600 EDL members as Facebook friends and have spoken with tens of EDL members and leaders. In fact; I was one of the individuals who supplied them with processed ideological material (including rhetorical strategies) in the very beginning."

On the day of the demonstration itself over 3000 police officers created a no-man's zone between opposing sides. The anti-EDL rally speakers included, amongst others, representatives of the Lesbian and Gay Coalition against Racism and the Jewish Orthodox Community, both of whom expressed their support for the targeted Muslim community.

Led by Mayor of Tower Hamlets, Lutfur Rahman, himself a Muslim, protesters undertook a 'symbolic march' towards police lines. Flushed with alcohol and sweating in the heat, EDL supporters heckled startled passers-by with chants of "You're not English anymore" to melodies more commonly heard at football stadiums. Missiles were thrown and scuffles broke out with police. Ultimately, the victory was for those opposing the EDL. Not only did they manage to outnumber the EDL's 1,000 supporters by 500, but the EDL, who had sixty of their members arrested, were kept crucially outside Tower Hamlets. The EDL did not pass.

The past decade has been difficult for British Muslims; Martin Smith believes that "Islamophobia seems to be the new racism, it is the acceptable face of racism." Shaifur Rahman, Executive Director of the Islamic Forum of Europe (IFE), a community organisation located beside the East London Mosque, says: "We have had a very rough ride in the past couple of years and it ties into the wider picture. Post-9/11, Muslim organisations have had a challenging time mainly due to the efforts of certain right wing media commentators who have been unrelenting on their attacks on Islam, on Muslims and Muslim organisations." 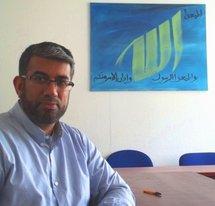 "Proud to be British": Shaifur Rahman, Executive Director of the Islamic Forum of Europe, says that Tariq Jahan has, under dramatic circumstances, acted as a role model for all Britons

​​The IFE itself has been accused of hosting preachers with hateful views and undermining liberal values. Amidst such bitter acrimony within English society, a new opportunity for progress has suddenly opened up from an unlikely source. Tariq Jahan, the Muslim father of a young man killed trying to protect his neighbourhood during August's riots, instantaneously became a source of optimism after he made a heartfelt public speech:

"The family has received messages of sympathy and support from all parts of the community, all faiths, all colours and backgrounds. Please respect the memory of our son and the grief of our family and loved ones by staying away from trouble."

Shaifur Rahman says that "A lot of journalists were writing 'Tariq Jahan has made me proud to be British. These are the values we can all identify with and promote.'" The emphatic show of support for Tower Hamlet's Muslim population against the EDL builds on Jahan's resolve to reach the ten year anniversary of 9/11 with genuine hope for the future.

Earlier this year, Prime Minister David Cameron pronounced multiculturalism a failure. Yet Tower Hamlets' multiculturalism is as old as the Conservative Party that he leads. Saturday showed that more people prefer the gritty reality of a pluralistic society with all the hard work that this requires than the monochrome myth the EDL aggressively chase after.

Germany's foreign policy is explicitly values-based. But what happens, Ralf Bosen asks, when democracy, the rule of law and human rights collide with the logic of trade and ... END_OF_DOCUMENT_TOKEN_TO_BE_REPLACED

No other Western poet was arguably so well-versed in the Koran or so fascinated by Islam as Germany's national hero, Goethe. In a new publication that examines all Goethe's ... END_OF_DOCUMENT_TOKEN_TO_BE_REPLACED

A deluge of books, movies, series and cover stories: ever since the events of 9/11, the West has seemed almost manically preoccupied with Islam. Yet this has rarely led to deeper ... END_OF_DOCUMENT_TOKEN_TO_BE_REPLACED

Twenty years after 9/11, the world is faced with the dual challenge of Islamophobia and anti-Westernism. Ahmet Kuru argues that Muslims in the West, well versed in both Western ... END_OF_DOCUMENT_TOKEN_TO_BE_REPLACED

Two decades after the attacks of 11 September 2001, the West faces the shattered debris of its failure – not only in Afghanistan, but also in Iraq, Syria, Libya and Yemen. What ... END_OF_DOCUMENT_TOKEN_TO_BE_REPLACED

Twenty years after 9/11, the United States is recalibrating its war policy. However, its assertions that the era of endless wars is over are a myth, writes Maha Hilal END_OF_DOCUMENT_TOKEN_TO_BE_REPLACED
Author:
Joseph Burke
Date:
Mail:
Send via mail

END_OF_DOCUMENT_TOKEN_TO_BE_REPLACED
Social media
and networks
Subscribe to our
newsletter