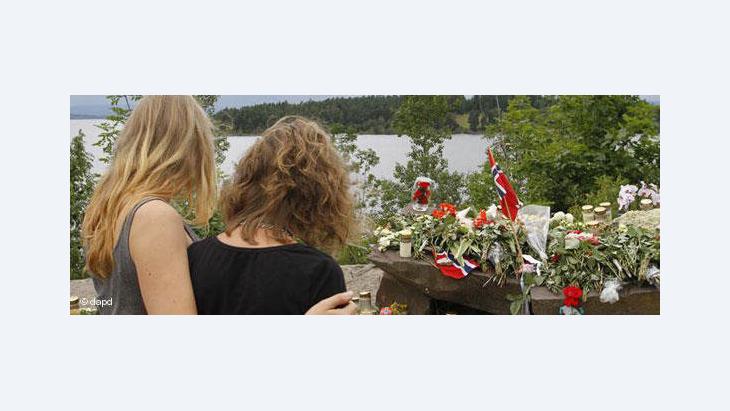 ﻿Geert Wilders and other anti-Islamists cannot be made responsible for Anders Breivik's killing spree – but their writings and statements have been sufficiently hysterical and hateful to incite a person with an unbalanced mind, writes Ian Buruma

Let us assume, for the sake of argument, that Geert Wilders, the Dutch politician who is convinced that Europe is "in the final stages of Islamization", is right: Anders Breivik, the Norwegian mass murderer, is mad. Wilders tweeted: "That a psychopath has abused the battle against Islamization is disgusting and a slap in the face of the worldwide anti-Islam movement."

This assumption is not so far-fetched. Murdering more than 60 innocent young people at a summer camp with an assault rifle, after bombing a chunk of central Oslo, is, to put it mildly, morally eccentric – something most sane people would never dream of doing.

The same is true, naturally, of a group of young men who decide to commit suicide and mass murder by flying commercial airliners into large public buildings in New York and Washington. But neither Breivik, nor the terrorists of September 11, 2001, killed without reason, in the way some nihilistic American shooters do. Islamists view their acts of random mass murder not as a personal publicity stunt, but as a tactic in a holy war against the decadent, sinful West.

Breivik is, in his own mind, a warrior for the other side. His aim was to protect the West from Islamization. His enemies are not just Muslims, but the liberal Western elites, and their children, who were destroying Europe from within through "multiculturalism" and "cultural Marxism." 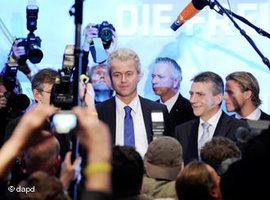 ​​In fact, what Breivik wrote in his rambling manifesto, entitled A European Declaration of Independence, is more or less what populists, such as Geert Wilders, have been saying. Of course, there was much else in the manifesto – fantasies about reviving the medieval Knights Templar, for example – that suggests a more bizarre disposition, and Wilders was quick to distance himself from Breivik's violent methods.

Indeed, only one right-wing European politician, Francesco Speroni of the Italian Northern League, which is part of Silvio Berlusconi's government, was prepared to defend Breivik. Speroni claimed that Breivik's "ideas are in defence of western civilization."

So, how seriously must we take the ideological reasons that killers like Breivik and the September 11 terrorists invoke to justify their murders?

A few years ago, the German writer Hans Magnus Enzensberger wrote a fascinating essay about the "radical loser". Radical losers are mostly young men who are so enraged by their own lack of social, economic, and sexual self-esteem and the indifference of the world around them, that they long for a suicidal act of mass destruction.

Anything can trigger such an act: rejection by a girl, being fired from a job, failing an examination. And sometimes the killers reach for ideological justifications: building pure Islam, struggling for communism or fascism, or saving the West. The particular ideals might be unimportant – simply those that happen to be available, owing to fashion or other historical circumstances. Once a radical loser is in the mood to kill, any reason will do. 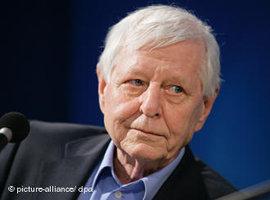 ​​Perhaps. But does this mean that there is no link at all between the stated views of radical clerics or politicians and the acts committed in the name of those opinions? For all the finger pointing at Wilders, just because Breivik professed to admire him, the acts of a deranged killer, others caution, should not be used to discredit what he stands for.

After all, there is nothing irrational, or murderous, about claiming that multiculturalism is a flawed ideal, or that Islam conflicts with modern Western European views of gender equality or gay rights, or that mass immigration will cause serious social conflicts.

These claims began to be made by respectable conservatives, and even some social democrats, in the 1990's. They reacted against a rather smug liberal establishment that tended to dismiss all critical thought about immigration or non-Western faiths and traditions as racism and bigotry.

The language of existential war

But, while there was nothing intrinsically wrong with discussing the social consequences of large-scale immigration from Muslim countries, some populists in Holland, Denmark, France, Germany, Belgium, Britain, and other countries, went much further.

Wilders, in particular, likes to speak in apocalyptic terms of "the lights going out over Europe", and "the sheer survival of the West". And, according to Wilders, the problem is not just a particular strain of violent revolutionary Islam, but Islam itself: "If you want to compare Islam to anything, compare it to communism or national socialism – a totalitarian ideology." 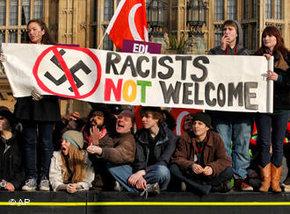 "Murderous ideas in defence of western civilization": anti-Wilders protests in London in 2010

​​This is the language of existential war, the most dangerous kind. Indeed, the terminology of World War II is being deliberately revived. Those who oppose radical hostility to all forms of Islam are "appeasers" of, or "collaborators" with, "Islamofascism." For some, September 11, 2001, was analogous to 1938, or even 1940. The very survival of Western civilization is at stake. Is it really so surprising that certain people might mistake this rhetoric for a call to arms?

To be sure, neither Geert Wilders, nor even rabidly anti-Islamic bloggers in the United States, such as Scott Spencer and Pamela Geller (both of whom were quoted extensively in Breivik's manifesto), have called for physical violence. But their writings and statements have been sufficiently hysterical and hateful to incite a person with an unbalanced mind. Indeed, Breivik's interpretation of their words is, in an odd way, more rational than the idea that a war for our very survival can be fought with words alone.

Ian Buruma is Professor of Democracy and Human Rights at Bard College, and the author of "Taming the Gods: Religion and Democracy on Three Continents".

Home
Print
Newsletter
More on this topic
Interview with Gudrun Krämer: Fighting Islamophobia with Rational ArgumentsThorsten Gerald Schneiders on Hostility towards Islam: ''An Outlet for Suppressed Intolerance''
Related Topics
Islam and the West, Islam in Europe, Islamophobia
All Topics

Germany's foreign policy is explicitly values-based. But what happens, Ralf Bosen asks, when democracy, the rule of law and human rights collide with the logic of trade and ... END_OF_DOCUMENT_TOKEN_TO_BE_REPLACED

No other Western poet was arguably so well-versed in the Koran or so fascinated by Islam as Germany's national hero, Goethe. In a new publication that examines all Goethe's ... END_OF_DOCUMENT_TOKEN_TO_BE_REPLACED

A deluge of books, movies, series and cover stories: ever since the events of 9/11, the West has seemed almost manically preoccupied with Islam. Yet this has rarely led to deeper ... END_OF_DOCUMENT_TOKEN_TO_BE_REPLACED

Twenty years after 9/11, the world is faced with the dual challenge of Islamophobia and anti-Westernism. Ahmet Kuru argues that Muslims in the West, well versed in both Western ... END_OF_DOCUMENT_TOKEN_TO_BE_REPLACED

Two decades after the attacks of 11 September 2001, the West faces the shattered debris of its failure – not only in Afghanistan, but also in Iraq, Syria, Libya and Yemen. What ... END_OF_DOCUMENT_TOKEN_TO_BE_REPLACED

Twenty years after 9/11, the United States is recalibrating its war policy. However, its assertions that the era of endless wars is over are a myth, writes Maha Hilal END_OF_DOCUMENT_TOKEN_TO_BE_REPLACED
Author:
Ian Buruma
Date:
Mail:
Send via mail

END_OF_DOCUMENT_TOKEN_TO_BE_REPLACED
Social media
and networks
Subscribe to our
newsletter