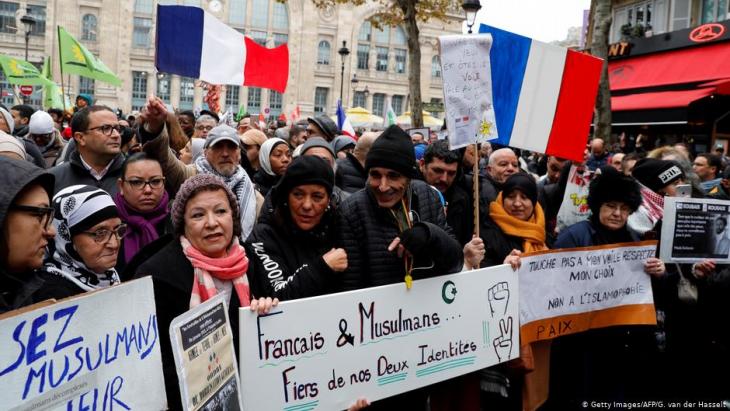 France is locked in a row over Islam, Islamophobia and the headscarf. But one key voice is almost completely missing from the debate – that of the women who wear the veil. By Nadia Pantel

They’ve gathered in this cafe to talk about their understanding of destiny. Eight men and six women who have responded to the Facebook invitation of Chahira Coach, posted in the group "Muslim Meetup" in Paris. Coach is a practicing Muslim and this afternoon she wants to discuss the subject of spirituality. Coach covers her hair with a scarf that she’s tied into a turban. "Because that’s how I live my faith," she says.

But the headscarf has yet again become a political symbol in France this autumn. And as a result there is no one at this meet-up, over milkshakes and chocolate, who doesn’t want to talk about how it feels to belong to a country that is locked in a permanent dialogue over how – and ultimately also whether – co-existence with practicing Muslims should be managed.

"I’ve only got to turn on the TV and there’s someone explaining how dangerous I am," says Sarra. She works as a secretary and prefers not to divulge her family name. She also doesn’t cover her head. "I’d actually like to wear it," she says "but it would make a lot of things more difficult."

Coach relates how in the past, she would swap her headscarf for a cap to avoid being hassled – "at some point it started feeling schizophrenic" she says. These days, she makes sure her headscarves are brightly coloured. "If you wear black, the response is even more negative," she adds.

Depending on your perspective, the current debate in France over Islam’s place in society either began on 28 September or 3 October. On 28 September, at an event held by the right-wing extremist figurehead Marion Marechal, niece of the politician Marine Le Pen, the journalist and commentator Eric Zemmour gave a speech that could justifiably be interpreted as a call for a civil war broadcast live on television. 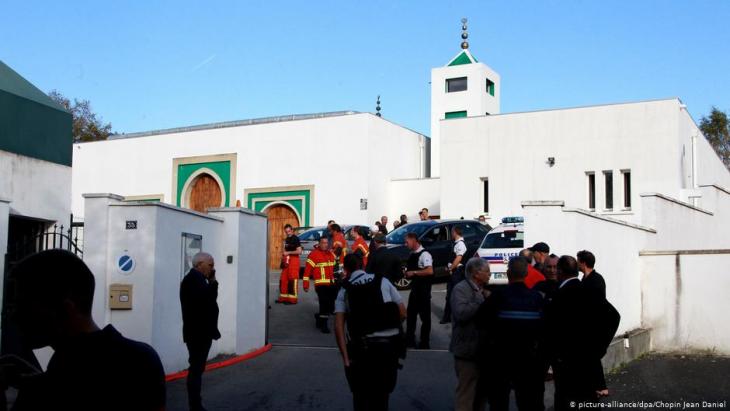 Hate sells: at the end of October, an 84-year-old attempted to burn down the mosque in Bayonne in southern France and shot two believers. It didn't take long for the investigators to announce: the perpetrator was a Zemmour fan

Zemmour spoke of the "war of annihilation against the white, heterosexual man", of the  "totalitarianism of Islam" that has destroyed democracy in France, of the "population replacement" and of the "demographic" takeover of France by Muslims.

The radical nature of the speech was no surprise; Zemmour has twice been condemned in the courts for his regular racist and Islamophobic statements. But hatred sells. Viewing figures for the broadcaster CNews have tripled since Zemmour began appearing on the channel four nights a week to comment on global news stories. When an 84-year-old tried to burn down the mosque in the south-western city of Bayonne last week, shooting two worshippers in the attack, it wasn’t long before investigators declared: the perpetrator was a Zemmour fan.

France is now conducting a debate on Islamophobia, on violence against minorities and on media standards. And no one is listening. This is because it must compete with a new production of the favourite French debate being aired at the same time: the headscarf row.

A convergence of many divisive issues

The debate is an old one; it began back in the 1990s. But in recent years, its tone has been heightened by the series of Islamist terror attacks costing more than 200 lives in France since 2015. And so it is not surprising then that the latest round of the headscarf discussion began shortly after the attack on the police headquarters in Paris. On 3 October, an employee at the agency killed four of his colleagues. Investigators believe there was a terrorist background to the attack; at the funeral service for the victims, President Emmanuel Macron spoke of the "Islamist hydra" that must be brought under control.

Officially, the current discourse is focussed on the question of whether Muslim mothers who wear a headscarf should be allowed to accompany their children on school trips. Last week, the conservative-led Senate approved a bill banning mothers from wearing headscarves on school field trips. And the government has so far failed to agree on a common position.

Among Muslims, the image of women as "cossetted hijab-wearing princesses" is frequently invoked. But Muslim women have long wanted to be more. In her essay, Karoline Roscher- ... END_OF_DOCUMENT_TOKEN_TO_BE_REPLACED

Even in times of war and pandemic, refugees are still being deported to Afghanistan. Several deportation flights have taken place in recent weeks alone. Since those affected often ... END_OF_DOCUMENT_TOKEN_TO_BE_REPLACED

Surging coronavirus cases in many parts of the world have overshadowed the start of this year's Muslim holy month of Ramadan, with festivities once again curtailed by contagion ... END_OF_DOCUMENT_TOKEN_TO_BE_REPLACED

German Middle East analyst Guido Steinberg and television journalist Ulrich Tilgner have both published new books on the conflicts in the Middle East. Their analyses and their ... END_OF_DOCUMENT_TOKEN_TO_BE_REPLACED

On 27 March, Iran and China signed a 25-year accord intended to foster "strategic co-operation". Despite ongoing uncertainty over the deal's actual scope, content and chances of ... END_OF_DOCUMENT_TOKEN_TO_BE_REPLACED

END_OF_DOCUMENT_TOKEN_TO_BE_REPLACED
Social media
and networks
Subscribe to our
newsletter