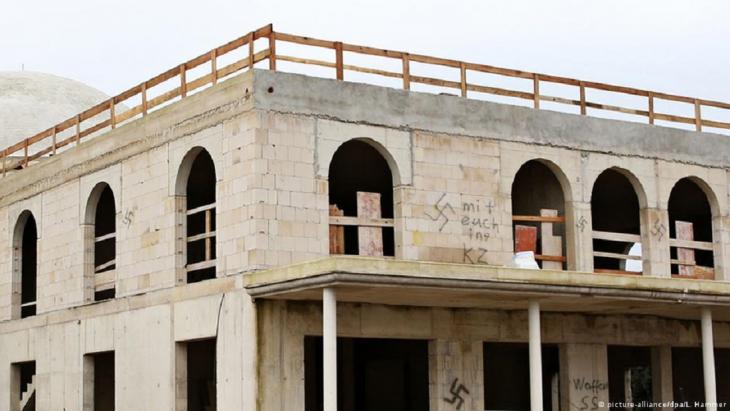 Muslims in Europe regularly experience threats, witness attacks and are the target of hate across national borders. Now the Council of Europe, the continent's leading human rights organisation, is to examine the problem and make recommendations to policymakers on how they can better tackle Islamophobia. By Christoph Strack

Imam A.* remembers a paint attack on his mosque in a small western German town: "Once, several years ago someone spray-painted huge swastikas right across our walls and windows," he remembers. It was just one of many. Have there been more in recent years? "I can answer that clearly in the affirmative," says the imam.

On a scale of one to ten, he used to estimate the extent of attacks and hatred at two – today he would say it was six or seven. (The cover picture above shows a mosque in Dormagen in 2014, not the mosque mentioned in the text. The full name of the imam and where he lives have been intentionally left out).

Islamophobia and anti-Semitism have become an everyday occurrence in Germany. The country's Interior Ministry registered 1,026 anti-Muslim attacks in 2020. These statistics are the official cases. Yet it is not only in Germany that Muslims are increasingly being targeted with hate and threats of violence. Online hate speech is particularly on the rise.

The Council of Europe's Special Representative on Antisemitic and Anti-Muslim Hatred, Daniel Holtgen, has been following up on reports from Muslim associations in eight European countries. The results are not comprehensive, he cautions, but they are the basis for further research and need to be followed up by the authorities in the countries in question. 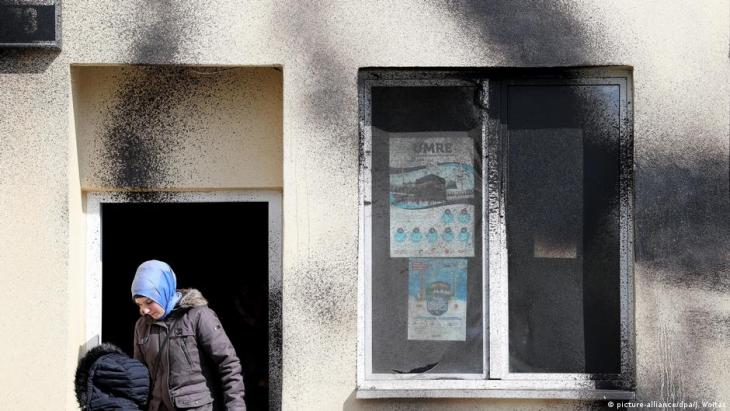 Paint attack on a mosque in Leipzig 2017: has the number of attacks gone up in recent years? "I can answer that clearly in the affirmative," says Imam A. from a small town in western Germany. On a scale of one to ten, he used to estimate the extent of attacks and hatred at two – today he would say it was six or seven. The imam does not want to appear with his full name for security reasons. A few years ago, unknown persons smeared a large swastika on the wall of his mosque

The victims describe online hatred and threats to be just as real as everyday discrimination and verbal attacks on the streets, says Holtgen. Increasingly coarse and brutal language, unveiled threats to life and limb, calls for racist violence have all become facts of daily life for Muslims. "These are criminal actions. This has nothing to do with the right to free speech," he adds.

And such threats and intimidation take their toll, says Imam A. After the swastikas were painted on the walls of his mosque, instead of the usual 100 attendees, only 10 people came to Friday prayers that week, he remembers. Young Muslims in particular stayed away because they were afraid. A police investigation yielded nothing. The mosque later moved to a location where there is video surveillance on all sides of the building.

Imam A. says he regularly receives messages reading "Go home" or "there is no place for you here". "The letters are either typewritten or made of individual letters from newspaper headlines, cut out and pasted together. We get letters like that almost every day." Sometimes, Imam A. says they include cartoons depicting the Prophet Muhammad. 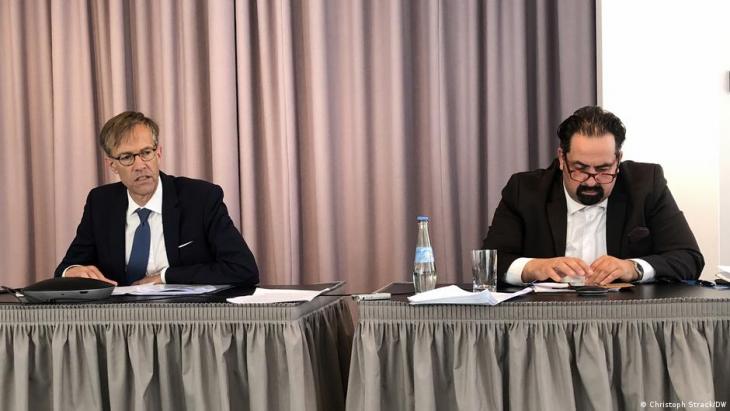 The Council of Europe's Special Representative on Antisemitic and Anti-Muslim Hatred, Daniel Holtgen (left) and Aiman Mazyek, Chairman of the Central Council of Muslims in Germany: hate against Muslims on the net is a "recent phenomenon", said Mazyek. However, hatred has "skyrocketed" in recent years. In 2020 alone there were more than 1,000 criminal incidents and almost 150 physical attacks on mosques across Germany. Mazyek hopes the Council of Europe's survey will give fresh momentum to more decisive action against this kind of aggression. "Just like anti-Semitism and racism, the attacks on Muslims are an attack on freedom and democracy," says Mazyek

Holtgen has found out why the majority of hate speech is not reported: the victims either don't know who to report it to or simply believe reporting it is pointless and won't really make a difference.

The majority of postings are made anonymously, which allows users to post racist and even dangerous comments without having to fear real repercussions. "The majority of hate mail is sent anonymously. But the inhibition threshold is sinking. It is increasingly considered acceptable, so to speak, to post really dangerous and racist statements on the Internet. That is very worrying," says Holtgen.

The Council of Europe's Special Representative says the Internet is too much of a legal vacuum and it encourages copycat perpetrators. The terrorist who attacked a synagogue in Halle in 2019 streamed his actions online, copying the procedure he had seen in the attack on a mosque just months before in Christchurch, New Zealand.

Holtgen points out that the first step to better controls was made with EU legislation late last year: it holds online platforms responsible for the content posted on them. "Now," he says, "we must make sure that these platforms actually adhere to the law."

A threat to democracy

The chairman of the Council of Muslims in Germany, Aiman Mazyek, agrees that online hatred is a "recent phenomenon". But the number of cases has skyrocketed.

In 2020 alone there were more than 1,000 criminal incidents and almost 150 physical attacks on mosques across Germany. Mazyek hopes the Council of Europe's survey will give fresh momentum to more decisive action against this kind of aggression. "Just like anti-Semitism and racism, the attacks on Muslims are an attack on freedom and democracy in our country," says Mazyek. 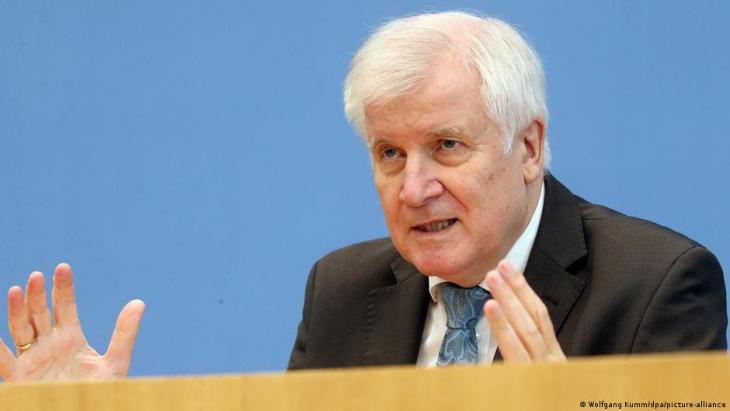 Praise for German Interior Minister Horst Seehofer (CSU): He established the "Council of Experts on Islamophobia" in September 2020. Daniel Höltgen, Council of Europe Special Representative on Anti-Semitism and Anti-Muslim Hatred considers the establishment of the panel exemplary in the fight against Islamophobia. "I would like to recommend it to other countries as well." The panel could serve as a "role model"

Holtgen is reluctant to make concrete assessments relating to the policies of different EU countries. But he singles out German Interior Minister Horst Seehofer for praise: the council of experts Seehofer established in September 2020 could be a model for other countries, he says. This independent council on Islamophobia is made up of 12 scholars tasked with analysing new expressions and changing forms of anti-Muslim sentiment and how they correspond to anti-Semitic and misanthropic tendencies in German society.

Holtgen stresses that the Council of Europe has probed only eight of the 47 Council members – but of these eight, several boast the largest Muslim communities: Germany, France, UK and Austria.

The European Commission on Racism and Intolerance (ECRI) is planning to publish concrete political recommendations within the next few months to give politicians guidelines for combatting anti-Semitism and Islamophobia.

Imam A. hopes that concrete suggestions may lead more politicians and journalists alike to just come and stop by his mosque in person. "We are not a black box. We are just part of society."

Home
Print
Newsletter
More on this topic
Islamophobia: Criticism of religion? Blatant racism!Islam and the West: What Islamisation?Islamisation, a racist conspiracy theory: The hatred of Hanau and its enablersThe rights of Muslims in Germany: Protected by the German constitution
Related Topics
AfD | Alternative for Germany, Anti-Semitism, European Islam, Islam in Germany, Islamophobia, Judaism | Jews, Mosques in Germany, Muslim associations in Germany, Muslims in the West, Racism | discrimination, Right-wing populism, Rule of law
All Topics

Since Ali Khamenei, Iran's most powerful man, has openly and unconditionally come out in support of Putin's war in Ukraine, logistical help is on its way, with an allegedly ... END_OF_DOCUMENT_TOKEN_TO_BE_REPLACED

Tourists have been returning to Tunisia, Egypt and Morocco. But, given the global uncertainty caused by the Ukraine war, will the comeback be enough to save a struggling sector, ... END_OF_DOCUMENT_TOKEN_TO_BE_REPLACED

The highly controversial Indian blockbuster "The Kashmir Files“, on the exodus of Kashmiri Hindus in the 1990s, is characterised by unilateral representations, negative ... END_OF_DOCUMENT_TOKEN_TO_BE_REPLACED

"Flugt" is the world's first museum dedicated to the stories of those forced to flee. The new museum, which focuses on the fates of refugees then and now, is housed in a former ... END_OF_DOCUMENT_TOKEN_TO_BE_REPLACED
Author:
Christoph Strack
Date:
Mail:
Send via mail

END_OF_DOCUMENT_TOKEN_TO_BE_REPLACED
Social media
and networks
Subscribe to our
newsletter