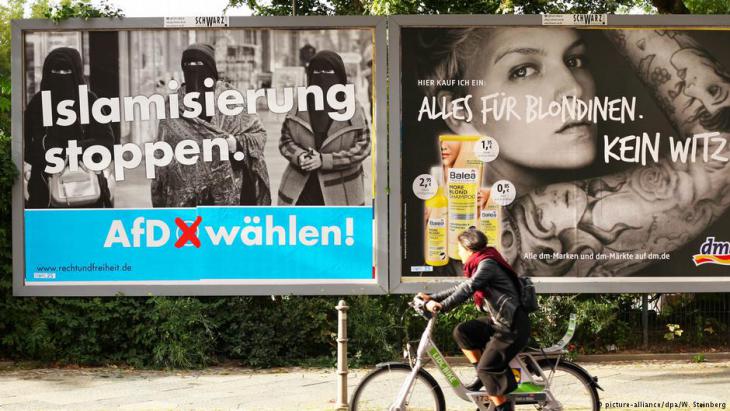 Islamophobia in Germany
"We need a new debate about racism"

Why are people bothered when an academic wears a headscarf, but don't mind one worn by a cleaning lady? Extremism researchers are studying how and why attitudes towards Muslims are changing. The rise of the AfD is viewed as an important factor. By Kay Alexander Scholz

Through the right-wing PEGIDA movement and the AfD, anti-Muslim racism has taken on organised forms both socially and politically. This is the conclusion reached by racism researcher Yasemin Shooman. At a press conference held by the Berlin-based "Mediendienst Integration" (Media Service for Integration), she said that a negative and dismissive attitude towards Islam and Muslims has existed for a long time.

When former German President Christian Wulff said in 2010 that Islam was a part of Germany, he set off a fierce debate. Shooman also referred in her talk to older studies, in which around half of the respondents agreed that there were too many Muslims in Germany. The AfD builds upon attitudes like these.

Asked about the reasons behind these notions, Shooman proposed two theses. Paradoxically, much of it has to do with the rise and integration of minorities. The headscarves brought to Germany by the Turkish guest workers did not ruffle any feathers as long as they were worn by cleaning ladies, said Shooman. They only started bothering people when they were seen on academics. Back when mosques were still hidden in back courtyards, there were fewer protests than there are now, as they become visible features of the cityscape.

Why is it always about differences?

"We need a new debate about racism," Shooman enjoined. It should not be limited to the extreme right-wing fringe, she said, but must be conducted right at the heart of middle-class society. These are the people who sometimes feel their needs are being addressed by the right-wing populists. 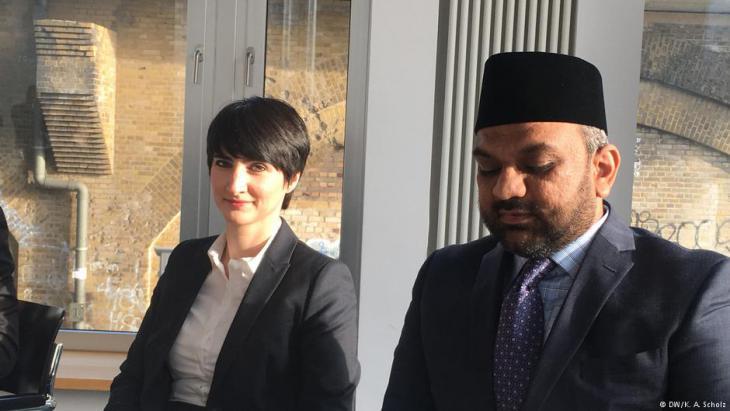 From victims to perpetrators: the AfD claims that a "birth jihad" is being waged, an Islamic invasion of Europe through high birth rates. The truth is that Muslims are increasingly not being adequately protected by law enforcement, explains racism researcher Shooman. There were 91 attacks on mosques in 2016 alone. All the talk of an "Islamic bomb" shows how the AfD has pushed the boundaries of what can be said in public, at the expense of the Muslims

It is important to clarify why questions of identity are always stated in terms of what makes people different, rather than what they have in common. What functions does stigmatisation serve? To what extent do Muslims end up being a projection screen for reservations against other social minorities?

Suleman Malik, state spokesman for the Ahmadiyya Muslim Community in Thuringia, reported on the mosque dispute in the state capital of Erfurt, which has been fuelled in part by the AfD and the identitarian movement. A few days before, Bjorn Hocke, head of the Thuringian AfD, had called for a big demonstration, speaking of a "necessary de-Islamisation". "There were some militant Nazis among the protesters," said Malik.

Yasemin Shooman pointed out that a reversal of roles between perpetrator and victim is being propagated by some members of the AfD. There are claims that a "birth jihad" is being waged, an Islamic invasion of Europe through high birth rates. The truth is that Muslims are increasingly not being adequately protected by law enforcement, said Shooman. There were 91 attacks on mosques in 2016 alone. All the talk of an "Islamic bomb" shows how the AfD has pushed the boundaries of what can be said in public, at the expense of the Muslims.

Muslims are being subjected to a "modernised" form of racism by the political right, Shooman contends. Whereas people used to chant "Foreigners out!", the Muslims are now cast in the role of the enemy. Racism has been modernised, with the aim of making it socially acceptable in the midst of civil society.

Measuring the AfD by its deeds 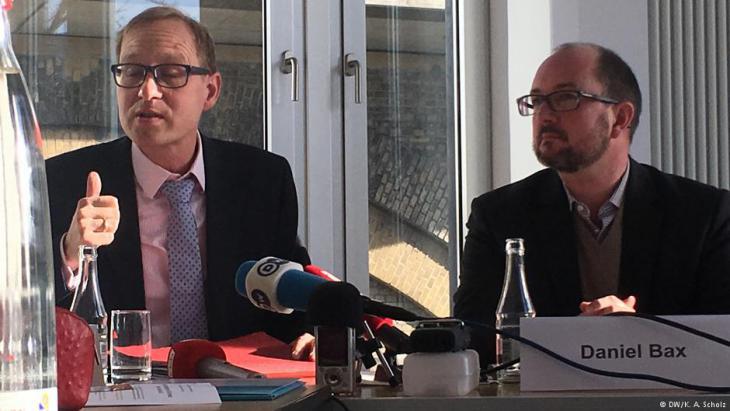 Right-wing populists limit freedom of faith and conscience: Daniel Legutke, human rights expert with the "German Commission Justitia et Pax", a leading Roman Catholic advisory body in Germany, pleaded for close monitoring of the AfD′s constitutional compliance within both state and federal parliaments. The right-wing populist party includes "highly problematic" passages in both its basic policy statement and election manifestos, particularly with regard to religious freedoms

"Countering the trend is only possible through dialogue," said Suleman Malik and reported on a meeting with the AfD co-chairman Jorg Meuthen. The topic was a dispute on content. Not everyone in the AfD is a right-wing extremist, said Malik. The party must be measured by its deeds

Shooman was more sceptical, particularly as any debate can be exploited by the right-wing populists for their own ends or readily turned into a scandal. It is important to determine what the goal of this scandal might be, she said, whether it is really about finding a joint solution or just coming up with arguments as ammunition for further stigmatisation.

What does freedom of religion actually mean?

Daniel Legutke, a human rights expert and advisor to the Roman Catholic Church in Germany, asked on what basis such a dialogue could even take place. He does not believe that the AfD is interested in safeguarding Muslims' right to practice their religion.

The AfD limits freedom of religion to freedom of faith and conscience, Legutke continued. But the actual practice of religion would be limited if the headscarf, the Muezzin's call to prayer and minarets were to be prohibited. The AfD is thus concerned with the content of the religion. The benefit of freedom of religion, however, is precisely that state does not interfere in its contents.

Legutke also spoke about the perennial German debate regarding a leitkultur, or "dominant culture". The AfD would define this culture as Christian-Jewish-Occidental. As a representative of the Christian churches, Legutke strongly opposes being co-opted in this way, saying: "We are not, after all, a cultural association."

Extremism researcher Yasemin Shooman went further than the others in her assessment of the situation for Muslims in Germany after the AfD's electoral success. She warned of a new racism. One must not underestimate the effect certain statements may have on children and young people, she cautioned. When people say, for example, that there are too many Muslims in Germany! What should the consequence be? Shooman called it "a lesson in demagogy".

Giessen, Eichsfeld, Kusel, Berlin – cars bearing old German number plates are the latest trend on the streets of Cairo. Many Egyptians regard the discarded plates as chic. What ... END_OF_DOCUMENT_TOKEN_TO_BE_REPLACED

Tunisia has been going through a severe economic and political crisis in recent years. More than one in three young people there are unemployed. For many skilled, qualified and ... END_OF_DOCUMENT_TOKEN_TO_BE_REPLACED

German imams have publicly expressed their solidarity with the women of Afghanistan. In a letter of protest, the clerics say that the Taliban regime's decree barring women from ... END_OF_DOCUMENT_TOKEN_TO_BE_REPLACED

At the end of every year, the team at Qantara.de gives you a run-down of the ten most-read articles on the site over the past 12 months. Here is a quick overview of the stories ... END_OF_DOCUMENT_TOKEN_TO_BE_REPLACED

Social engagement is often motivated by religious factors. A new book explores the background to these community efforts and appraises how effective they are in helping to ... END_OF_DOCUMENT_TOKEN_TO_BE_REPLACED

The government in the Netherlands, one of the last European nations to abolish slavery, has made an historic apology. But some feel that there is still a long way to go. By Ella ... END_OF_DOCUMENT_TOKEN_TO_BE_REPLACED
Author:
Kay-Alexander Scholz
Date:
Mail:
Send via mail

END_OF_DOCUMENT_TOKEN_TO_BE_REPLACED
Social media
and networks
Subscribe to our
newsletter