In Ismaël Ferroukhi's recent film, a father and his son go on the Hadj, the pilgrimage to Mecca. In his contemplative road movie, the director emphatically portrays the conflict between generations and cultures. By Amin Farzanefar

​​Young Reza, child of the suburbs, at home on his mountain bike, has a fundamentally different vision of life than his father, who has clung to his Moroccan traditions for thirty years. But when the old man asks him to accompany him on a pilgrimage to Mecca – the biggest event in the life of a devout Muslim, the son cannot refuse his pious request.

And since Papa is afraid of flying, they drive 5000 kilometers through a Europe marked by upheaval – Italy, the former Yugoslavia, Bulgaria, Turkey – all the way to Saudi Arabia.

"For the first thousand kilometers they can still remain the way they were. After two thousand kilometers the facades start crumbling, and after three thousand they have to abandon their old roles. And then they are forced to take a good look at each other," says director Ismaël Ferroukhi, who places his antithetical characters within the tight confines of a rickety Peugeot and spends the rest of the film watching what happens.

The deep chasm between generations and cultures is expressed by showing Reza at home well "assimilated" with cell phone and girlfriend, yet still bossed around by his older brother. At the beginning of the journey he also has to negotiate every small matter with his father. But gradually, without many words, father and son learn to forge bridges between the spiritual and the secular, the French and the Arabic. 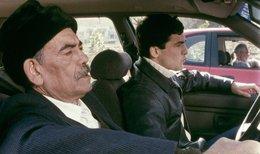 ​​The mental and emotional landscape within the car is nearly more important to the director than the European cultural landscape on the outside, which has many adventures in store for the pilgrims: A friendly Turkish interpreter who suddenly invites himself along on their journey to Mecca turns out to be a crook (or perhaps not…), a mysterious old man who is eerily silent as he travels with them in the car – such odd travel companions give father and son many opportunities to examine their opinions and prejudices and to throw their secure and treasured worldviews out the window.

At the same time these encounters are episodic – and instead of repeating well-worn fantasies of the Balkan and Orient or showing the customary tourist panoramas, Ferroukhi's interest remains primarily focused on the concrete details of their experiences. Only at the end of the journey does the camera gaze expand along with the horizon of the main protagonists.

According to the press release, "Le Grande Voyage" is the first feature film allowed to be shot on location in Mecca, and indeed the energy of two million pilgrims strikes another evocative chord.

Sometimes it takes a while for a film to make it to the screen. The script for the international hit "Goodbye Lenin," for instance, sat on the shelf for over ten years before it could be realized and start its triumphal march. The script Ismaël Ferroukhi carried around in his bag for six years most likely received the attention it deserved as a result of September 11: a film project portraying the peaceful aspects of Islam appeared worthy of funding in light of the recent flare-up of hostile images.

​​But the premiere of the final version of the film also coincided with dramatic current events: "Le Grande Voyage," Ferroukhi's debut film starts in the banlieus that are currently occupying the headlines, in the milieu of Moroccan immigrants.

Despite the topical references Ferroukhi has avoided catering to the obvious platitudes about the "Peacefulness of Islam" and the like. "Le Grande Voyage" offers no "Orient for Beginners" scenario; nor is it a critical milieu study or a social film striving for topicality. Above all it is a personal and lightly touching story of a very human encounter narrated as a road movie, a genre that has always been concerned with transformations and transitions.

Deeper meaning, revealed at the end

The variation on this old, familiar narrative genre is not necessarily Ferroukhi's strength – the development of action and characters is straightforward, yet everything the two kindred travelers experience is subject to a deeper meaning, which is only revealed at the end.

The film is narrated with a contemplative minimalism and its main impact arises from the interaction of the main protagonists. Muhammed Madjd as the stubborn old man who is visibly more at home in the East, and Nicolas Cazale as the nervous, hysterical Reza, inflexible in his rebellion, sensitively work through their conflict: periods of impulsive bickering alternate with long passages of sulking, the wordless rapprochement through glances and gestures and finally tacit acquiescence (incidentally, Madjd is a well-known actor who has appeared in many Moroccan films during the last few years, including "Ali Zaoua," "Mille Moism," "Le chevalier de vent").

Ferroukhi's film received a well-deserved award at the Venice Film Festival for the best feature film debut. We hope he will not have to carry his next script around for another six years.

Bosnian Film
Life among War Ruins
For a long time, Bosnia has been associated with nothing but war and destruction. But in 2001 with the film "No Man's Land," we were finally reminded that Bosnia has a cinema tradition. Thanks to state funding and the largest film festival in Southeast Europe, Bosnia's film industry is burgeoning again

Turkish Cinema
A Nation and Cinema Industry Divided
In the 1970s, Turkey's Yesilcam studios churned out 300 films every year. Nowadays, production has slowed to between twelve and twenty films per annum. The reasons for the crisis in Turkey's film production sector are manifold. Amin Farzanefar reports

END_OF_DOCUMENT_TOKEN_TO_BE_REPLACED
Social media
and networks
Subscribe to our
newsletter