Christians in the Gaza Strip will not be allowed to visit holy cities such as Bethlehem and Jerusalem to celebrate Christmas this year, Israeli authorities have announced.

Gazan Christians will be granted permits to travel abroad but none will be allowed to go to Israel and the occupied West Bank, home to many sites holy to Christians, a spokeswoman for Israel's military liaison to the Palestinians said.

Israel tightly restricts movements out of the Gaza Strip, territory controlled by Hamas, an Islamist group that it considers a terrorist organisation. The spokeswoman said that following "security orders", Gazans would be allowed to travel abroad via Israel's Allenby Bridge border crossing with Jordan, but not to visit cities in Israel or the West Bank.

Gaza has only around 1,000 Christians - most of them Greek Orthodox - among a population of 2 million in the narrow coastal strip.

This year's decision is a break with usual policy. Last year, Israel granted permits for close to 700 Gazan Christians to travel to Jerusalem, Bethlehem, Nazareth and other holy cities that draw thousands of pilgrims each holiday season.

An eye-catching tableau for resistance: graffiti art in Bethlehem

In 2002, the then Israeli Prime Minister Ariel Sharon approved the construction of a barrier wall that would run along the ceasefire line of 1949 with the intention of separating Israeli territories from the Palestinian West Bank. In Bethlehem, graffiti artists have started using the wall as a canvas for political protest and socially critical art. By Laura Overmeyer 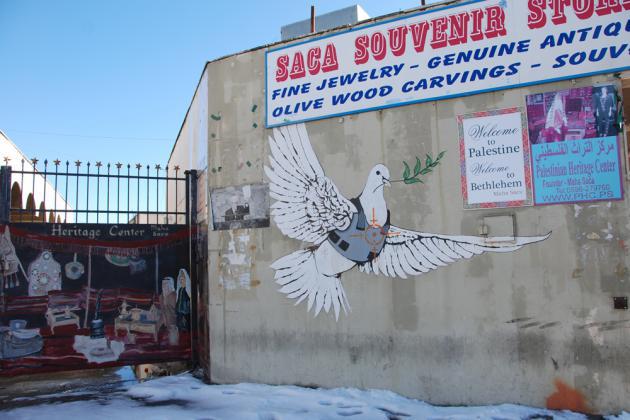 The trailblazer: in 2005, the legendary British street artist Banksy visited the West Bank and left behind nine stencilled graffiti images on the wall and on private buildings in and around Bethlehem. His satirical and critical commentary on Israel's occupation policy marked the start of an onslaught of international and Palestinian graffiti artists – amateurs and professionals alike – who have adorned the wall with their political and personal messages. 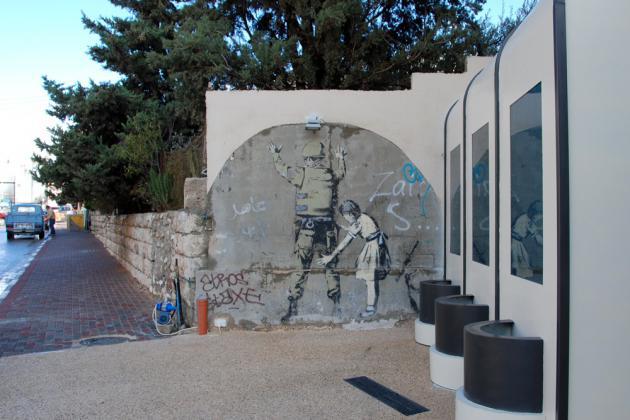 Black humour: many of Banksy's early and later works still exist today, such as his famous "Flower Thrower" and the little girl frisking an Israeli soldier. Some images have been painted over by other artists or even removed out of protest, as a number of Palestinians don't like the British artist's signature black humour. 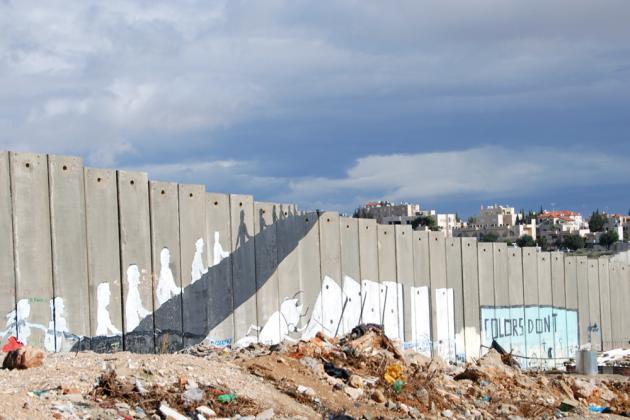 Escape by escalator: in 2007, Banksy started the "Santa's Ghetto" artist initiative and organised a gathering of internationally renowned "street artists" in Bethlehem (including Mark Jenkins, Sam3, Ron English, Eircailcane, Swoon, and Faile) in order to draw attention to the political situation in the occupied territories. The Italian graffiti artist Blu also contributed with a work on the Israeli barrier opposite the UN refugee camp Aida. 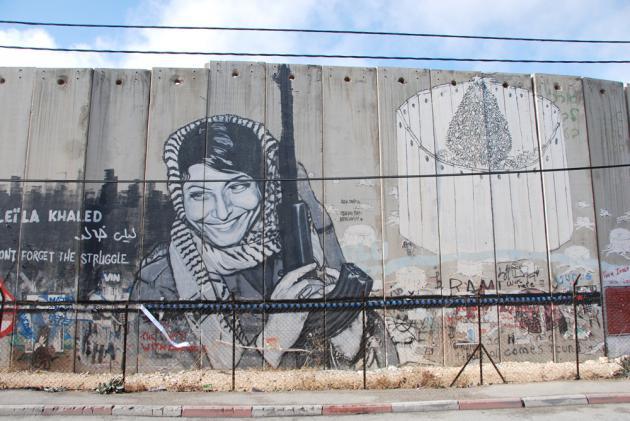 Of hijackers and Christmas trees: this section of the wall features a portrait of the PFLP plane hijacker Leila Khaled and, on the right, a walled-up Christmas tree by the graffiti artist Blu. Bethlehem is characteristically symbolised by Christmas motifs. It remains a matter of interpretation, however, what the artist intended to convey with the image of the dead tree stumps outside of the wall. The power of destruction? Avarice? Hypocrisy? 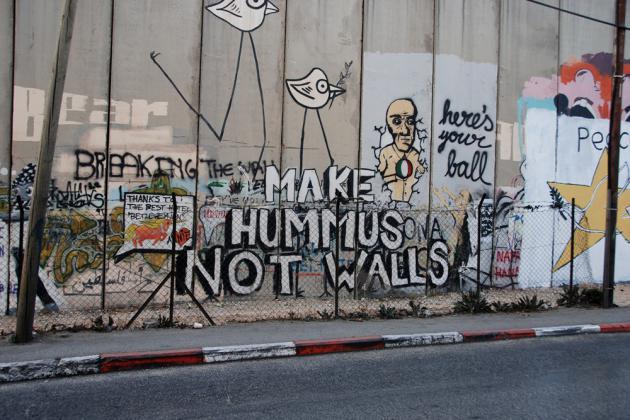 Pacifism Palestinian style: this work by an unknown Palestinian artist also embellishes the wall in Bethlehem. It makes a humorous reference to the slogan of the hippy and anti-Vietnam War movement of the 1960s: "Make love, not war." 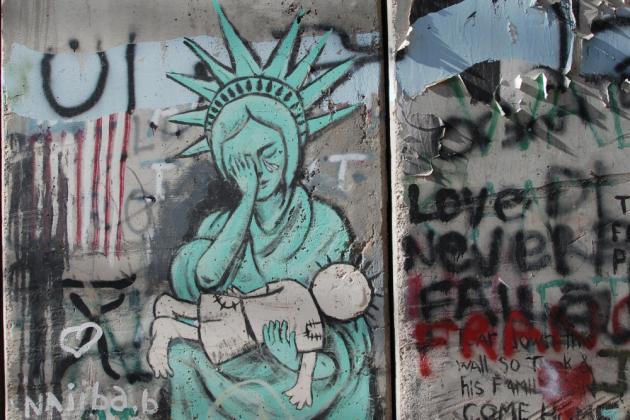 Mourning "Handala": an unknown Palestinian artist created the image of a mourning Statue of Liberty cradling "Handala" in its arms. In 1969, the Palestinian cartoonist Naji al-Ali created the autobiographical figure of the refugee boy "Handala," who always has his back turned to the observer and has his arms folded in a gesture of defiance. To this day, "Handala" serves as a symbol of Palestinian identity and resistance against the occupation. 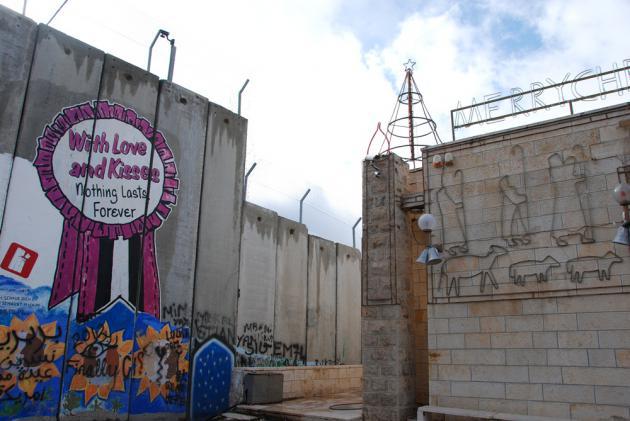 Christmas tourism vs art tourism: despite the many security warnings, Bethlehem remains a magnet for tourists. Especially during the Christmas season, the small city is overwhelmed by a flood of tourists and pilgrims. As the presumed birthplace of Jesus Christ, Bethlehem draws people from all over the world. Many, however, overlook the stark political realities of life in the city, e.g. the Israeli separation wall. 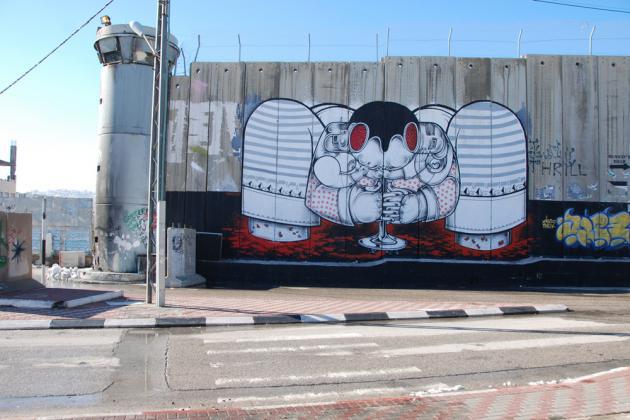 The New Yorker twins How & Nosm are known in the international street art world for their complicated and abstract graffiti works in red, black, and white. While engaged in their artwork in the autumn of 2013, they were frequently confronted and threatened by Israeli soldiers. One of their works, a symbolic image of a key, was painted over with "Stars of David" and pro-Israeli slogans by soldiers on the very day it was completed. 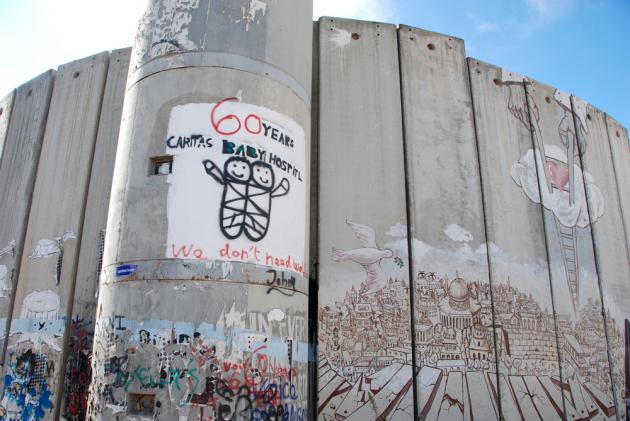 A special obligation: "We believe that just coming here and tagging, doing pieces, would be inappropriate and selfish. We felt an obligation to bring more than just our names so we brought some messages. If you're an artist you should take that into consideration," says the artistic duo How & Nosm. 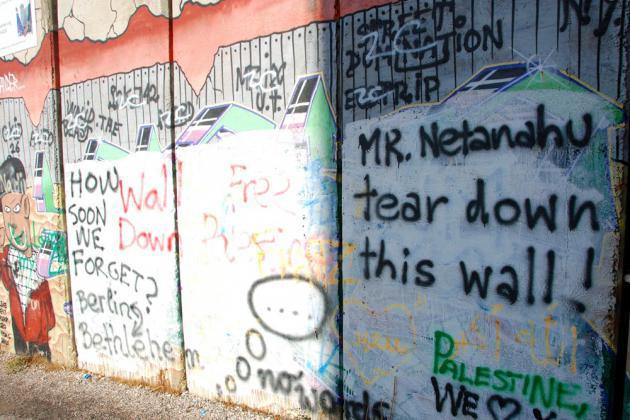 Berlin– Bethlehem: parallels are often drawn to another historically significant wall (and its fall). The citation "Ich bin ein Palästinenser" (I am a Palestinian) can be found on a number of places on the cement wall. Many sections of the Israeli separation barrier, as is the case here in Bethlehem, are quite similar in appearance to its former Berlin counterpart. 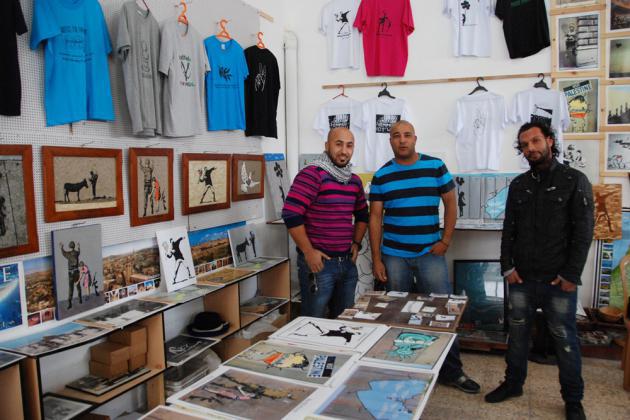 Yamen Elabed was the first Palestinian to come up with the idea of earning money from the graffiti on the barrier wall. Two years ago, he opened his "Banksy's Shop" in Bethlehem. The store features items such as postcards, bags, and T-shirts printed with the most famous motifs of the British artist (including those that no longer exist), as well as works of other artists. On request, tourists can even purchase cans of spray paint so that they too can immortalise themselves on the wall. 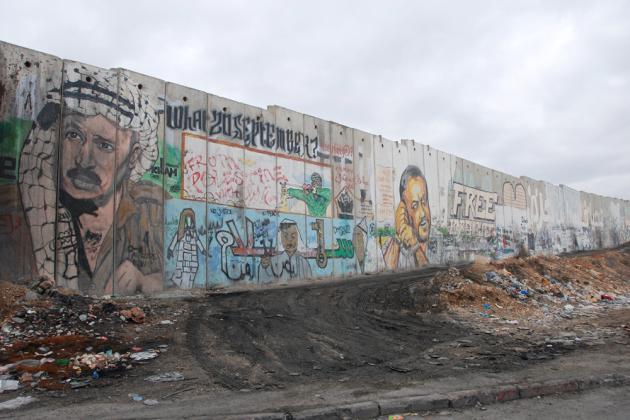 The wall at the Qalandiya Checkpoint between Jerusalem and Ramallah serves as a canvas for professional artists as well as politically active Palestinians and those that sympathise with their cause. Here, the likenesses of two of the most important and charismatic Palestinian figures adorn the cement wall: left, the revered former President Yasser Arafat, right, the Fatah politician Marwan Barghouti, who was sentenced to five terms of life imprisonment and has been in prison since 2002.

Gisha, an Israeli rights group, said the ban points "to the intensifying of access restrictions between the two parts of the Palestinian territory," calling it "a deepening of Israel's separation policy" for the West Bank and Gaza.

The Palestinians seek to set up a state in the West Bank and Gaza, territory Israel captured in the 1967 Middle East war. Israel in the past has defended its restrictions on Gazans travelling to the West Bank, saying many Palestinians from Gaza stay on illegally when granted short-term permits.

In Gaza, one Christian woman voiced hope Israel would reverse its policy so she could visit her family in the West Bank city of Ramallah.

"Every year I pray they will give me a permit so I can celebrate Christmas and see my family," Randa El-Amash, 50, said, adding: "It will be more joyful to celebrate in Bethlehem and in Jerusalem."

Christian leaders in Jerusalem condemned the move, but added that they are appealing to Israeli authorities to reverse the decision. "Other people around the world are allowed to travel to Bethlehem. We think Gaza's Christians should have that right, too," said Wadie Abu Nassar, an adviser to local church leaders.    (Reuters)

More on this topic
Christians in the Middle East: Between co-existence and suppressionInterreligious places of pilgrimage in Lebanon: Places of dialogue and common devotionSynod of Bishops for the Middle East: Arab Christians for church reforms
Home
Print
Newsletter
MoreAll Topics

END_OF_DOCUMENT_TOKEN_TO_BE_REPLACED
Social media
and networks
Subscribe to our
newsletter