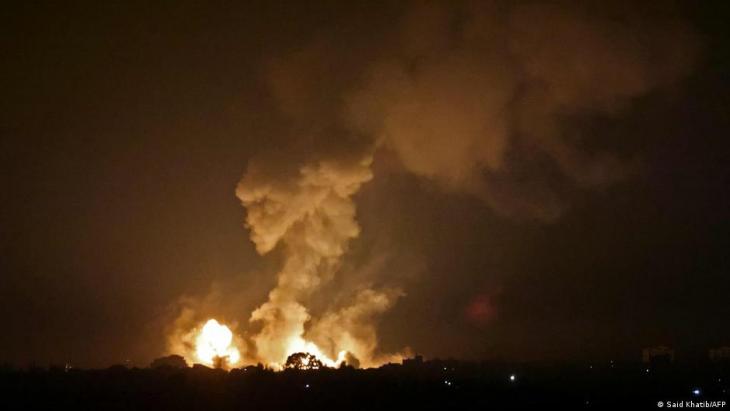 Israel carried out its first air strikes on the Gaza Strip in months early on Tuesday in response to a rocket fired from the Palestinian enclave as tensions soar after a weekend of violence around a Jerusalem holy site.

Warning sirens sounded in southern Israel Monday night after the rocket was fired from the enclave controlled by the Islamist group Hamas, the first such incident since early January.

The projectile crashed into the sea off Tel Aviv.

"One rocket was fired from the Gaza Strip into Israeli territory. The rocket was intercepted by the Iron Dome Air Defence System," the Israeli military said in a statement.

Hamas claimed to have used its "anti-aircraft defence" to counter the air raids, which caused no casualties, according to witnesses and security sources in Gaza.

No faction in the crowded enclave of 2.3 million inhabitants immediately claimed responsibility for the rocket but it comes after a series of attacks in Israel and a weekend of tensions at a holy site in Jerusalem.

Israel holds Hamas responsible for all rocket fire from Israel, and usually carries out air strikes in response. The incident, the first of its kind since January, comes after a weekend of Israeli-Palestinian violence in and around Jerusalem's flashpoint Al-Aqsa Mosque compound that wounded more than 170 people, mostly Palestinian demonstrators.

Diplomatic sources said the United Nations Security Council was to hold a session on Tuesday to discuss the spike in violence. Similar violence in Jerusalem around the same time last year triggered repeated Hamas rocket fire into Israel which escalated into an 11-day war.

The spike in tensions coincides with both the Muslim holy month of Ramadan and the Jewish festival of Passover.

The Al-Aqsa Mosque compound is known to Jews as Temple Mount – the holiest site in Judaism and the third-holiest in Islam.

Palestinians have been angered by repeated visits to the site by Jewish worshippers, who are permitted to enter but may not pray there.

The government of Naftali Bennett has repeatedly declared that Israeli security forces have a "free hand" to deal with demonstrators.

Hamas had warned on Sunday that "Al-Aqsa is ours and ours alone" and swore to defend Palestinians' right to pray there.

The exchanges of fire in Gaza and Al-Aqsa clashes came after a spike in violence including four deadly attacks since late March in the Jewish state by Palestinians and Israeli Arabs that claimed 14 lives, mostly civilians.

A total of 23 Palestinians have meanwhile been killed in the violence since March 22, including assailants who targeted Israelis, according to an AFP tally.

They include Hanan Khudur, an 18-year-old Palestinian woman who died Monday after being shot by Israeli forces last week in the village of Faquaa, near the flashpoint city of Jenin.

Israel had poured additional forces into the occupied West Bank and has been reinforcing its barrier in the territory.

State Department spokesman Ned Price said Monday that the United States was "deeply concerned" about the tensions and that senior US officials had been in touch by telephone with their counterparts from Israel, the Palestinian Authority and Arab nations.

"We have urged all sides to preserve the historic status quo" at the Al-Aqsa compound and avoid "provocative" steps, he said.

Jordan on Monday summoned the Israeli charge d'affaires "to deliver a message of protest over illegitimate and provocative Israeli violations at the blessed Al-Aqsa Mosque", its foreign ministry said in a statement.

Jordan serves as custodian of holy places in east Jerusalem, including the Old City, which Israel occupied in 1967 and later annexed in a move not recognised by most of the international community.

Bennett on Monday denounced what he called a "Hamas-led incitement campaign" and said Israel was doing "everything" to ensure people of all faiths could safely worship in Jerusalem.

"We expect everyone not to join the lies and certainly not to encourage violence against Jews," he said, in an apparent reference to Jordan.

Bennett is also facing a political crisis at home after his ideologically disparate coalition lost its one-seat majority in the 120-seat Knesset, Israel's parliament, just short of a year since he painstakingly cobbled a government together.

On Sunday, Raam, the first Arab-Israeli party ever to be part of an Israeli government, said it was "suspending" its membership over the violence in Jerusalem.    (AFP)

More on this topic
Arab party withdraws from Israeli government over Jerusalem violenceJoseph Croitoru's "Al-Aqsa oder Tempelberg": Zeroing in on the Middle East conflictPalestine and its Arabic neighbours: Gaza – a city no one wants
Home
Print
Newsletter
MoreAll Topics

END_OF_DOCUMENT_TOKEN_TO_BE_REPLACED
Social media
and networks
Subscribe to our
newsletter