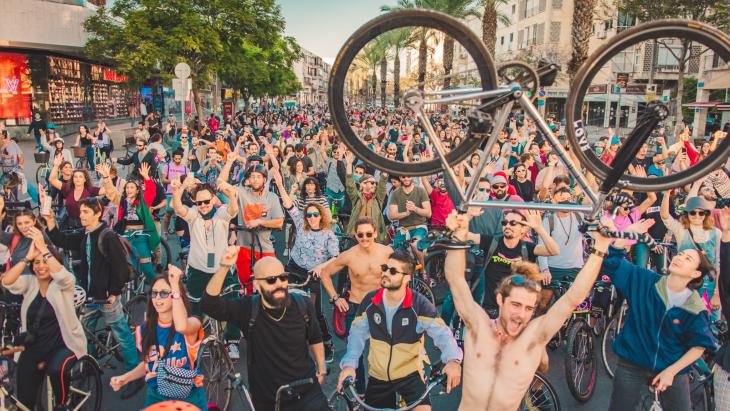 FIT TLV is the latest initiative by Tel Aviv’s youth to keep on partying during the coronavirus crisis. FIT describe themselves as "Free. Individuals. Together" – cycling, rollerblading and skating collectively every Friday in the Mediterranean metropole. By Djamilia Prange de Oliveira

"It’s not a protest, but it’s still political: young people that want to have fun. We need to see happy people," Gaya Cohen, one of the organisers of FIT TLV says. These days what began as a fairly sizeable rolling marathon has become a small festival, taking place in violation of coronavirus regulations. Around a thousand people attended the last gathering of the year in December, accompanied by blasting sounds from Tel Aviv’s party scene.

It all began as a vision for a collective marathon during the country’s second lockdown in September 2020 on RoshHaShana, the Jewish new year. While the Israeli authorities rushed to enforce another stay-at-home order in the face of rising COVID-19 case numbers, life in Tel Aviv once again became restricted, businesses which had survived the first lockdown went bankrupt, and social connections were reduced to a minimum.

With individual sports still being allowed, a loophole opened for many eager to meet outside, inducing hundreds of young Tel Avivians to take their dusty, never used surfboards to the beach, to bike, skate or start stretching – in clear view of the police.

An explosion of thirst

"People are thirsty to connect with each other, and this is the only way we can do it right now," Gaya tells me in a phone call. It started as a collective marathon, but as it grew, it became an explosion of thirst.

The more people came, the thirstier they were, and the marathon – the basic concept of which was to be together, but individually – rapidly crossed the line between the permitted and the forbidden, the responsible and the irresponsible, morally correct and morally incorrect behaviour during a pandemic.

Watching the videos on Instagram, I had mixed feelings, somewhere between fomo (fear of missing out) and fear – of the next wave, the next mutated virus strain, the next lockdown. Who wouldn’t like to party now? When I showed the videos to friends in Germany, they reacted with concern, judging, drawing parallels with the right-wing anti-coronavirus protests in Germany.

Two weeks after our phone call, Israel entered its third nationwide lockdown. Just two days after the last FIT of the year, which made headlines nationwide: "As if there was no corona: Crowds at a party in Hayarkon Park in Tel Aviv", the newsportal mako headlined.

"Basically, this is a protest in itself that shows that we need to see people’s faces, we need to see people smiling, we need to dance together. We are cycling for our souls!" says Gaya. FIT's "protest" seemed to resonate, receiving overwhelmingly positive feedback and continuing to grow, regardless, from week to week.

It is possible to write about the Holocaust and the crimes of colonial powers without downplaying anything. In her latest book, Charlotte Wiedemann focuses on the numerous blind ... END_OF_DOCUMENT_TOKEN_TO_BE_REPLACED

The Palestinian militant organisation Hamas, with Hezbollah's help, is building up a military presence in Lebanon, the ultimate consequences of which could be devastating, writes ... END_OF_DOCUMENT_TOKEN_TO_BE_REPLACED

With his fist bump greeting for a man he previously called a pariah, US President Biden has paved the way for Saudi Crown Prince Mohammed bin Salman's return to the international ... END_OF_DOCUMENT_TOKEN_TO_BE_REPLACED

Asked about the Shoah, Palestinians often bring up the Nakba, the displacement of Palestinians associated with the founding of the state of Israel. An Israeli Holocaust researcher ... END_OF_DOCUMENT_TOKEN_TO_BE_REPLACED

Foresight is needed to turn the tide of German policy. Being independent of Russia must not lead to dependence on authoritarian regimes in the Middle East. By Kristin Helberg END_OF_DOCUMENT_TOKEN_TO_BE_REPLACED

For many years, world-famous conductor Zubin Mehta has worked tirelessly to strengthen relations between Arabs and Jews, sponsoring projects such as "Road to Recovery", which is ... END_OF_DOCUMENT_TOKEN_TO_BE_REPLACED
Author:
Djamilia Prange de Oliveira
Date:
Mail:
Send via mail

END_OF_DOCUMENT_TOKEN_TO_BE_REPLACED
Social media
and networks
Subscribe to our
newsletter