From a German perspective, the current right-left division in Israel is opposite to that in Germany. Protests against the coronavirus regulations there are backed by right-wing parties such as the AfD and NPD, their participants labelled as right-wingers, conspiracy theorists and coronavirus deniers; in Israel, however, it is the liberal and left-wing opposition that is protesting against the government.

The participants of FIT are a segment of this opposition; secular, young and often self-employed. This segment has been hit hard by the crisis, and Gaya is one of them. Before COVID-19, she was working as a self-employed personal trainer and as a waitress in a restaurant. The restaurant is now closed and most of her groups have stopped training. "I feel stressed about money all the time. I have suffered a lot," she admits. The support she receives from the government barely covers her costs in the fifth most expensive city in the world.

After all, Gaya says, "we want this shit to be over, we don’t want to hear about masks and social distancing anymore." Looking forward to the next and last FIT of 2020, she was unconcerned about police enforcement at the event. When I asked her whether she worries that the police will shut the event down, which they did, she answers: "They will. But fuck the police."

Israelis have a "complicated" relationship with the police. During the pandemic, police brutality complaints have increased even more. Gaya comments sarcastically that "the corona time is the time to shine for the police, because everybody is their enemy."

In July, an Israeli was beaten up by police forces and jailed for four days for not wearing a face mask. Videos online showing police forces using water cannons to disperse protesters, yelling and using violence against unarmed civilians are going viral. The irregular enforcement of mask regulations has led to frustration and confrontations with the police.

While at the beach, masks are not being enforced, "at the Balfour protests, the police were booking people for not wearing masks," Gaya tells me. "I wear a mask inside – I just don’t think you need to wear it outside. Tell me to do something that I understand the rationale of, that I believe in, and I will do it."

Netanyahu pandering to his ultra-Orthodox base

Criticism towards police and government has also been voiced regarding selective police enforcement. The relationship between secular and ultra-orthodox Israelis is being strained still further as secular Israelis criticise the government for failing to enforce regulations on ultra-Orthodox communities, despite infection numbers in this segment of society being the highest. 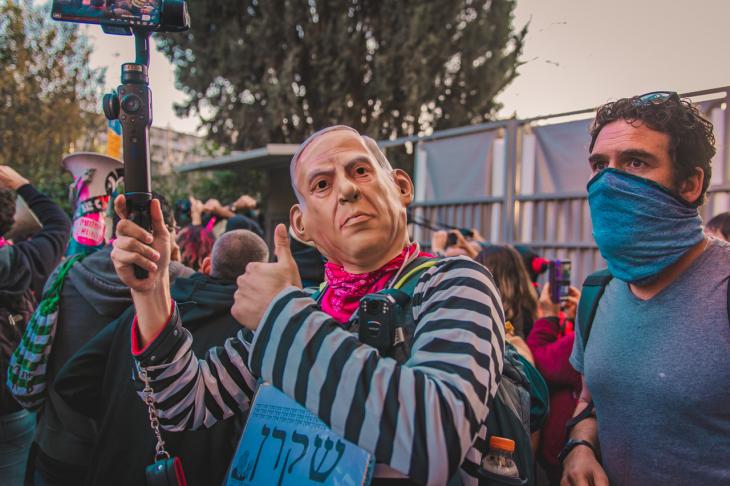 Balfour Street in Jerusalem: in recent months, protesters have gathered regularly to demonstrate outside Prime Minister Benjamin Netanyahu's official residence. Still facing serious allegations of corruption and having failed to protect jobs and businesses during the pandemic, Bibi could get an unpleasant surprise at the upcoming election

While the secular school system is closed, the ultra-orthodox school system remains open in violation of state regulations, mass gatherings and weddings continued to occur, as Amos Harel writes. The reason for this is also political. Harel is not the only one who argues that Prime Minister Benjamin Netanyahu "doesn’t dare to enforce the law on the ultra-Orthodox because without them, he has no political existence."

In September, a letter by the ultra-Orthodox mayors of the cities Bnei Brak, Beitar Illit and Elad to Netanyahu declared that "if their cities were put under lockdown, they would not co-operate with the government". Standing with one foot in prison, Netanyahu can only win the upcoming election in March with the support of the Orthodox parties and thereby continue evading the legal proceedings against him.

The management and political instrumentalisation of the coronavirus crisis has enraged the Israeli public, as it has meant "lockdown, personal monitoring and total suspension of individual freedom" for them (Sigal Sadetsky, Chief of Public Health Services, Ministry of Health, quoted in PHR Covid-19 Report, p. 15). Lack of transparency in the decision-making process has only increased popular distrust of the political elite.

It is possible to write about the Holocaust and the crimes of colonial powers without downplaying anything. In her latest book, Charlotte Wiedemann focuses on the numerous blind ... END_OF_DOCUMENT_TOKEN_TO_BE_REPLACED

The Palestinian militant organisation Hamas, with Hezbollah's help, is building up a military presence in Lebanon, the ultimate consequences of which could be devastating, writes ... END_OF_DOCUMENT_TOKEN_TO_BE_REPLACED

With his fist bump greeting for a man he previously called a pariah, US President Biden has paved the way for Saudi Crown Prince Mohammed bin Salman's return to the international ... END_OF_DOCUMENT_TOKEN_TO_BE_REPLACED

Asked about the Shoah, Palestinians often bring up the Nakba, the displacement of Palestinians associated with the founding of the state of Israel. An Israeli Holocaust researcher ... END_OF_DOCUMENT_TOKEN_TO_BE_REPLACED

Foresight is needed to turn the tide of German policy. Being independent of Russia must not lead to dependence on authoritarian regimes in the Middle East. By Kristin Helberg END_OF_DOCUMENT_TOKEN_TO_BE_REPLACED

For many years, world-famous conductor Zubin Mehta has worked tirelessly to strengthen relations between Arabs and Jews, sponsoring projects such as "Road to Recovery", which is ... END_OF_DOCUMENT_TOKEN_TO_BE_REPLACED
Author:
Djamilia Prange de Oliveira
Date:
Mail:
Send via mail

END_OF_DOCUMENT_TOKEN_TO_BE_REPLACED
Social media
and networks
Subscribe to our
newsletter