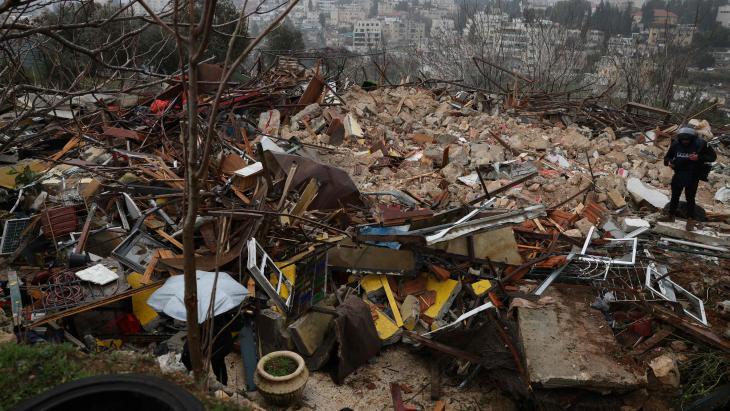 Israeli police destroyed the home of a Palestinian family in the sensitive east Jerusalem neighbourhood of Sheikh Jarrah early on Wednesday, an AFP photographer reported.

The looming eviction of other families from Sheikh Jarrah in May last year fuelled an 11-day war between Israel and armed Palestinian factions in Gaza.

Before dawn, Israeli officers went to the home of the Salhiya family, threatened with eviction since 2017 and the centre of an anti-eviction campaign in the Palestinian territories and further afield, according to a video posted online by the police.

Shortly afterwards, an AFP photographer witnessed the demolition of the house.

"Israel police completed the execution of an eviction order of illegal buildings built on grounds designated for a school for children with special needs from east Jerusalem," a police statement said. It stated "members of the family living in the illegal buildings were given countless opportunities to hand over the land with consent".

A police spokesman confirmed that 18 family members and supporters were arrested during the operation for "violating a court order, violent fortification and disturbing public order," but no clashes took place during the incident.

The Salhiya family has been facing the threat of eviction from their home in the Sheikh Jarrah neighbourhood of Israeli-annexed east Jerusalem since 2017, when the land where their home sits was allocated for school construction.

When police arrived to carry out the eviction order on Monday, Salhiya family members went up to the building's roof with gas canisters, threatening to set the contents and themselves alight if they were forced out of their home.

A delegation of European diplomats also visited the site. Sven Kuehn von Burgsdorff, head of the European Union's mission to the West Bank and Gaza Strip, told journalists on Monday that "in occupied territory, evictions are a violation of international humanitarian law".

Police had eventually backed off.

Jerusalem deputy mayor Fleur Hassan-Nahoum said on Tuesday the plot that the Salhiya family claim as theirs belonged to private Palestinian owners who then sold it to the city, which allocated it for classrooms for special needs Palestinian children.

She said she was "particularly disappointed" by European diplomats "showing up for something that was a municipal issue, a building and planning issue, and talking about international law breaches."

Hundreds of Palestinians face eviction from homes in Sheikh Jarrah and other east Jerusalem neighbourhoods. Circumstances surrounding the eviction threats vary. In some cases, Jewish Israelis have lodged legal claims to plots they say were illegally taken during the war that accompanied Israel's creation in 1948.

Palestinians say their homes were legally purchased from Jordanian authorities who controlled east Jerusalem between 1948 and 1967. Israel captured east Jerusalem in the Six-Day War of 1967 and later annexed it in a move not recognised by the international community.

More than 200,000 Jewish settlers have since moved into the city's eastern sector, fuelling tensions with Palestinians, who claim it as the capital of their future state.     (AFP)

END_OF_DOCUMENT_TOKEN_TO_BE_REPLACED
Social media
and networks
Subscribe to our
newsletter