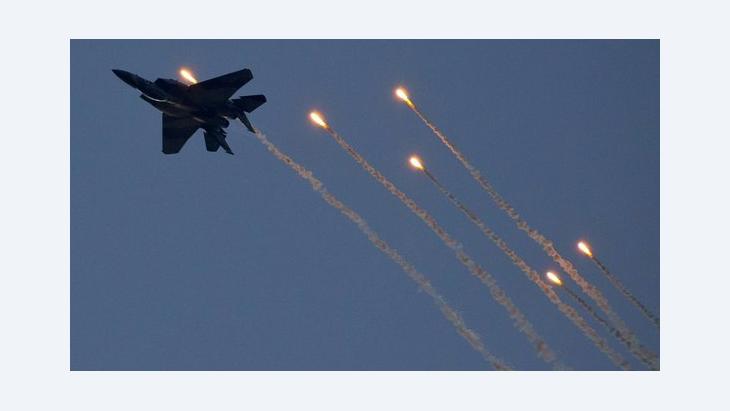 The latest Israeli air bombardments of military facilities near Damascus throw a spotlight on the Israeli-Iranian conflict in the region, and apparent Israeli plans to fight Iran and Hezbollah on Syrian territory. Analysis by Stefan Buchen

﻿The booms could be heard near Damascus twice in the space of 48 hours. Eyewitnesses report that the second series of explosions in the early hours of Sunday was louder and more ferocious than anything they had experienced so far since the start of the war in Syria. There is still some doubt as to the actual physical targets and the strategic aims of the air attacks.

But in consideration of statements by western intelligence sources, Israeli military experts and parties involved in the Syrian conflict, no one is now contesting the fact that Israel has carried out two military strikes on Syrian territory.

The New York Times and other media are wondering if Israel is now planning to intervene in the Syrian conflict. Syria's Deputy Defence Minister is trying to steer international interpretation in exactly this direction when he denounces the attacks, talks of an "Israeli declaration of war" and maintains that Israel is supporting the Islamist rebels against the Assad government. 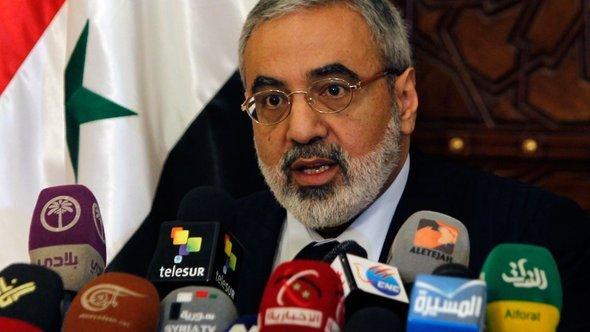 Ominous statements from Damascus: Speaking after a special session of the Syrian cabinet, Information Minister Omran Zoabi said the Israeli air attack opened a "door to all possibilities

Does Israel want to intervene in the war between the Syrian regime and the armed, Sunni-dominated opposition? There is cause for considerable doubt over such a claim - and that is despite the fact that Syria's warring factions regularly accuse each other of making common cause with Israel. As the smoke clears after the bombardments, the real reasons for the destructive air attacks become more apparent.

Israel's regional-strategic agenda is not determined by the war in Syria, but by its own confrontation with Iran. For years now, an undeclared war has been smouldering between Israel and the Islamic Republic, a conflict that mostly takes place behind the scenes, and only occasionally flares up and reveals itself to everyone, as it did at the weekend near Damascus. The individual flare-ups are both temporally sporadic and geographically scattered, making it difficult for the public to assign them to an overall scheme.

It would appear that the Israeli military hit weapons transports and/or stores. It can be presumed that the weapons originate from Iran and that they were being temporarily stored on Syrian territory destined for the Shiite Hezbollah militia in Lebanon. If reports that the weapons in question were mid-range Fateh 110 missiles with a range of up to 300 kilometres are accurate, then it would make little sense to deploy such rockets in the Syrian war.

Hezbollah leader Hasan Nasrallah may have conceded that his militia is fighting in Syria on the side of the Assad regime. But Fateh missiles are not suited to village-to-village or street-to-street fighting. These rockets are used as a deterrent, and in the case of an escalation as a way of retaliating against Israel. From South Lebanon, the missiles can reach Tel Aviv.

As long as the Assad regime was unchallenged and stable, Hezbollah stored part of its arsenal of missiles on Syrian territory. The Shiite militia believed its weapons were safer with its ally than in Lebanon, where they could more easily be traced and seized or destroyed by rival militias, UN inspectors or the Israelis. But since the start of the armed rebellion against the Assad regime almost two years ago, Hezbollah and its Iranian sponsor hold a different view.

They fear that while it is in Syria, the missile arsenal could fall into the hands of Sunni rebels. This is why back in the summer of 2011, Hezbollah began relocating parts of this strategic arms reserve to Lebanon.

The primary context of the Israeli-Iranian confrontation has been unfolding since the 1979 Iranian Revolution. Since that year, Israel has perceived itself to be under threat from the Islamic Republic. 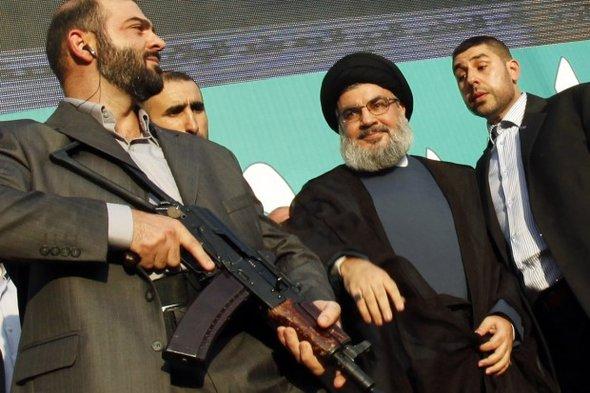 A thorn in Israel's eye: "While Khomeini's 80s promise that his troops would not only conquer Karbala in Iraq but also march on Jerusalem could still be dismissed as florid Shiite fighting talk, the foundation of Hezbollah in Lebanon represented a definite military confrontation"

While Khomeini's 80s promise that his troops would not only conquer Karbala in Iraq but also march on Jerusalem could still be dismissed as florid Shiite fighting talk, the foundation of Hezbollah in Lebanon with Iranian help and its war of attrition against occupying Israeli troops in Lebanon represented a definite military confrontation. Israel has referred since then to the "Tehran-Damascus-Hezbollah axis".

In addition to this since the mid-1990s came Iranian support for the Palestinian group Hamas and the Iranian nuclear programme, which Israel believes is primarily focused on developing a nuclear bomb to end Israel's nuclear arms monopoly in the Middle East and creating a balance of fear in the region. Israeli Prime Minister Netanyahu has repeatedly threatened to scotch Iran's nuclear programme by military means if necessary.

Iran's rulers say they are leading the historic confrontation with Israel as imperialist foreign body in the region more effectively than any other Islamic nation. With this claim, they create trans-national political prestige and a sense of mission as a regional power. ﻿For the Iranian regime this is also a way of putting the Sunni Gulf monarchies in the shade.

Failed attempts to create a "New Middle East" on the foundations of an Israeli-Palestinian peace were always regarded by Iranian revolutionary leader Khamenei as an evil plan to marginalise the Islamic Republic within the power structures of the Middle East. This is why he always fought bitterly against the peace process while tenaciously consolidating Iran's alliance with the Damascus regime and Hezbollah.

Iran's arming of Hezbollah is just as much an act in this shadowy war as Israeli attempts to stop the transports. Israel's air bombardments at the weekend follow the same logic as the attacks against a desert convey in Sudan in early 2009 taking Iranian weapons to Hamas via Egypt. 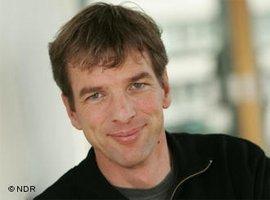 ​​Israel's strategy is also flaring up in other ways: in the form of cyber attacks using computer viruses that paralyse Iranian nuclear facilities, or assassination attempts on Iranian nuclear scientists. And Iran is hitting back, from a concealed position but in a recognisable hand. For example, few would contest that Hezbollah was responsible for the fatal attack on Israeli tourists last July in the Bulgarian city of Burgas. It is therefore likely that Iran ordered the bombing.

While Israel consolidates its strategic alliance with Azerbaijan, Iran is courting the favour of the new, post-revolutionary leadership in Egypt. At some point, this undeclared clandestine war could lead to an open conflict between Israel and Iran.

The rebellion in Syria against the Assad regime is now being overlapped by two regional conflicts. Iran is playing a key role in both of these. For the time being, the Syrian conflict is being fought along confessional lines – Syria has become the new battlefield of Sunni-Shiite antagonism, with enemies Iran and Saudi Arabia pulling the strings. And since the latest Israeli air attacks, Israel is conducting its confrontation with Iran on Syrian territory.

Any reconciliation between Turkey and Syria’s Assad regime would have disastrous consequences for many Syrians, explains Syria expert Kristin Helberg END_OF_DOCUMENT_TOKEN_TO_BE_REPLACED

There are signs of an imminent normalisation of relations between Turkey and Syria. This would allow Erdogan to score political points domestically before the upcoming elections ... END_OF_DOCUMENT_TOKEN_TO_BE_REPLACED

As Syrian camps housing families of Islamic State fighters get more dangerous, there are calls to bring children out, even if the mothers don't want to go. The idea of separating ... END_OF_DOCUMENT_TOKEN_TO_BE_REPLACED

Where are the measures to deal with the looming challenges facing the Arab world? In this commentary, Marwan Muasher warns that the region is in grave danger of falling behind ... END_OF_DOCUMENT_TOKEN_TO_BE_REPLACED

At the end of every year, the team at Qantara.de gives you a run-down of the ten most-read articles on the site over the past 12 months. Here is a quick overview of the stories ... END_OF_DOCUMENT_TOKEN_TO_BE_REPLACED

Social engagement is often motivated by religious factors. A new book explores the background to these community efforts and appraises how effective they are in helping to ... END_OF_DOCUMENT_TOKEN_TO_BE_REPLACED
Author:
Stefan Buchen
Date:
Mail:
Send via mail

END_OF_DOCUMENT_TOKEN_TO_BE_REPLACED
Social media
and networks
Subscribe to our
newsletter