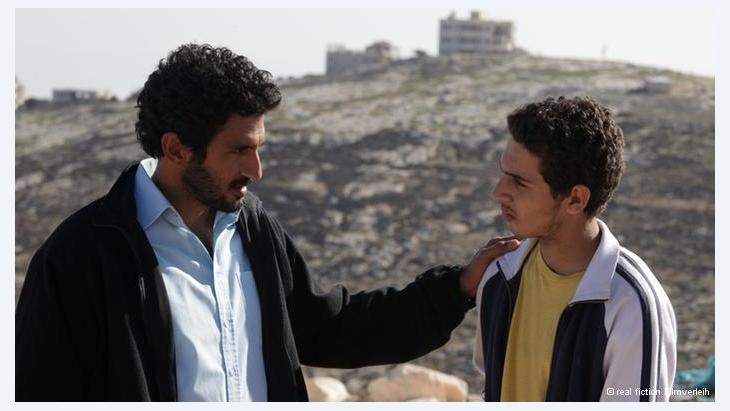 The friendship between an Israeli intelligence officer and his Palestinian informant makes for an explosive subject. Film director Yuval Adler takes up the theme in his gripping thriller "Bethlehem". Annabelle Steffes watched the film

Sanfur, a young Palestinian boy, had only just turned 15 when he was recruited as an informant by Razi, an Israeli intelligence officer many years his senior. It was no coincidence that Sanfur was chosen, his brother being a fugitive Palestinian underground fighter, who Razi is supposed to track down and kill. Over the course of more than two years, a close friendship develops between Sanfur and Razi.

Sanfur, who has stood in the shadow of his older brother all his life, finds a father figure in Razi. For his part, the intelligence officer returns Sanfur's affection, while at the same time exploiting the youth to his own ends. The boy desperately attempts to meet the demands of the agent and at the same time remain loyal to his brother. The boundaries become increasingly blurred for Razi as well. In the end, both have to make a decision that will change their lives forever.

"Bethlehem" springs back and forth between the different perspectives. The camera follows the field of vision of the main characters, thereby contributing to the film's sense of authenticity.

From the very beginning, it was clear to Israeli director Yuval Adler that he could only write the script for such a film together with a Palestinian. "I wanted to show that this kind of co-operation is possible." This is why he brought the Arab journalist Ali Waked on board for the project. 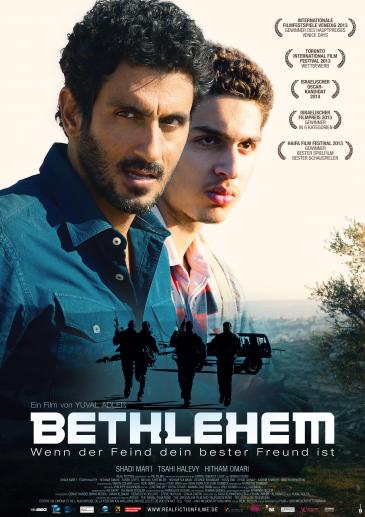 "A brutally honest film with an almost documentary-like edge": in the film "Bethlehem", Yuval Adler and Ali Waked show how the Israeli secret service recruits its informants and keeps a firm grip on them for years

Adler and Waked come from very different worlds. Adler is an Israeli Jew who served with the military intelligence service. Waked is a Muslim and has worked for many years as a journalist and activist in Ramallah and Gaza.

When conducting research for the film, Adler and Waked interviewed, among others, members of the al-Aqsa Brigade and Hamas. "It was delicate, but not dangerous, to get them to disclose something about themselves," they say. It was much more difficult, however, to get a hold of information on the methods used by Shin Beth, the Israeli intelligence service.

"Most of this information came from former agents," explains Waked. "Those currently working in the intelligence service are rarely prepared to talk." For this reason, it took over four years to finish the research for "Bethlehem". The result is a brutally honest film with an almost documentary-like edge. Adler and Waked show how those in the intelligence service recruit informants and maintain their allegiance for years on end. They do not employ violence or extortion; the trick is to establish a real and close relationship. In the process, the agents themselves – especially the "good" ones – find that the dividing lines become blurred.

Neither right nor wrong

"Bethlehem" tells a tale of mutual seduction and dependence, of hate, love and disappointment. The film doesn't give the audience a chance to like its torn, yet charismatic characters. At the same time, it is also impossible to hate them.

It is this duality of feelings, the inability to differentiate between good and evil, which Waked and Adler wanted to portray through the protagonists Sanfur and Razi. "We didn't want to infuse the film with any symbolism. There is no right or wrong, only overheated, real feelings," stresses Yuval Adler. At the end of the film, viewers are left perplexed and abandoned – and this is exactly what the two screenwriters wanted. There can be no pre-packaged solution; this is not the task of the film director, explains Adler.

A glimpse into the future

Nonetheless, both filmmakers stress that they look with hope to the future and believe in an end to the Middle East conflict. "Our film, in particular, shows that we must end this tense situation," says Yuval Adler. In Israel itself, "Bethlehem" was the most-viewed Israeli film of 2013. Yuval's and Waked's work has won numerous prizes, including the Golden Lion at the 2013 Venice Film Festival.

In spite of all this, "Bethlehem" is still not permitted to be shown in the Palestinian territories. Although many of the actors are Palestinian, it is unbelievably difficult to organise official screenings of Israeli films, explains Waked. This is especially the case when films are financed with Israeli money.

This is unfortunate, especially as the story of "Bethlehem" is set both Palestinian and Israeli society. The ever-present visual element that links everything is the landscape. Although they live in completely different realities, all of the film's characters are nonetheless neighbours in this bitterly fought over Biblical land.

Yazan Khalili is spokesman for The Question of Funding, a collective of artists taking part in the leading German contemporary art festival Documenta 15. Here, he responds to ... END_OF_DOCUMENT_TOKEN_TO_BE_REPLACED

When times are tough, the exchange of ideas and perspectives becomes especially important. It takes dialogue. And at Deutsche Welle, we need distributors and cooperative partners ... END_OF_DOCUMENT_TOKEN_TO_BE_REPLACED

Every week, Jewish, Christian and Muslim youths meet to sing together. And they do so in the middle of a city where Israelis and Palestinians are often at loggerheads. Anja Koch ... END_OF_DOCUMENT_TOKEN_TO_BE_REPLACED

A law has been passed by the Iraqi parliament that criminalises any contact with Israel. In the midst of heated debates on the subject, one crucial aspect has been forgotten: the ... END_OF_DOCUMENT_TOKEN_TO_BE_REPLACED

Analyst Iyad El-Baghdadi examines the ongoing tensions between the United States and the two Gulf states – Saudi Arabia and the UAE – and their geopolitical implications in ... END_OF_DOCUMENT_TOKEN_TO_BE_REPLACED

What do we mean when we talk about Palestinian literature: an exploration using the example of Adania Shibli’s slender novel "Minor Detail". By Miryam Schellbach END_OF_DOCUMENT_TOKEN_TO_BE_REPLACED
Author:
Annabelle Steffes
Date:
Mail:
Send via mail

END_OF_DOCUMENT_TOKEN_TO_BE_REPLACED
Social media
and networks
Subscribe to our
newsletter