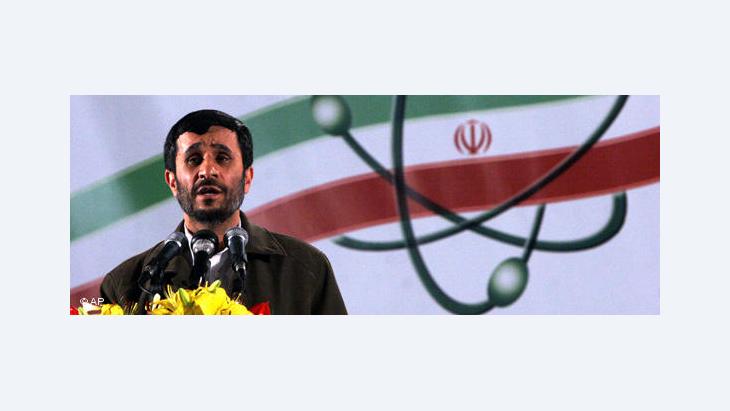 Since the publication of the latest IAEA report, which indicates more clearly than ever Iran's intention to build nuclear weapons, the sabre-rattling in Tehran and Jerusalem has got louder. Threatening gestures on both sides are nothing new, but the fact that they are also the product of internal turf wars in both camps is often overlooked. Joseph Croitoru sheds some light on the matter

On the Israeli side, there is a growing sense of powerlessness in the face of the increasing threat and the ineffectiveness of the sanctions policy pursued by the West.

Right-wing Israeli politicians have been seeking to capitalize on this for quite some time. When Benjamin Netanyahu – at the time the leader of the opposition – called Ahmadinejad a "modern Hitler" because of his voiced intentions to destroy Israel, his opposite number Prime Minister Ehud Olmert followed up just two weeks later with the comment that "Iran's President talks like Adolf Hitler".

Significantly, both politicians made these statements to a foreign audience: Netanyahu to George W. Bush's security adviser, Olmert in an interview with the German newspaper Bild. Since becoming head of state, Netanyahu has extended his Hitler comparison to include the revolutionary leader Khamenei, expressing this publicly while on a visit to Moscow in March 2011. 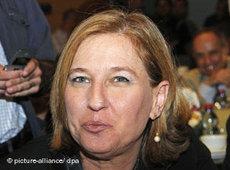 Critical of Israeli Prime Minister Netanyahu's stance on Iran: Tzipi Livni says that "the role of leadership is to give an answer to this kind of threat," rather than to worry people

​​With this demagogical alarmism, which asserts that a nuclear Iran is automatically a danger to world peace, Netanyahu and his camp aim to lever the question of Iran onto the international community's agenda. At the same time, they are using the threat of unilateral military action as a means of exerting pressure.

This is an effective strategy, and Israeli politicians deploy it as a way of improving their image. However, when they change office, they also change their rhetoric. In 2008, as foreign minister, Tzipi Livni insisted that the option of a military strike on Iran must remain open.

As leader of the opposition, however, she rebukes Netanyahu and his defence minister, Ehud Barak, for their "talk" about Israel's option of taking military action against Iran. In so doing she is also, incidentally, positioning herself in relation to her rival Shelly Yachimovich of the Labour party, who is currently gaining strength. Yachimovich has warned Netanyahu and Barak against a "megalomaniac adventure" in Iran.

The former head of Mossad, Meir Dagan, now a businessman, has weighed in with similar remarks. As early as last May he denounced the suggestion of a military attack on Iran as a "stupid idea", as it would not only spark a regional war but would also be followed by countless rocket attacks from Hezbollah in Lebanon and from Syria, an Iranian ally.

This declaration of scepticism was welcomed in Tehran; in Jerusalem, however, it is still causing outrage. Netanyahu and Barak accuse Dagan of having damaged Israel's deterrent capability, and since making these comments he has been threatened with sanctions several times. His application to renew his diplomatic passport was rejected; otherwise, however, he has not been touched. As a result he is celebrated in the government-critical media almost as a hero.

The investigative TV magazine programme "Fact" on Israel's Channel Two broadcast an extended portrait of Dagan in which he restated his position. Just eleven months after leaving office, he is one of the most popular men in the country. The criticism to which he was subjected during the fracas surrounding the assassination in Dubai in January 2010 of Mahmoud al-Mabhouh – who is believed to have been the head arms dealer of Hamas – seems to have been forgotten.

Since that edition of "Fact", Dagan has also become known as a prolific amateur painter. The newspaper Haaretz is not the only one to suspect that his recent public appearances mark the first steps towards a political career; however, regulations decree that he may not officially enter politics until 2013. 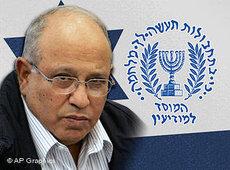 Loved and loathed: Meir Dagan, the former head of Mossad, has denounced the suggestion of a military attack on Iran as a "stupid idea"; for these remarks he has been severely criticised by the government, but feted by government-critical media

​​The Israeli debate is no secret in Tehran. In the escalating power struggle between President Ahmadinejad and the religious conservatives around Khamenei, their respective positions with regard to the Israelis' comments play an important role. The president's camp is on the defensive. It is losing popularity with the people, and hopes to win it back with its threats against Jerusalem.

This explains why Ahmadinejad's defence minister Ahmad Vahidi announced last week – as if hoping to add further credence to the fears voiced by Meir Dagan – that in the event of a military strike against Iran, Jerusalem should anticipate a counterattack of 150,000 rockets.

These strident tones are not merely in reaction to Israel; they are also the product of an internal Iranian dynamic of escalation that has been going on for some time. In April 2010, during a visit by Ahmadinejad to the north-east of the country, Vahidi warned the "Zionist regime" against an attack, saying that if this were to happen, Israel would be erased without a trace.

Significantly, the previous day, one of Ahmadinejad's opponents, Mojtaba Zolnoor, Khamenei's representative with the Revolutionary Guard, had also threatened Israel, saying that if so much as a single rocket fell on Iran, countless Iranian rockets would strike the very heart of Tel Aviv before the dust had settled.

Alongside such evocations of Iran's supposed strike capability – immediately disseminated throughout the world by the Israeli media – another element of the strategy of the rival Iranian camps is persistently to downplay the enemy's strength. This is a constant balancing act. If the propaganda were to go too far, Iranians would be forced to ask themselves why they should fear Israel and the United States at all. Threatening gestures by the Iranian military and politicians, which often come across as very staged, could thus lose their impact. This fact is not lost on their opponents in Khamenei's inner circle. 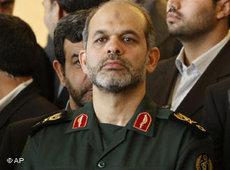 Iran's Defence Minister Ahmad Vahidi has warned Israel not to attack the Islamic Republic, saying that if this were to happen, Israel would be erased without a trace

​​Evidence of this is currently to be found on Khamenei's official Persian language webpage, in an article by Amir Mohebbian, a well-known commentator regarded as belonging to the orthodox camp. The article is entitled "Possible Scenarios Posing a Threat to Iran", and its detailed and sober analysis takes the wind out of the sails of the country's warmongers, because none of the three scenarios he envisages for the near future considers a military strike on Iran as a realistic possibility.

Mohebbian writes that air strikes combined with an invasion by ground troops would be difficult for a Western coalition to coordinate, and that they would also have to reckon with a massive reaction from Russia and China. The size of the country would mean a long-term occupation would scarcely be possible, especially as Western military intelligence is poorly informed about Iran.

Even limited action against the regime's centres of power would be doomed to failure, he writes, because Iran is particularly well armed against such a threat. The results of an intervention of this kind for the attackers could not be foreseen, in any case, because they also have a contrary effect: they could give rise to greater popular support for the regime.

Finally, Mohebbian also rejects the third scenario, which posits targeted attacks on selected Iranian installations including, for example, the Bushehr nuclear plant. He points out that if the plant were to be bombed, the entire region would be affected, a fact that can surely only act as a deterrent. Mohebbian dismisses the fact that the West is making noises about the possibility of a military strike, despite the unlikelihood of the scenario, as pure psychological warfare, the main aim of which is to sow discord among the Iranians themselves.

For this reason, he advises that the best course is simply to ignore belligerent Western rhetoric, believing that this course of action would demonstrate even more strongly how ineffectual such rhetoric is. In saying so, he is sending an unequivocal message to President Ahmadinejad and his circle.

The Middle East is plagued by electronic armies working at the behest of one regime or another. Long used by those in power as a weapon in the fight against activists and ... END_OF_DOCUMENT_TOKEN_TO_BE_REPLACED

On Friday, Iranians head to the polls to elect a new president. What's at stake in this presidential election? Sanam Shantyaei explains. END_OF_DOCUMENT_TOKEN_TO_BE_REPLACED

For centuries, the great classical Persian author Hafez has inspired German writers. Translations, adaptions and homages have been created in his wake, and the process continues ... END_OF_DOCUMENT_TOKEN_TO_BE_REPLACED

In the run up to Iran’s presidential election, Supreme Leader Ayatollah Ali Khamenei has sought to entrench his power. Alex Vatanka asks whether a sharp slump in voter turnout ... END_OF_DOCUMENT_TOKEN_TO_BE_REPLACED

Turkey's parliamentary and presidential elections are scheduled for June 2023. But they are already casting a shadow. While the opposition is calling for early elections, ... END_OF_DOCUMENT_TOKEN_TO_BE_REPLACED
Author:
Joseph Croitoru
Date:
Mail:
Send via mail

END_OF_DOCUMENT_TOKEN_TO_BE_REPLACED
Social media
and networks
Subscribe to our
newsletter