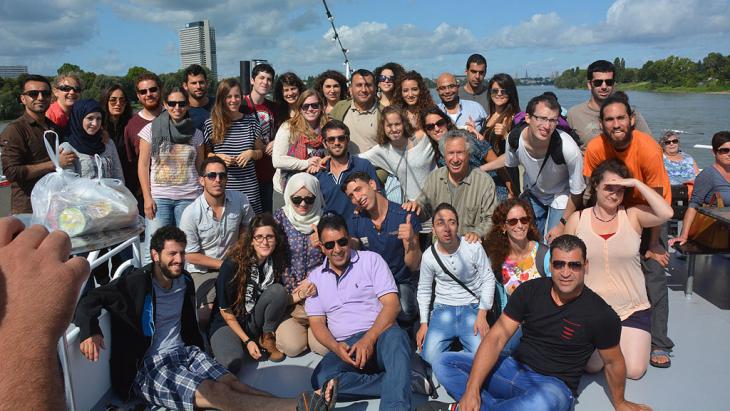 Israeli–Palestinian dialogue in Germany
It is possible to work together

While bombs are being dropped and rockets fired back home, a group of young Israelis and Palestinians has come to Germany to talk to each other and to listen to the other side of the story. By Wolfgang Dick

A group of about 50 Israelis and Palestinians aged between 20 and 35 fill the room in a conference centre near Bonn. To begin with, things are very difficult. There are tears and arguments, accusations and reproaches. Sitting together seems unbearable, almost impossible.

Yet when those participating in the two-week event start to talk about the fates of their families, the anonymous groups turn into real people; the differences between them begin to fade away. The participants communicate in Arabic and Hebrew. Interpreters are on hand to help express the intensity of their experiences and feelings.

"You hear terrible stories, and it's really touching when other people empathise with you," says Suad, a 35-year-old Palestinian woman. Sitting across from her is Amit, a 33-year-old Israeli who increasingly realises how little the two sides know about each other. "I don't trust our media. They are too much a part of the conflict," says Amit. Like others here, she wants to form her own, comprehensive picture of the situation, to have the chance to speak directly to those from the "other side".

Back home, Amit and Suad only live 20 minutes away from each other. In reality, however, they are worlds apart. Amit lives in Jerusalem; Suad lives in the Palestinian territories and needs a special permit to cross the border. Now they and others like them have come together in Germany. 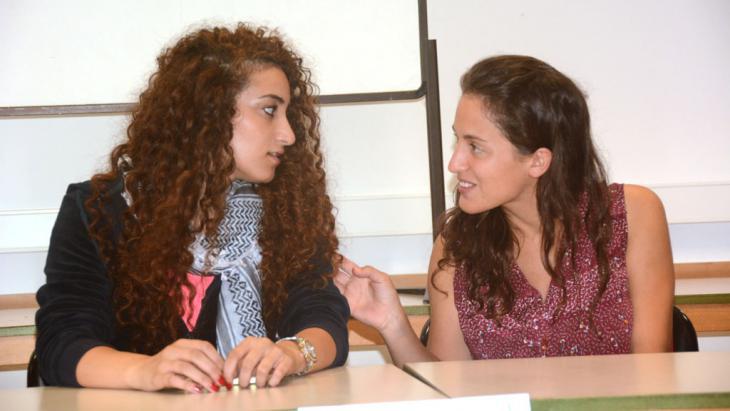 Dialogue in a time of war: the German private initiative known as the Committee for Basic Rights and Democracy (KfGD) brings young Palestinians and Israelis together far away from the conflict zone to give them the opportunity to put their prejudices to one side and listen to each other

The event is organised by the KfGD, the Committee for Basic Rights and Democracy, a group run by peace activists and funded exclusively by private donations. During the bloody conflict in the former Yugoslavia, the committee made it possible for children from the war zone to spend two weeks at the seaside to give them a break from the fighting.

Since 2002, they have been facilitating meetings between young Palestinians and Israelis far from the scene of the conflict. Their idea is to offer participants the opportunity to forget their prejudices and learn that people on both sides share the same basic dreams and feelings. The association covers all costs, but relies on partner organisations such as "Breaking Borders" to use word of mouth to find potential participants in the conflict region.

All told, some 2,000 young adults, including many students, have so far travelled to Germany to meet others like them and share their stories. Against the backdrop of the current Gaza conflict, many of those in Germany told their relatives and friends back home that they were going to a holiday camp. For many, the truth is simply too sensitive.

Barbara Esser, one of the organisers of the "Holiday from War" project, understands the reasons for these white lies. "It is not acceptable where they come from," she says. "Anyone who attempts to make contact with the other side is deemed a traitor." She recalls one Israeli who wanted to be friends with a Palestinian on Facebook but didn't know if he could without upsetting his friends.

At the heart of the programme is a mutual willingness to listen. Esser says it is not about forcing people to make friends, but fostering understanding and tolerance. They use role play to stage peace negotiations and come up with suggestions for solutions to the Middle East conflict.

Those involved feel that it is important to take many small steps instead of trying to come up with one major plan. Amit describes the experience as a chance to dream. "Positive visions of the future help generate hope and belief in the goal." Very few of the participants believe the conflict will be solved by a younger generation. 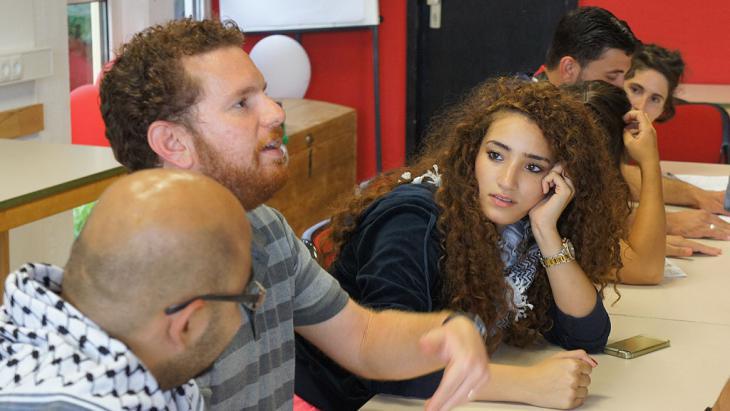 Fear at the root of all difficulties

During their negotiations, the young Israelis and Palestinians pinpoint the basic hurdle to progress, namely the fear of having to make too many concessions and ultimately ending up the loser. There is a broad base of agreement on the importance of overcoming that feeling.

Suad is positive about the work they are doing together and sees how it can break down barriers. "Even the right-wing conservatives on both sides have started to change their thinking," she says, adding that it helped to ask yourself what the other side would expect instead of just repeating what you yourself want. Whenever things get particularly tense, and those in charge show participants how they are slipping back into old thought patterns, both Israelis and Palestinians are surprised.

Ultimately the ice breaks whenever there is a chance for the participants to get to know each other better. Apart from playing games and going on trips, there are designated evenings devoted to the presentation of the different cultures. After cooking and eating together, there is often music, and then the unthinkable happens: Israelis and Palestinians dance together. No photos are taken for fear that they could be misunderstood.

There is a meeting of the ways here, and although participants agree that they did not have a holiday from war, they did lay the groundwork for being able to talk when they return home about the most important thing they learned, namely that it is possible to work together.

We are in favour of human rights. But One Love armbands are self-righteous and ignore some fundamental issues. Stefan Buchen examines the debate surrounding the World Cup in Qatar END_OF_DOCUMENT_TOKEN_TO_BE_REPLACED

Education for girls and women is still possible in Afghanistan, says Reinhard Eroes of the Kinderhilfe Afghanistan initiative. In interview with Elisa Rheinheimer, he talks about ... END_OF_DOCUMENT_TOKEN_TO_BE_REPLACED

In Doha, Arabs from Morocco, Tunisia, Egypt and Algeria are gathering to celebrate the first ever FIFA World Cup to be held on Arab soil. The criticism from Europe? Over the top, ... END_OF_DOCUMENT_TOKEN_TO_BE_REPLACED

Canan Topcu came from Turkey to Germany as a child. In her essay, she describes how bothered she was by the racism she encountered in her country of origin when she travelled ... END_OF_DOCUMENT_TOKEN_TO_BE_REPLACED

All organisers use major sporting events like this year’s FIFA World Cup in Qatar primarily to advertise their country and promote a slick public image. This is not something we ... END_OF_DOCUMENT_TOKEN_TO_BE_REPLACED

A leading light of Israeli theatre, Ofir Henig has directed the Israel Festival and is the only female director to have been awarded the Israel Theatre Prize. These days, however ... END_OF_DOCUMENT_TOKEN_TO_BE_REPLACED

Comments for this article: It is possible to work together

Holy crap , so u guys want us to live in peace with ppl who already killed almost 2130 Palestinian In Gaza Strip

these jew brothers may be against the israel's policy in mass killing or massacre not in war. so they should yield pressure on their government that Arabs the honest people who welcomed jews to their motherland are the hosts and they are guests. now it is so shameful to see the guests surpassing the guests. Only evil-doers can do such crap.

END_OF_DOCUMENT_TOKEN_TO_BE_REPLACED
Social media
and networks
Subscribe to our
newsletter