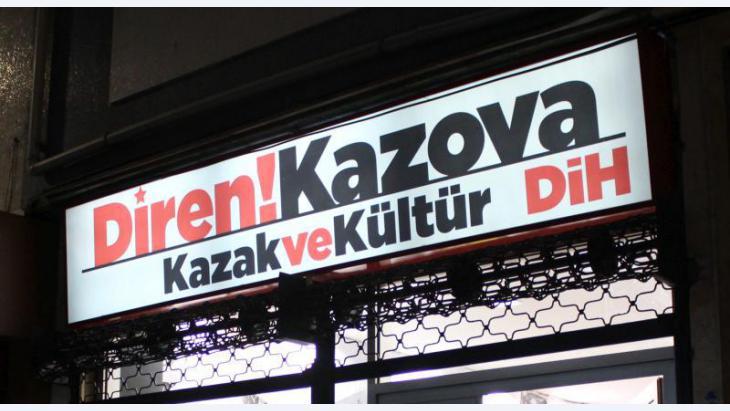 Kazova, a textile firm that began production in 1947 but went out of business in January 2013, is about to re-open as a workers' co-operative. The 11 men and women who want to relaunch Kazova following the conclusion of the legal proceedings relating to the closure of the factory have a motto: "production without a boss". They were inspired by the spirit of Gezi. By Ekrem Guzeldere

At the end of January 2013, the manager of the Kazova textile factory in Istanbul told his 94 workers that they had a week's holiday. Afterwards, the wages they were owed would be paid in full, and production would be resumed.

This turned out to be a bare-faced lie. The owners, the Somuncu family, used their employees' week off to plunder their own factory, taking machines, fabric, raw materials – anything that could be easily taken away. The workers were then dismissed with no notice, for absenting themselves from work "without permission".

"At the time, my monthly salary was just under €400," recalls 56-year-old Dursun Ceylan, who worked in Kazova's textile warehouse for 13 years. "For four or five months we received no money at all, although we were on a full production schedule."

In Celan's view, the crisis at Kazova began when the founder's grandson Umut started at the firm in 2003. "He was a motorbike freak and was into Harleys. They cost around €28,000 each, and he had eleven of them. A lot of money went on the bikes, but he didn't do anything for the company."

After their dismissal, the workers, who had been cheated out of their pay, went in search of a lawyer. The first was asking €1,100 just to launch the legal proceedings. Then they turned to the "Progressive Lawyers' Association" (CHD), which offered them a lawyer, who opened the case against the owners in mid-February 2013 for just €35.

But the legal proceedings to reclaim their wages were not the only thing triggered by this action; for the first time, the workers were now in contact with an experienced protest culture. Until that point, most of them had not been especially political. "We had workers who sympathised with the fascists; others supported the AKP, and there were a few social democrats. But of the 300 people who used to work there, only two or three ever went to the May demonstrations," says Nihat Ozbey, a former civil servant who spent six years working for the Kazova textile factory as a machinist. 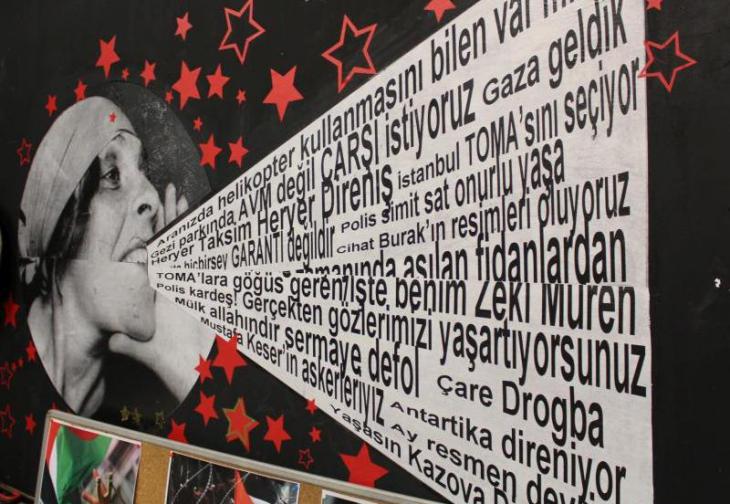 A poster in the Kazova shop and cultural centre, Istanbul. In June 2013, a small group of redundant Kazova factory workers occupied their former place of work. Only six months previously, the company had gone bust and all the workers lost their jobs

On their own initiative

Their contact with the lawyers and the circles they moved in convinced 28 of the 94 workers not to stop at legal proceedings. Between February and May 2013, the Kazova workers and their sympathisers marched to Istikal Street in downtown Istanbul every Saturday evening to demonstrate there. On 28 April, they also put up a tent outside the factory in the city's Bomonti district. "The women were there during the day, and the men at night," says Ceylan, adding: "During the protests, we saw that the police were protecting the owners and their interests, and taking action against us. This is why we decided to occupy the factory on 15 May."

The police did not waver and managed to prevent the occupation. During this period, the number of workers still protesting dwindled from 28 to 11. These 11 workers still form the "hard core" of the movement today.

Things were not looking good. The factory was closed; the owners nowhere to be found. There was no money, no machines, hardly any people and a long drawn-out court case. Then the Gezi protests began in and around Taksim Square, which is around 20 minutes' walk from Kazova.

Encouraged by the Gezi Park protest

The Kazova workers were there from the very start, a few of them even pitching their tents in Gezi Park. They divided their time between Taksim Square and the Kazova factory. "Inspired by the Gezi protests, we had the courage to occupy our factory on 28 June. Without this experience, we would never have dared to stand up to the police," explains Ceylan.

At this point, the factory was in a terribly dilapidated state. Even so, the workers managed to get a few of the remaining power looms going again and produced textiles for 25 days. Then the police intervened again, confiscating the machines. The trial before the industrial tribunal continues to this day.

Nevertheless, Ceylan, Ozbey and Ihsan Bulut from the DIH union initiative are confident that the case will be concluded in the near future. Then they hope to resurrect Kazova, using the same name, but in a different form. 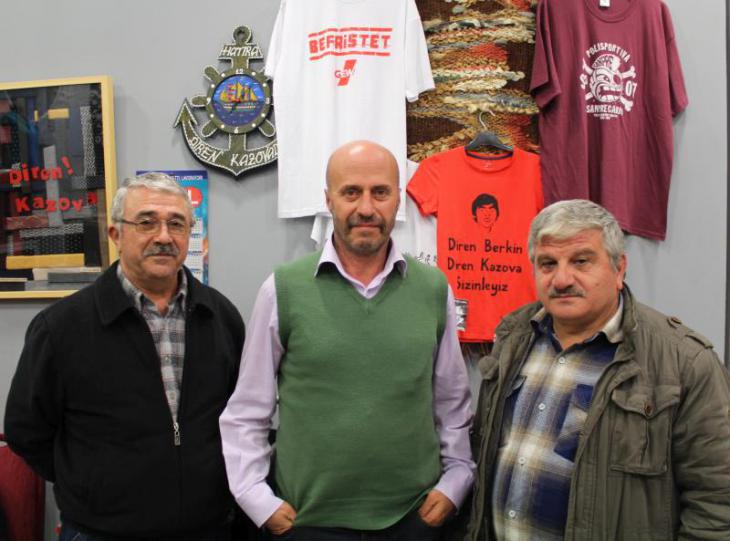 Kazova activists Bulut, left, Ozbey and Ceylan, right. "Inspired by the Gezi protests, we had the courage to occupy our factory on 28 June. Without this experience, we would never have dared to stand up to the police," explains Ceylan

But in spite of the continuing disputes, a lot is happening: since February 2014, there has been a sales room with an integrated cultural centre near the old factory site. In the future, the finished textiles will be sold directly in this shop. "We don't want the big retail chains to make money on our products; we want to sell affordable, good-quality textiles ourselves," says Ozbey.

They also want to open more shops in the future and make use of their good contacts abroad. These range from the Cuban national under-21s football team, whose shirts they designed, to occupied factories in Italy, France, Greece and Spain, all the way to the service workers' union Ver.di in Germany, whose representative recently visited Kazova's shop – a clear change of clientele.

In the past, Kazova presented Turkey's former prime minister, Recep Tayyip Erdogan, with gifts: "Only the best cashmere was used for his pullovers. He still wears some of them – the dark-coloured designs are ours," says Ceylan, not without some pride.

As promising as the co-operative's plans for the future sound, they are still vague. In legal terms, Kazova is a co-operative, so all decisions are communal. The aim is that there will be no hierarchies; everyone has the right to vote. Ceylan and Ozbey also talk about wanting to pay every worker around €1,248 a month – enough for a family of four to live on.

"It won't work right from the word go, but once production is up and running, that has to be our goal," says Ceylan. Even if most of the former workers were not directly involved in the protest, the door to the co-operative remains open to them at any time. "We want to be a big factory again, bigger than before."

There will be a solidarity evening in Kazova's shop on 5 December 2014, with food and an artistic programme. They will also be collecting money to finance their new start. The Kazova activists need around €250,000 to buy ten used machines – money that will not come together all at once, which is why they are planning to start production with three to four machines.

Home
Print
Newsletter
More on this topic
"Open Forums" in Turkey: New forms of participationTurkey a year after the Gezi protests: The dream is overInterview with Turkish composer Tolga Yayalar: Inspired by the sound of GeziCulture in Turkey before and after Gezi: The end of Cool Istanbul
Related Topics
Criticism of capitalism, Economy, Gezi Park protests, Human rights, Recep Tayyip Erdogan, Social movements, Taksim Square, Turkish opposition
All Topics

The recent escalation of violence in Idlib is also a result of the increasing tensions between Turkey and Russia. The victims are those in Idlib, caught up in a hopeless situation ... END_OF_DOCUMENT_TOKEN_TO_BE_REPLACED

A newly leaked document confirms how China is imprisoning Muslim minority Uighurs based solely on their religion. Naomi Conrad met with a whistle-blower and visited relatives of ... END_OF_DOCUMENT_TOKEN_TO_BE_REPLACED

After the attempted coup in Turkey in 2016, 134,000 people lost their jobs. Most of them are still unemployed and have to fight for health services and pensions. Many suffer from ... END_OF_DOCUMENT_TOKEN_TO_BE_REPLACED

The Kurdish YPG militia did the heavy lifting in the fight against the "Islamic State", yet many foreign YPG adherents, including Germans, have come home to find themselves under ... END_OF_DOCUMENT_TOKEN_TO_BE_REPLACED

At least 150 theatre professionals were recently fired without reason in Turkey, just days before they were expecting to receive permanent contracts. Creatives accuse the ... END_OF_DOCUMENT_TOKEN_TO_BE_REPLACED
Author:
Ekrem Güzeldere
Date:
Mail:
Send via mail

END_OF_DOCUMENT_TOKEN_TO_BE_REPLACED
Social media
and networks
Subscribe to our
newsletter