The imam of Florence has posted a picture of habit-wearing nuns splashing along the seashore on Facebook, calling for dialogue about burkini bans… but got his account blocked instead. The post by Izzedin Elzir got some 2,700 shares, and came in response to the French southern cities – like Cannes and Nice – prohibiting the wearing of burkinis on the beach.

″It′s incomprehensible. I have to send them an ID document to reactivate it. They wanted to make sure it′s my account – it′s a very strange procedure,″ the indignant imam told La Repubblica. 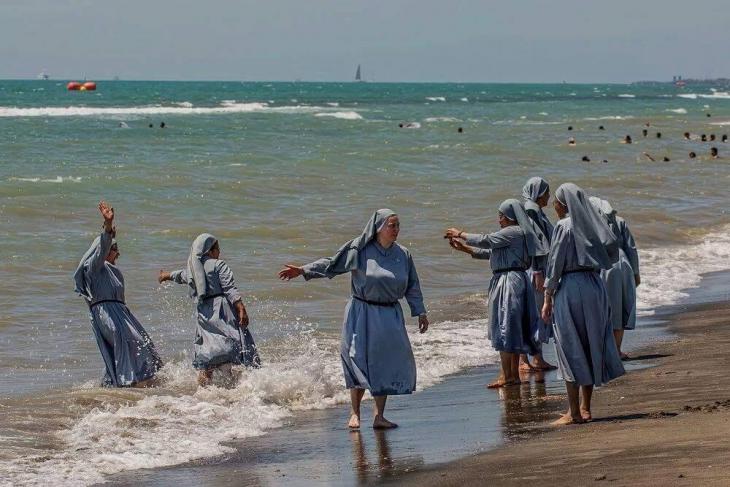 On Friday, his account was back in: the imam said he hopes it wasn′t blocked because of the picture, as it urges dialogue, and ″we live in a society of law and freedom.″

He also noted that the burkini had only come into fashion among Muslim women over the past few years and he expressed regret that ″some politicians in France, instead of responding to the political and economic needs of their citizens, are focusing on how Muslims dress.″

On Tuesday, Italy′s Interior Minister Angelino Alfano told Corriere Della Serra that Italy wouldn′t follow France′s suit and ban the burkini, but will step up regulations of imams and mosques.

Muslim Women and integration: Oppressed in the name of Islam?

This was not in France, number one.

Number two, these nuns are dressed as they are because they are part of the clergy.

That woman who had to remove her burkini was not a member of the clergy. I'm not sure she would be allowed to under Islamic doctrine anyhow.

No, it's just not the same thing.

Whether its France or not, does not matter. The argument is that when nuns wear the dress representing their religious views, nobody points a finger. But when it comes to muslims, suddenly the standards change.
Do you have to be a part of clergy to be allowed to wear your choice of clothes? Clergy have different rights on the beaches and muslims have different rights? that's insane.

In both cases, the clothing is based in the tenets of the religion, clergy or not. But, as you astutely pointed out, it goes against the doctrine of Islam to go uncovered. Under what circumstances do you think it acceptable to force someone to disrobe in public?

And the comment about France seemed to be in response to the policy of several FRENCH cities, not a claim that the photo came from France.

While true it didn't take place in France it does demonstrate a certain hypocrisy among other Europeans who'd like to see the ban imposed in their own countries.

Nuns are not members of the clergy, membership of one of the holy orders is a vocation true but not one with any ecclesiastical standing. Nuns by virtue of possessing the wrong genitals are barred from entering the cloth.

Fundamentally a convent or monastery is simply a club that has Papal backing, their rules, uniforms et cetera are their own; traditional perhaps but not mandated by the church proper... pretty much exactly the same as the Burka in that respect.

Although it must be said the Burka has nothing to do with Koranic law, the closest thing you'll find is an instruction for women to cover their cleavage with the tails of their scarf, curiously in the same verse that it instructs that men shouldn't gawp at said cleavage (you'll note that that part of the passage gets rather less press) Surah 24:30 if you're interested. It sort of assumes that scarf is worn (not too surprising considering that the abandonment of head-wear has only been popular in the last century) but it doesn't actually mandate it. Course some of the Hadith disagree, but the Koran does say that you should interpret it yourself and not trust other people to do it for you.

Whether or not the woman was a member of clergy, or whether she was allowed to be, is so irrelevant it's ridiculous. They both wear that clothing for purposes of modesty. Why is a nun allowed to be modest and a Muslim woman is forced not to be? Why does anyone think they have the right to make ANY woman show her body who does not want to? It is so wrong its infuriating!

Banning ANY type of clothing is placing a ban on freedom. That is certainly not LOVE.

In more ways, it IS the same thing. The nuns are dressed that way due clergy as you rightfully said, and clergy deems that is the right way to dress due modesty & appropriateness that a person of the cloth upholds. Now, all the 3 religions Judaism, Islam & Christianity, all have the same conservative dress codes if you care to study their origins and teachings. The same modest dress codes are still practised by conservative judaism, conservative christians (and its clergy and religious orders) and Islam. So to tell a nun to disrobe and wear bikini is the SAME as telling a Muslim lady to tear off her burkini as both regard the attire as not only cultural but also religious and a moral/doctrinal requirement based on the original teachings of the 3 major religions.

It does seem very unbalanced, banning burkini and allowing Nuns to paddle. Why not just let people dress how they want? If the Police are really this troubled by a burkini they are not doing their job.

END_OF_DOCUMENT_TOKEN_TO_BE_REPLACED
Social media
and networks
Subscribe to our
newsletter