"We feed off the rage; it's the motor for creativity"

Some two-thirds of the fifty or so actors working here are Jewish, one third are Arab. The audience ratio is less balanced, Ezrati concedes: "It's more difficult to attract Arabs to our theatre, they prefer to go to a purely Arab theatre."

"This despite the fact that all Arabs speak Hebrew, but most Jews don't know any Arabic," he says. The language of a production is a perennial issue. Shakespeare's best-known drama was recently transposed to the Middle East, with Juliet speaking Hebrew and Romeo Arabic.

There are currently 10 plays on the programme; with more than 200 performances every year. "In the beginning it was mostly about the Israeli-Arab conflict. Now we're focussing much more on societal questions, as well as conflicts within the Jewish faith community," says Ezrati.

The theatre has repeatedly come under fire from the political establishment. The situation has worsened since the passing of the Nation State Bill last summer, says Ezrati. Arabic is no longer an official language and Israel is defined as a Jewish state, although 20 percent of the population are Arab-Israelis. 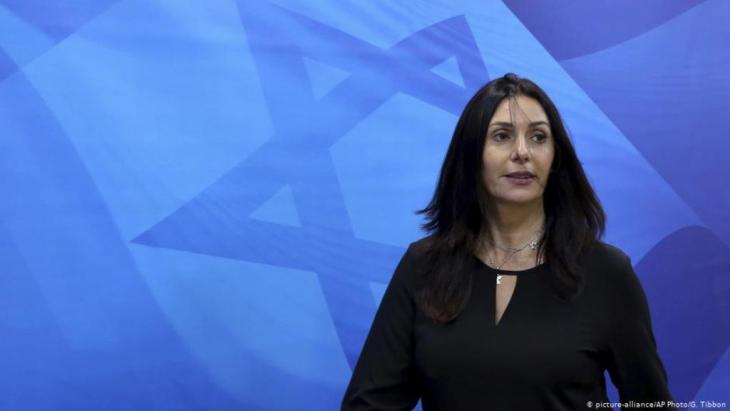 With her "Loyalty Law" project, Minister of Culture Miri Regev wanted to link funds for the promotion of culture to "loyalty" to the state. Politicians like opposition leader Tzipi Livni were critical even before the first reading of the law: "Culture does not exist if it is controlled by the government. Instead of culture, we will get propaganda"

When the theatre invited the Palestinian poet Dareen Tatour two years ago, the culture minister Miri Regev of the right-wing nationalist Likud party threatened to cancel all its subsidies. Tatour, who is an Israeli citizen, had been sentenced to five years in prison the previous year for a poem entitled "Resist, my people, resist them!" The court found her guilty of incitement to violence, as well as the glorification and support of terrorism.

Since 2011, what's known as the Nakba Law prohibits events in Israel commemorating the expulsion of the Palestinians. The law also empowers the finance ministry to cut public subsidies to institutions not recognising Israel as a Jewish state.

Since the introduction of this legislation, cultural establishments serving Jews and Arabs in equal measure perceive themselves to be especially vulnerable to subsidy cuts. The Arabic-language Al Midan Theatre in Haifa had to close two years ago for this very reason.

The Arabic-Hebrew Theatre in Jaffa has so far been able to stave off funding cuts. The money it receives from the public purse amounts to around 250,000 euros annually, about a third of the budget, the director explains. "Without regional and national funds we wouldn't be able to survive," he says.

This is why many cultural actors are now looking ahead with trepidation to parliamentary elections on 17 September. The snap elections prevented Miri Regev from pushing her cultural "Loyalty Law" through to a final vote in the Knesset.

The minister's bill envisages further funding only to projects and institutions that conduct themselves in a "loyal" fashion towards the state. "If we get the same government, then we have a problem. The Loyalty Law in culture is frightening," says Ezrati.

How does he see the future in such a broken nation? "Theatre folk like being in the opposition. We're here and we will continue doing what we're doing. Hatred of culture, the media and dissidents gives me energy. We feed off the rage, it's the motor for creativity," he says.

Ezrati sees his theatre as the "model for a democratic, secular state": Culture, he is certain, is "the bridge enabling us to live together". In his theatre in Jaffa, one gets a real sense how it could work, this co-existence.

Jordan is not only waging a vigorous battle against coronavirus, but also against the Middle East peace plan proposed by U.S. President Donald Trump. By Birgit Svensson END_OF_DOCUMENT_TOKEN_TO_BE_REPLACED

The anti-Israeli Quds Day did not take place this year – a first both for Iran and Lebanon's Hezbollah. While Hezbollah leader Nasrallah sees his organisation in a state of siege ... END_OF_DOCUMENT_TOKEN_TO_BE_REPLACED

The corona crisis has led to an upswing for the Palestinian textile industry, but has done little to relieve the dire straits in the territories. Without international support, ... END_OF_DOCUMENT_TOKEN_TO_BE_REPLACED

According to the latest Reuters tally, more than 2.54 million people are now reported to have been infected by the novel coronavirus globally and 177,004 have died. As Muslims ... END_OF_DOCUMENT_TOKEN_TO_BE_REPLACED

Around the Islamic world, lockdowns and curfews are being extended and religious ceremonies are being cancelled outright in the hope of slowing the spread of COVID-19. Here’s the ... END_OF_DOCUMENT_TOKEN_TO_BE_REPLACED
Author:
Alexandra Föderl-Schmid
Date:
Mail:
Send via mail

END_OF_DOCUMENT_TOKEN_TO_BE_REPLACED
Social media
and networks
Subscribe to our
newsletter