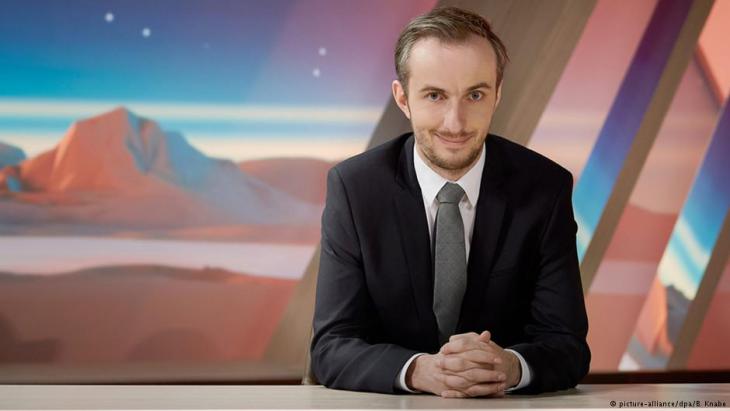 Jan Bohmermann's BE DEUTSCH
The danger of being earnest

Forever with his finger on the pulse, Jan Bohmermann, the ″enfant terrible″ of Germany′s satirists, has released a video that reveals a lot – and arguably, more than he realises. By William Glucroft

Have you seen what Jan Bohmermann has done? No, not that thing that hurt the Turkish president′s feelings and is archaically illegal in Germany (but most likely soon won′t be).

This thing, I mean. His ″BE DEUTSCH″ video has so far soaked up three-plus million views on YouTube. If you′re not yet one of them, you should be. It is hi-larious, a guaranteed crowd-pleaser across the Germany-ribbing spectrum — from those who merely regurgitate bromidic Nazi jokes, to those who have lived here long enough to steep in the German soul. Socks and sandals? Dosenpfand? Immanuel Kant in Jack Wolfskin rain gear? You′ll be LOL-ing all the way to the Volksfest. Bohmermann′s video says so much and more than it realises.

Germany′s strongest contemporary counterargument to the hard-to-disprove generalisation that Germans just aren′t funny (the late Robin Williams summed it up) still misses a key aspect of the very satire he, by standards here, excels at: satire isn′t earnest. Not about itself, at least. The Stewarts, Colberts and Olivers of our time are keenly aware they are merely messengers and take pains to guard against a zeitgeist eager to deify them. Böhmermann, meanwhile, comes off as Jesus preaching from the Mount. (Now He was an earnest guy.)

So what, you say. It′s funny. Its progressive message means well. Don′t be so earnest yourself.

Watch it a few times. When the laughter ebbs, you are left with a disquieting undercurrent of cognitive dissonance and uncomfortable historical comparisons.

The video, produced amid the hot mess of recent German state elections that brought the refugee-scared right (unsurprisingly) to the fore, sends Germans the message: Be proud. Be nice. Be Deutsch.

We are presented with one group of ″good″ people – cheery, relatable and pleasingly lit – squaring off against another group of ″bad″ people, gray and gaunt. The video ends with the goodies going after the baddies, leaving the viewer to wonder: what happens when the former gets its hands on the latter?

Wait. The last time Germans were whipped up into chasing down a shifty monolith said to be threatening the common good was 1938 and we all know where that led. In 2016, it′s seemingly ok to do the same, because the baddies are — for real this time! — bad: cut-and-dried racists who, by the way, employ the same blanket assumptions against gays, refugees or Muslims.

Or, 80 years ago, the Jews. In 1933, Hitler didn′t lead with, ″support me and I′ll exterminate the Untermensch.″ He promised a humiliated, hungry and jobless people the chance to be great again (some things never change, Mr. Trump) and he delivered. What began with the earnest conviction among Good Germans to do the Right Thing for the Vaterland ended in those Good Germans′ shell-shocked denial of their role in sending 11 million people to gas chambers and mass graves, destroying themselves and the continent in the process.

Such is the danger of earnestness. You become so lost in your own convictions and convinced of your righteousness that you lose the self-awareness necessary to check your own ingrained fears of – and imagined superiority over – the Other, whoever that may be. Earnestness is arrogance.

Today, when the woman on the Berlin street corner yells at you for crossing against the light despite no traffic in sight, it′s not only funny and frustrating, but terrifying: the earnest submission to rules, even when they no longer make sense, is an abdication of independent and critical thinking. It′s the root of humanity′s folly.

Because yelling at your fellow citizen is somehow socially acceptable.

Modern Germany struggles with two essential challenges to its democratic character. One applies to all liberal democracies, one is a unique consequence of its own history: ″BE DEUTSCH″ projects both beautifully, if not blindly.

Inclusion and tolerance are easy when those included and tolerated fit your preconception of ″good.″ Liberal democracies, however, don′t get to choose. That′s what makes them, by definition, liberal and democratic. Yelling ″WIR sind das Volk″ at the other side claiming the same mantle for itself is a race to the bottom of the rabbit hole.

Fascism creep is when a democracy starts choosing who′s in and who′s out. The AfD/PEGIDA people don′t make Bohmermann′s cut due to their intolerant and xenophobic attitudes, but a Haredi Jew and a Muslim in traditional Gulf Arab dress do. Like many Germans, Bohmermann has probably never met either (I stand to be corrected). The two are presented as cuddly caricatures of the secular liberal mind — they hug at the end! — rather than what they would more likely be in real life: intolerant and xenophobic. 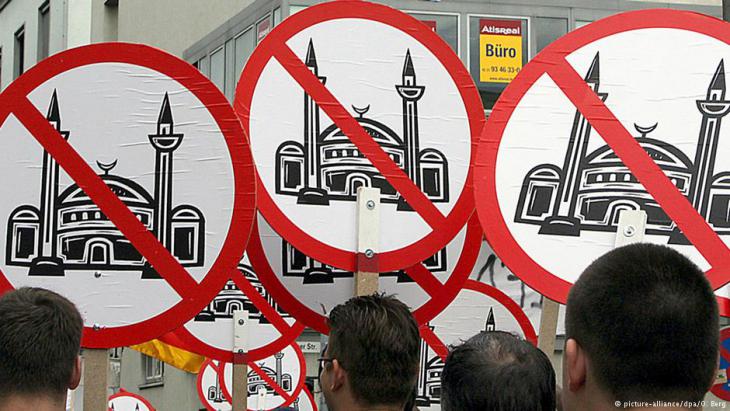 The danger of earnestness: "You become so lost in your own convictions and convinced of your righteousness that you lose the self-awareness necessary to check your own ingrained fears of – and imagined superiority over – the Other, whoever that may be. Earnestness is arrogance"

Does Bohmermann need to rally a third group to go after them when they express anti-Jewish or anti-Muslim sentiment, or would that be politically incorrect because they are themselves members of victimised groups? You see the slippery slope here.

Why does the Jew have to be depicted in black hat and curls at all? Why the Muslim in robe and keffiyeh? What′s the intended takeaway when the woman under the burka is revealed to be white? The earnestness to say something important strips the message of any semblance of progressive, let alone coherent, meaning.

Trapped in the context of the Final Solution

Every society expresses its fears and small-mindedness differently. For Germany, it′s all about the Jews. Arabs and Muslims, refugees among them, are getting attacked, but it′s the Jews getting asked if they feel safe. Islamophobia is on the rise, but anti-Semitism remains the problem.

There′s that earnestness again. Germany nobly tries to make up for what it knows it never fully can, its well-intended commitment to ″never again″, trapped in the context of the Final Solution. How can a society constantly reminded it built Auschwitz be racist? When that′s the primary conception of what racism is.

Progressive politics is a privilege of those who feel they′ve benefited from the liberalisation, democratisation and digital globalisation of our societies and economies. There are, however, a plurality of people who feel they haven′t. We should be mindful of their legitimate grievances: we dis and dismiss them in one fell swoop as ″stupid racists″ at our peril.

Everyone has legitimate claim to ″das Volk″. A healthy democracy allows its citizens the freedom to think for themselves, has faith they will exercise that freedom compassionately and steps in only when they don′t. You can′t regulate goodness.

This the earnestness of Jan Bohmermann′s satire misses. It′s funny, but what is it really saying? Perhaps more about Jan Bohmermann′s career than Germany′s future; a video telling Germans to be German is, curiously, completely in English.

Dalia Hatuqa is an experienced journalist who has reported on the Israeli-Palestinian conflict from Ramallah, Washington DC and Amman. A writer for Time Magazine, Foreign Affairs ... END_OF_DOCUMENT_TOKEN_TO_BE_REPLACED

Since President Abdul Fattah al-Sisi seized power in Egypt in 2013, he has ruled the country with an iron fist. Civil society, opposition and free press struggle to survive. Tens ... END_OF_DOCUMENT_TOKEN_TO_BE_REPLACED

Many Turks are dissatisfied with the international status of their country. At the same time, opinion polls reveal great scepticism among the Turkish population towards the USA. ... END_OF_DOCUMENT_TOKEN_TO_BE_REPLACED

The German government is planning to legalise cannabis before the end of this legislative period. So what does Islam have to say about its consumption? Will changing the law alter ... END_OF_DOCUMENT_TOKEN_TO_BE_REPLACED

In his latest book, Navid Kermani poses questions about God. It feels like no one could have done it better. His writing elicits smiles, doubt and wonder. By Melanie Christina Mohr END_OF_DOCUMENT_TOKEN_TO_BE_REPLACED
Author:
William Glucroft
Date:
Mail:
Send via mail

END_OF_DOCUMENT_TOKEN_TO_BE_REPLACED
Social media
and networks
Subscribe to our
newsletter