Philosopher Jawdat Said, little known in the West, has been propagating a vision of Islam free of violence for the past 40 years. His books have been widely read and discussed by Islamic activists in the Arab world. A profile by Bashar Humeid 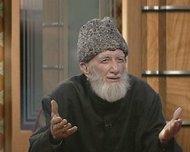 Jawdat Said challenges people to search for knowledge on earth, and not in the verses of the Koran

​​Published in 1966, the book "The Doctrine of the First Son of Adam: The Problem of Violence in the Islamic World" was the first publication in the modern Islamic movement to present a concept of non-violence. Now in its fifth edition, the book is still available today.

It was written by Jawdat Said, born in Syria in 1931, who moved to Egypt at a young age to study the Arabic language at Azhar University. While there, he took an active part in the cultural life of Egypt. He was also closely connected to the Islamic movement of that period.

Even then, Said warned against the negative effects of the violence being carried out by the Islamic movement in Egypt, and wrote his book as a direct response to the writings of Sayyid Qutb, who died in 1966 and is considered the father of militant Islam.

Other intellectuals of the Islamic world also turned against Qutb at the time, including for example Hasan al-Hudaybi, the leader of the Egyptian Muslim Brotherhood.

In the early 1980s, the Muslim Brotherhood in Syria began – in spite of Said's warnings – to rebel against the government of Hafez al-Asad. However, the revolt was put down with much bloodshed, and ended in 1982 with a massacre in the city of Hama.

Following this defeat, the movement began seriously entertaining the idea of demilitarization. At the time, the writings of Jawdat Said became increasingly popular in Islamic activist circles.

In the introduction to his book "The Doctrine of the First Son of Adam," Jawdat Said places himself in the tradition of Islamic reformers such as Abd al-Rahman al-Kawakibi (who died in 1902) and Muhammad Iqbal (who died in 1938), the mystic poet and philosopher from India.

Said also stressed the importance of the Algerian writer Malik bin-Nabi (who died in 1973) and his book, "The Conditions of Renaissance."

What these philosophers have in common is an emphasis on reformation within Islamic societies. They see the problems in their societies as the result more of unfortunate internal developments than of colonial intervention.

Said's works about non-violence are part of a series of writings that deal with personal and societal problems, and that serve as a guidepost for Islamic activists. They primarily address Islamic youth, and present an Islamic way of life that eschews violence.

Non-violence as a divine commandment

Said sees this approach as grounded in the Koran. In Sure 5, verses 27–31, one can read how the "God-fearing Abel" even declined to defend himself against his brother, although in the end, Cain murdered him.

Said sees this is a quest of mankind, to react "like Adam's firstborn son, who did not defend himself against the attacks of his brother." The non-violence exhibited by Adam's son represents, in Said's view, "a position to be aspired to by all mankind, and adhering to it is one of God's commandments."

In addition, Said refers to the stories of the various different prophets in the Koran and points out that the only charges they were accused of was their belief in the one God of creation. None of them, however, attempted to spread his ideas by means of violence.

Said sees this is a clear indication that the practice of violence is incompatible with the core faith of the Koran. But how does Said explain the other verses of Koran that call the faithful to battle?

Different interpretations of the Koran

According to Said's view, the Koran specifies two prerequisites for a legitimate war. First, war may only be declared if the opponent defies the fundamental Koranic principle of "no coercion of religion," i.e. if the enemy violates the principle of "freedom of opinion."

Second, the nation that declares war must itself adhere to this principle.

In his 1988 book "Read! For The Lord Your God is Benevolent," Said supports his view of an Islam free of violence by developing an important approach to the interpretation of the Koran.

Said points out that the various different interpretations of the text of the Koran presented a challenge even for the early followers of the Prophet Mohammad.

He quotes the fourth Caliph, Ali ibn Abi Talib, who in a disagreement with his opponents (the Kharijites) demanded disregarding the texts because each group had its own way of interpreting them. Instead, practical aspects should be discussed in an effort to reach a satisfying conclusion.

Said concludes from this that the Koran challenges people to search for truth in the real world and not in the texts of the Koran. The call to "wander the earth" is repeated 13 times in the Koran. Said thus concludes that this is a part of the divine revelation: to search for knowledge about the world, its history and its societies. Therein lies for him the "profound meaning and wonder of the Koran."

New interpretations of the Koran

The demand to "wander" is coupled with the demand to read. After all, "Read!" is the first word that was revealed to the prophet Muhammad. Said interprets this as a call to become familiar with the history of the human experience, which is primarily accessible through reading.

Supporting his view with approaches from the Islamic tradition, Said thus paves the way for a new interpretation of the Koran that no longer emphasizes the analysis of the sacred texts but rather places human experience in the forefront.

For this reason, Said's interpretations were sharply attacked by conservative thinkers. One of them, Adel al-Tal, wrote a book in 1995 in which he accused Said of being a "materialist in an Islamic disguise."

Conflict between science and violence

But to this day, Said has remained true to the text of the Koran. He quotes the Koran often to support his view of non-violence.

The passage he quotes most often is Sure 2, verses 30-33, in which the angels protest God's decision to put a successor on earth. Their argument: This representative will do nothing but create trouble and spill blood. In response, God teaches Adam "all things and their names."

Said understands this passage as a symbolic dispute between science and violence. In the language of the verses of the Koran, this means a dispute between "naming names" and "creating trouble and spilling blood."

Mankind, Said concludes, should and can use its God-given ability to reason to achieve peace on earth.

Portrait Muhammad Habash
A Turkish Model for Syria
The parliamentarian Muhammad Habash is considered the most popular representative of moderate political Islam in Syria. Kristin Helberg met him at his private Islam institute

Interview with Muhammad Shahrur:
"We Urgently Need Religious Reforms!"
The moderate Islamic thinker Muhammad Shahrur's contemporary interpretation of the Koran has attracted a lot of attention. In an interview with Ahmad Hissou, he calls for a religious reform of Islam, which he considers even more important than political reforms.

END_OF_DOCUMENT_TOKEN_TO_BE_REPLACED
Social media
and networks
Subscribe to our
newsletter