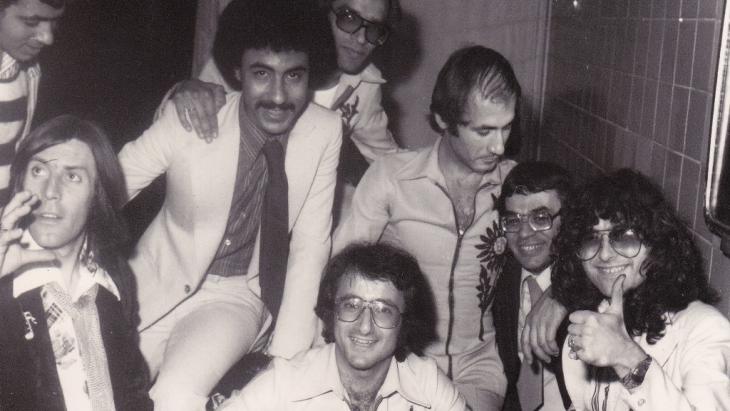 Jazz in the Arab world

The roots of fusion

Few people realise that American jazz has had a lasting impact on musical culture throughout the Arab world, laying the foundations for subsequent ground-breaking oriental fusion projects. By Amani Emad

During the cold war between the United States and the Soviet Union, jazz was a strong card for the Americans with which they influenced and inspired the world. What was once the black man′s song of sorrow and struggle became a world-renowned genre. In fact, the social and political developments experienced in jazz music have turned it into a “high art” in which only the most-skilled and best-trained musicians can thrive.

In the Arab world, jazz continues to inspire generations of musicians across genres. However, if we look at a sub-genre such as ″oriental jazz″, the influence can be said to be mutual. Modern jazz musicians and scholars took a lively interest in Arabic music, among other world music, to bring new soul into their work. One noteworthy example is Lloyd Miller′s ″A Lifetime in Oriental Jazz″, which was re-released in 2002.

Jazz experiments in Arabic music are not a new trend; the godfather of ″oriental jazz″ Yehya Khalil founded the Cairo Jazz Quartet – the first jazz band in Egyptian history – in 1957 when he was only 14 years old.

Following the band′s great success, Yehya travelled to the United States to pursue his studies in music, prospering under the tutelage of prominent figures in the jazz world. He would go on to perform in more than twenty countries.

In 1989, the pianist Fathy Salama founded the Egyptian ensemble Sharkiat that plays jazz with a Middle Eastern flavour. His music is characterised by its combination of folklore and jazz, and one of his most famous albums "Camel Dance" has been listed among the world′s best albums in the genre. Another band that gained fame in the Egyptian jazz scene is Eftekasat, which brings a fusion of jazz, folklore, and Sufi music.

The poet Khalil Ezz El-Din says that after the 1973 war in Egypt, specifically from 1974 until the mid-1980s, Egyptian independent bands had an experience parallel to that of American jazz, most notably Les Petits Chats, the band in which Omar Khairat played the drums and Ezzat Abu Auf keyboard. The band′s music remains one of the most important jazz milestones in Arab jazz history.

Owing to prevailing consumer tastes at the time, Les Petits Chats didn′t achieve great success in Egypt. Their popularity remained limited to the Cairo elite. Most people preferred the sha′abi songs of popular singer Ahmed Adaweyah, which resonated across all levels of Egyptain society.

Ezz El-Din remarks that it was Tamer Karawan who revived the jazz experience again in the early 2000s, composing scores such as "el hayat law le′ba" (If life were a game), in which Sheikh Zain Mahmoud is the vocalist, for the 2008 film "Geneneit el asmak" (The Aquarium). Besides Karawan′s contributions, Ezz el-Din believes that jazz has played a very small role in Egyptian films, with only brief passages being inserted in films such as "Leh Khaletny Ahebak", produced in 2000.

Last but not least, Egyptian singer Mohammad Adaweyah deserves a mention. The singer has released two albums "Men Kelmetein" and "El Tayeb Ahsan", both of which are strongly influenced by jazz.

Perhaps the most important jazz experiment in the Arab world was that of Ziad Rahbani, who collaborated with various Lebanese singers including Salma Mousfi, Rasha Rizk and Joseph Sakr, releasing several albums. His music has broadened the Arab jazz experience, with works such as "Besaraha" (Frankly), "El Ra′y el ′Am" (Public Opinion) and "Dawerha Dor."

In the late 1970′s and early 1980′s, as well as following the Lebanese civil war, oriental jazz was one of the most popular music genres in Lebanese society. Jazz had many fans in Lebanon, which helped the genre gain a presence. Another Lebanese jazz composer is the saxophone player Toufic Farroukh, who is known for mixing Arabic music with jazz motifs.

In Sudan, Amira Kheir, who is also known as "the Diva of Sudanese Desert", has introduced a distinctive style of Sudanese jazz music, of melancholy and melodrama, inspired by the desert and Sufi music.

Finally, in Morocco, Malika Zarra has managed to achieve great success by fusing Gnawa and African music with jazz.

The village of Vakıflı in the southern Turkish province of Hatay near the Syrian border, population 150, is the last remaining Armenian village in Turkey. Lately, interest in the ... END_OF_DOCUMENT_TOKEN_TO_BE_REPLACED

Social media make many things possible – including the unwanted circulation of intimate private photos. This has given rise to new forms of crime and sexual blackmail. An ... END_OF_DOCUMENT_TOKEN_TO_BE_REPLACED

The change in U.S. president is also having an impact on the conflict between Turkey and Greece. Since the USA has started to play the Greek card, the strategic situation in the ... END_OF_DOCUMENT_TOKEN_TO_BE_REPLACED

Arab women played a leading role in the protest movement of 2011. Since then, ongoing social transformation has had a considerable impact on their lives. What is their assessment ... END_OF_DOCUMENT_TOKEN_TO_BE_REPLACED

They’ve already got the Louvre; they’ll soon have a Guggenheim Museum as well – and now the Emirates have added literature to their quest for cultural supremacy in the Arab world ... END_OF_DOCUMENT_TOKEN_TO_BE_REPLACED

Years in the making, Sisi's elite New Administrative Capital will isolate most Egyptians from their centres of government in an effort to fortify the regime against any social ... END_OF_DOCUMENT_TOKEN_TO_BE_REPLACED
Author:
Amani Emad
Date:
Mail:
Send via mail

END_OF_DOCUMENT_TOKEN_TO_BE_REPLACED
Social media
and networks
Subscribe to our
newsletter