Imam Feisal Abdul Rauf maintains that religion holds one of the keys to resolving the Israeli-Palestinian conflict. While religion is not the primary problem in Israel-Palestine, Rauf says, it is a primary part of the solution 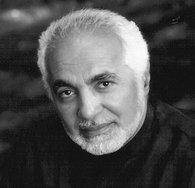 Drawing inspiration from the remarkable period of the Cordoba Caliphate in present-day Spain: Feisal Abdul Rauf, Egyptian-American imam and founder of the Cordoba Initiative

​​ I consider the Israeli-Palestinian conflict the single biggest obstacle to eliminating Muslim-Jewish antipathy. Although this dispute is fundamentally about the distribution of assets and the power to control decisions, it is frequently portrayed as a religious conflict. And too often, opposing sides have used erroneous or out-of-context interpretations of their scriptures to demonise the other and to provide justification for not striving towards a just peace.

From an Islamic perspective, this could not be more misguided, as we are given a number of powerful principles and narratives in the Qur'an that propel us towards justice, peace and communal harmony. It is my belief, therefore, that while religion is not the primary problem in Israel-Palestine, it is a primary part of the solution.

Scripturally, Muslims and Jews are united by the Prophet Abraham's legacy embodied in the "Abrahamic ethic", which is at its core a monotheism which asserts human liberty, equality, and fraternity. The Qur'an never tires of repeating that its task is to re-establish this ethic and that Muhammad and all the prior prophets came to do just that: "The nearest of people to Abraham are those who follow him, and this Prophet [Muhammad] and those who believe," (The Qur'an, 3:68). 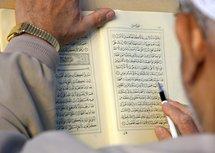 "O People of the Book! Let us now come together": according to Feisal Abdul Rauf, the Koran is a profound inspiration for dialogue and peace

​​ Islam defines itself not so much as the religion of Muhammad, but the religion of God, originally established by Abraham. Stemming from this shared heritage, Jews (as well as Christians) are described by a special name in the Qur'an: "People of the Book", ahl al-kitab, or a "scriptured people". Muslims believe that God sent the Jewish people scriptures containing the divine teachings of God's message through their prophets. As such, they have the true religion.

To deny this is to contradict the Qur'an, which does not merely recognise the similarity of Jews to Muslims; it identifies Islam with them. "Say [to the People of the Book]: We believe in that which was revealed to us as well as that which was revealed to you. Our God and your God is One and the same. We all submit to Him," (The Qur'an, 29:46). This unity means that although disagreements between us certainly exist, these are no more than family disputes.

The Qur'an does criticise Jews for failure to uphold the Torah and for excessive legalism and exaggerated authoritarianism by some rabbis. These passages and others have been manipulated to typecast Jews and unfairly implicate them in contemporary problems. However, there is no criticism that the Qur'an has addressed to Jews that Jews have not addressed to themselves or to their tradition.

Furthermore, no Muslim can deny that many of these faults are universal ones, shortcomings that are present in any religious community, including our Muslim community. In fact, the Qur'an never totally condemns any people, since the critical verses stand side by side with those verses that justify the righteous. 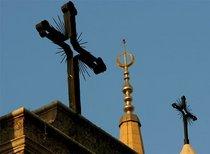 "Dialogue offers the opportunity for uncovering the common ground of the shared values and goals that resonate in each of our faiths," says Feisal Abdul Rauf

​​Our mandate, therefore, is to not divide our communities into hostile factions on account of religion, precisely as some have done. God's call in the Qur'an to Jews and Christians, as well as to Muslims, still stands as proper, relevant and necessary today as it was when it was first revealed some fourteen centuries ago:

"O People of the Book! Let us now come together under a fair principle common to all of us – that we worship none but God, that we associate nothing with Him, and that we take not one another as lords beside God," (The Qur'an, 3:64). This passage and others provide profound inspiration for dialogue, collaboration and, ultimately, peace.

Dialogue, the first step, offers the opportunity for uncovering the common ground of the shared values and goals that resonate in each of our faiths and forge personal bonds and relationships of trust, which carry the potential to enable collaborative efforts. I advocate for such an action-oriented dialogue that moves beyond talk.

Muslim and Jewish organisations and institutions must build coalitions to partner in peace. Although this should take place within numerous sectors, it is especially critical at the level of religious leadership – between rabbis and imams and among faith-based activists. It is these friendships and partnerships that can help bring a just peace to Israel, Palestine and the broader region and, furthermore, they can transform the relationship between Muslims and Jews globally.

Such work towards transformation could draw its inspiration from the remarkable period of the Cordoba Caliphate in present-day Spain. During its peak in the tenth and eleventh centuries, Cordoba was the most enlightened, pluralistic and tolerant society on earth, one where Muslims and Jews enjoyed a special relationship.

My own organisation, the Cordoba Initiative, draws upon this legacy to once again shift Jewish-Muslim relations towards collaboration around our common values and interests. We are utilising a powerful model of action-oriented and faith-based partnership to create a tipping point in Muslim World-West relations within the next decade, including in the context of Israel and Palestine. I believe that this is our Abrahamic mandate.

Imam Feisal Abdul Rauf is the chairman of the Cordoba Initiative which works to improve Muslim-West relations. This article is part of a special series on Jews and Muslims in each other's narratives and was written for the Common Ground News Service (CGNews).

END_OF_DOCUMENT_TOKEN_TO_BE_REPLACED
Social media
and networks
Subscribe to our
newsletter