Herr Mohseni, where do you stand yourself? You were born here, and your parents are from Afghanistan. From that point of view, it’s not something that has anything to do with you.

Mohseni: Yes, that’s true. I have Muslim friends who identify very strongly with the conflict, because they see it as a religious one. Personally, I don’t see it that way at all. For me, it’s a political and economic struggle, like every other conflict in the world. I see myself as an observer who wants to understand more.
De Boor: It’s really great for me to hear someone say it’s a conflict like any other. There are a lot of people who don’t have anything to do with it on a personal level, but they’re very sure about who the good guys are, and who is in the wrong...

Do you feel it is normal that, as someone who was born a Protestant in East Germany and converted to Judaism, you are addressed differently on the subject of Israel to someone who has no connection to Judaism at all?

De Boor: I think it’s natural for people to speak differently about the conflict when a Jewish person is in the room. We do have a special connection to it. Personally, I have a lot of friends in Israel, I studied there and I go back regularly for holidays.

But here in Germany, I prefer to steer clear of these discussions, because it doesn’t matter whether a non-Jew is pro or anti-Israel, they tend to lecture rather than question. And it’s hard to convey the fact that Israeli society is actually really pluralistic, there are left-wing and right-wing people, orthodox people on both left and right, secular Jews who are really conservative... 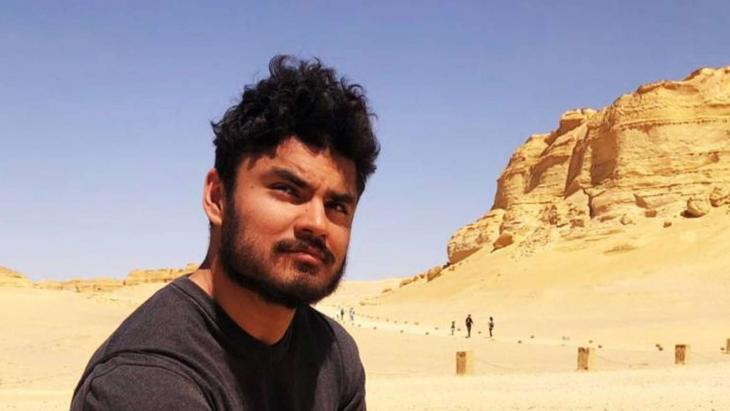 Hani Mohseni, 23, was born in Munich in 1996 as the son of Afghan parents and is a scholarship holder of the Avicenna Talent Foundation. He is currently doing his Master's in Logic and Philosophy of Science. The devout Muslim first met young Jews in the "Dialogue Perspectives" programme run by the Avicenna and Ernst Ludwig Ehrlich academic foundations. Today he is involved in encounters between the two communities "in order to escape his own ideological bubble through dialogue and exchange"

In Germany the Middle East conflict is relevant in another respect, because it is regarded as a source of so-called Muslim anti-Semitism.

De Boor: Yes, but there, the message is often that we have to protect “the Jews” from “the Muslims”. The AfD makes that claim really prominently. It’s extremely dangerous to connect Israel, Judaism and a so-called Muslim anti-Semitism in that way. I for one have no desire to be protected from “the Muslims” by these Germans.

When we talk about Muslims in Germany, the headscarf issue always comes up. We have a partial headscarf ban for judges and teachers. Does that affect Jews, too?

Mohseni: Personally, the first thing that annoys me about this is the double standards being applied. On the one hand, people argue that religion is a private matter that has no business in public life, and on the other it’s then only applied to Muslims.

De Boor: It just makes me want to convince Jewish male judges to wear the kippah, for instance, just to make it clear that a ban like this affects Jews as well. That’s why programmes like “Dialogue Perspectives” are so important, so that we can all pull together and communicate more to the majority society: if this affects one group, it affects us all.

You’ve already mentioned the circumcision debate: that’s a key issue. Here in Germany, there are some very strong reservations about the Jewish and Islamic practice of circumcising little boys, including some who even claim it constitutes assault. Does that sense of “we’re in the same boat” hold true here, too?

De Boor: I remember a lecture on anti-Semitism and Islamophobia by our two funders. A Muslim woman said that the moment the Jewish community weighed in on the circumcision question, she thought: finally, this issue is going to be taken seriously, we’ve got the Jewish community with us now and people in Germany listen to them.

To which a Jew said the exact opposite: there are so few of us Jewish people, we’ll only be heard if you Muslims are with us, because there are so many more of you.

As far as the debate itself goes: I thought it was interesting that the criticism of Jewish and Islamic circumcision started up pretty much straight after all the cases of abuse in churches and schools were revealed. As if there was this sudden need to say that Jews and Muslims damage their children, too... It was so severe that as a Jewish person at that time, you thought: if this is banned in Germany, we don’t have a future here.

A French artist has used photos of torture from Abu Ghraib for an oversized artwork at the Berlin Biennale. Reactions from fellow artists have been mixed, with some criticising ... END_OF_DOCUMENT_TOKEN_TO_BE_REPLACED

Since Ali Khamenei, Iran's most powerful man, has openly and unconditionally come out in support of Putin's war in Ukraine, logistical help is on its way, with an allegedly ... END_OF_DOCUMENT_TOKEN_TO_BE_REPLACED

It is possible to write about the Holocaust and the crimes of colonial powers without downplaying anything. In her latest book, Charlotte Wiedemann focuses on the numerous blind ... END_OF_DOCUMENT_TOKEN_TO_BE_REPLACED

This year Annemarie Schimmel, the great German scholar of Islamic studies, would have turned 100. Unique within the German and international academic community of her time, ... END_OF_DOCUMENT_TOKEN_TO_BE_REPLACED

The highly controversial Indian blockbuster "The Kashmir Files“, on the exodus of Kashmiri Hindus in the 1990s, is characterised by unilateral representations, negative ... END_OF_DOCUMENT_TOKEN_TO_BE_REPLACED

END_OF_DOCUMENT_TOKEN_TO_BE_REPLACED
Social media
and networks
Subscribe to our
newsletter