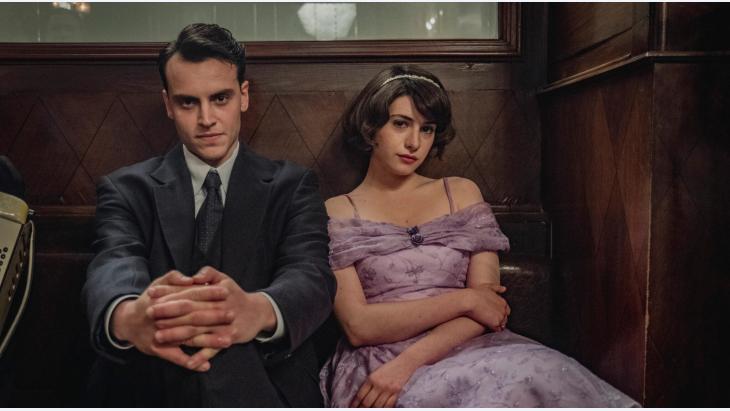 Jews in Turkey
Netflix' "The Club" and Istanbul’s difficult past

A new Netflix drama series showcasing Istanbul's Jewish community in the 1950s depicts a once multicultural city. It is a production that pulls no punches, exposing dark chapters in modern Turkish history. Ayse Karabat reports from Istanbul

At the Golden Horn (Halic), passengers on the Istanbul metro are greeted by an ad on a building as the subway surfaces briefly to cross the historic waterway. The ad says, "The Club of the people who feel they are 'other'. You, too, are welcome to The Club."

This ad in Halic, home to sizeable non-Muslim communities until the 1950s, is promoting the new Netflix drama "The Club". The first, six-episode series of the Netflix hit uncovers the recent history of rampant discrimination against non-Muslim minorities in Turkey and centres around a Jewish woman from Istanbul who works at an up-and-coming Istanbul nightclub.

Showcasing stunning cinematography, the series also pays loving attention to detail. Nothing escapes the designers' notice: rather than its contemporary cone-shaped roof, the Galata Tower is shown in the backdrop to some scenes with a gradual terrace at its top, just as it really was in the 1950’s.

A rare opportunity to become acquainted with Jewish culture

Today, in Halic, there is not much left of the city's Jewish heritage. Only the sharpest of eyes will catch the vestiges of this vanishing history, such as the worn-down Stars of David on the facades of some buildings, former synagogues – one of which has been turned into a cafe, or in the name of Hamursuz Street. "Hamursuz" is the Turkish name for the Jewish Passover, though it literally means "dough-less".

Few are aware of these hidden gems, and little or nothing is known about the Jewish culture by the Turkish majority. "The Club" provides Turkish viewers with a rare opportunity to become acquainted with the culture of Turkish Jews. 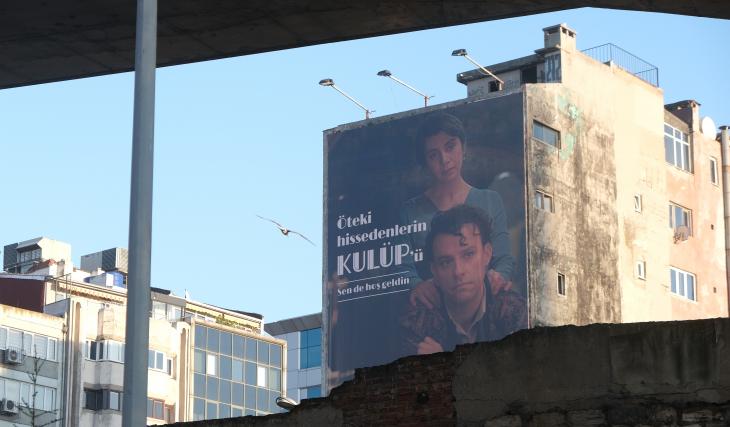 Up-ending common stereotypes: "Until today, these were the characters presented to us on Turkish television: the textile merchant Nedim, pawnbroker Solomon, Mossad agent Moshe, Jewish businessman Mison: a uniform and generalised Jew was shown to people living in Turkey, using all of the known anti-Semitic tropes. But I, and thousands of Jews who have lived and still live in Turkey, know very well that we are not like this," says Gabi Behiri, an Istanbul-born Jew

Beginning with a Hebrew Shabbat prayer, the series dives deeper into the culture during the episodes that follows. It reveals many aspects of Jewish life: the rituals that are observed, the practice of kissing a "mezuzah" when entering a room, and a Purim party, where a minor character in the series tells the main character Matilda, "You must know what Purim is. It is the holiday of contradictions, the revealing of those that have been hidden", while Matilda goes on a quest to find out who the antagonist in the series, Celebi, really is.

"The Club" is the first Turkish series ever to place the Jewish community at the centre of its story. Some scenes were shot in Turkish synagogues, which in real life only open their doors to non-Jews on rare occasions, like the European day of Jewish culture, under strict security measures. Significantly the series also challenges prejudices held by the dominant Turkish culture about Jewish life, which has been constructed by the film industry – especially by some popular TV series or films – to characterise and depict them either as greedy business people or simply as evil. But in "The Club", they are portrayed as individuals who go to jail, grow up in orphanages, fall in love and suffer.

In a lengthy Twitter thread, Gabi Behiri, an Istanbul-born Jew, underlines how "The Club" up-ends common stereotypes. "Until today, these were the characters presented to us on Turkish television: the textile merchant Nedim, pawnbroker Solomon, Mossad agent Moshe, Jewish businessman Mison: a uniform and generalised Jew was shown to people living in Turkey, using all of the known anti-Semitic tropes. But I, and thousands of Jews who have lived and still live in Turkey, knew very well that we are not like this," he said in one post. He added that "The Club" is a very good first step towards demolishing these prejudices.

In another tweet, Behiri said that after watching "The Club", he had a conversation with his parents over what he described as the 'bitter truth' regarding their almost-vanished language, Ladino, the historical language of Sephardic Jewry. Ladino is a blend of mediaeval-Spanish, Hebrew and Aramaic, which includes elements of Turkish and Greek and is sometimes spoken by the characters in "The Club".

There are also some Ladino songs in the show. One of them, "Adio Kerida" ("Farewell, My Love") by Yasmine Levy plays in the background in a scene where one of the characters, Rasel, a 17-year-old Jewish girl, introduces herself as a Muslim called "Aysel" to a Turkish man she falls in love with. He later breaks her heart having found out her true identity.

The series not only reminds viewers of a forgotten language, but also breaks the blanket of silence surrounding the draconian wealth tax imposed on non-Muslims in 1942, which proves central to the plot of the show.

Those who were unable to pay their dues were transported to labour camps in the Sivrihisar district of the Central Anatolian province of Eskisehir and the Askale district of eastern province of Erzurum, where some were worked to death.

Viktor Apalaci, a columnist for the Turkish Jewish Salom newspaper, wrote that his father was among those who were sent to Askale when he was just one-year-old, but that neither his father nor his grandparents ever talked about this event that shaped their lives. He wrote that he learned about it long after his father died.

On the release of the series, one of the three non-Muslim members of the 600-seat Turkish Parliament, HDP MP Garo Paylan requested a parliamentary inquiry into the 1942 Wealth Tax. In his motion, he reminded his fellow parliamentarians that the tax was intended to create a "Turkish bourgeoisie". The then PM Sukru Saracoglu, who was among those who pushed through the tax bill, is quoted as saying, "this law is a revolutionary law. We have the opportunity to gain economic independence. We will completely eliminate the foreigners that dominate our market and restore the Turkish market to the Turks".

Paylan said that up until today the truth about the wealth tax had not been revealed, despite the fact that thousands of non-Muslim Turkish citizens had to leave the country after it was implemented.

Another incident that led minorities to leave Turkey – most of whom were Turkish Greeks (Rum) from Turkey – were the pogroms that took place on 6-7 September 1955, when state-organised mobs attacked the properties of non-Muslim minorities in Istanbul after a newspaper ran a fake headline that the house of modern Turkey founder Mustafa Kemal Ataturk in Thessaloniki, Greece had been destroyed by a bomb. A new trailer for the second season of "The Club" implies that the drama will also cover the 1955 pogroms.

Not everyone has accepted the series as a rare opportunity to recognise the realities and experiences of Turkey's non-Muslim minorities and confront the wrongdoings of the past. Conspiracy theorists have already created many stories claiming that the aim of the series is to make Turkey pay compensation to them and divide the country.

Salih Bicakci, associate professor of international relations at Istanbul’s Kadir Has University and one of the very few Hebrew-speaking academics in Turkey, is quick to remind us that even minor news items relating to Israel’s treatment of the Palestinians are likely to impact negatively on the 25,000 or so Jews who remain in Turkey.

"Who watches series like ‘The Club' anyway? The usual people who are already sensitised towards minority rights. Some, I am sure, who had little awareness prior to watching the series probably found it thought-provoking. But how many are we talking about? Personally, I would prefer to see minorities taking on the main roles in productions that portray them not as 'the others', but as part of the general public," he told Qantara.de.

The second season of "The Club" will air in January 2022.

Home
Print
Newsletter
More on this topic
Netflix "The Club" Part 2 official trailerJews in Turkey – a varied historyInterview with Corry Guttstadt: Turkey, the Jews and the HolocaustThe Islamic Republicʹs Jewish minority: Celebrating Sabbath in IranJudaism in Afghanistan: Kabul's one remaining Jew
Related Topics
Ataturk, Cinema, History of Islam, History of the Near and Middle East, Human rights, Jews in the Islamic world, Judaism | Jews, Media in Turkey, Minorities in the Muslim world, Racism | discrimination
All Topics

How is one to convey the history of Islamic images of Muhammad freed from today’s polarised politics? What are the challenges and pinch points of this particular academic ... END_OF_DOCUMENT_TOKEN_TO_BE_REPLACED

A Tunisian farmer attaches a machine to a cow's udder and sets the pump whirring, but he only expects to fetch less than half the normal amount of milk amid soaring fodder prices END_OF_DOCUMENT_TOKEN_TO_BE_REPLACED

Food prices doubled, salaries halved, banks restricting withdrawals: Egyptians now have the same problems as the Lebanese. But if things get worse here, the fallout will be far ... END_OF_DOCUMENT_TOKEN_TO_BE_REPLACED

Any reconciliation between Turkey and Syria’s Assad regime would have disastrous consequences for many Syrians, explains Syria expert Kristin Helberg END_OF_DOCUMENT_TOKEN_TO_BE_REPLACED

Iraq bears the scars of decades of conflict and has seen its antiquities plundered, yet the House of Manuscripts' collection has managed to survive END_OF_DOCUMENT_TOKEN_TO_BE_REPLACED

END_OF_DOCUMENT_TOKEN_TO_BE_REPLACED
Social media
and networks
Subscribe to our
newsletter