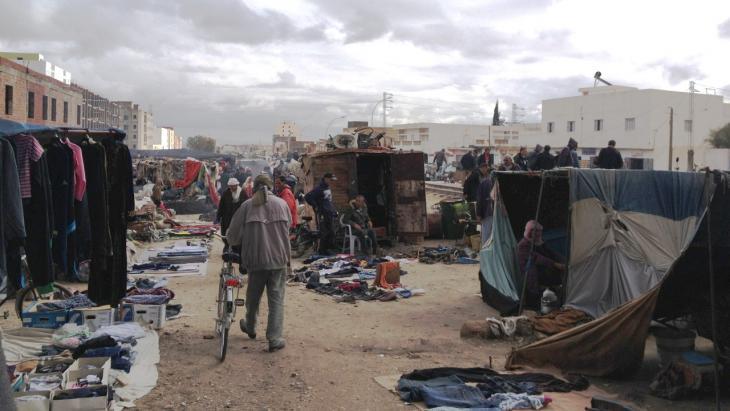 Jihadism in Tunisia
The invisible enemy

Al-Qaida in the Islamic Maghreb has established a base in Tunisia, from where the Okba Ibn Nafaa Brigade apparently planned the attacks on the Bardo Museum. Beat Stauffer paid a visit to the province and city of Kasserine, which are viewed by many as a hub of jihadism in Tunisia

Kasserine is one of the birthplaces of the Tunisian revolution. More than 50 people were shot dead here in the final days before the dictator Ben Ali took flight. To this day, however, the inhabitants of the nondescript provincial capital are still waiting for the revolution to pay dividends.

In fact, the opposite seems to be the case: everyone says that things are worse here now than they were under Ben Ali. As if that weren't bad enough, Kasserine has been daubed with an ugly label for the past two or three years – the province has become a kind of capital of jihadism since the Okba Ibn Nafaa Brigade entrenched itself in the nearby Chambi Mountains.

Those visiting the city of Kasserine get the impression that it is a dull, rather rundown provincial city with little charm to its name. It celebrates normality by day, with people pursuing their everyday activities. By the afternoon, the cafes are full of men; the older patrons play cards while the younger men – with their black leather jackets and gelled hair – watch TV. It is noisy and heavy smoking is almost mandatory. 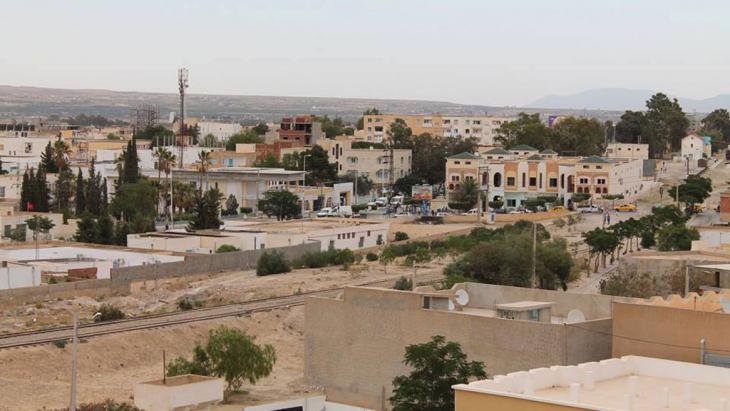 The city of Kasserine has many faces. The city centre looks like a normal Tunisian city, but as soon as one leaves the centre, the standard of housing and living conditions declines dramatically

Anyone leaving the main road, however, soon encounters dire poverty. A straggling market selling mainly second-hand clothes and shoes has all the shabbiness of the Sahel. Only a few hundred metres away, goats feast from overturned rubbish bins on an unofficial dump. A handful of women are sitting on a low wall next to them.

The poor outskirts of the city, such as Cite Ennour, offer a similar picture. It is instantly clear here why the city is one of the poorest in Tunisia. There are dilapidated houses, decrepit public buildings, dust and dirt at every turn. It was in these areas that the uprisings happened in early January 2011. Those involved were almost entirely young people with nothing to lose. It is doubtful that much has changed since then. The province of Kasserine still has the highest unemployment and illiteracy rates in Tunisia.

The streets quickly empty once darkness falls, the city looking deserted by 9 p.m. The only people to be seen are heavily armed security guards. The few banks that exist in the city are also heavily secured as if they contained the country's entire gold deposits. The locals know best why they prefer to stay inside: small detachments of the al-Qaida brigade have repeatedly advanced into the city centre, killing soldiers and even trying to storm the house of the former interior minister. 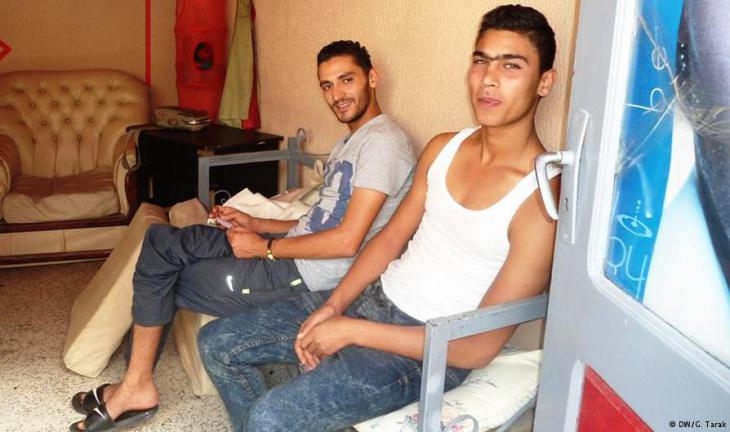 A life without work: Kasserine, one of the birthplaces of the Arab Spring in Tunisia, has remained a hinterland with no prospects, despite the uprising of 2011. Investors are urgently needed but are nonetheless few and far between

"The jihadists are in our midst"

But are the terrorists really still in the Chambi Mountains, the highest peaks in Tunisia? Many in Kasserine doubt it. Last winter was very hard; the jihad fighters, they say, could never have survived for months in the snow-covered mountains. "The jihadists are in our midst," says Tarek Khadraoui, president of the small non-governmental organisation Amal – meaning "hope" – which focuses on educational projects. To be precise, he thinks they are living incognito in poor suburbs such as Cite Ennour. From there, he says, they prepare their attacks, send provisions to the few fighters who are still holed up in the mountains and spread news via social networks. One of the two involved in the Bardo Museum attack also came from Cite Ennour.

For Tarek Khadraoui, it is no coincidence that young men with no work or prospects in these poverty-stricken, squalid areas have turned to radical groups. He says the best approach is to seek dialogue with them, to extract them from the extremists' influence. "The problem can only be solved with a really new policy that gives young people from the hinterland genuine prospects," says Khadraoui. Himself a petro-chemist without work for years, he knows what he is talking about.

Other young activists, such as Hejr Salhi, a young communication studies graduate, take a similar view. The situation in Kasserine was difficult even before the revolution, she says; now it is almost hopeless. "Terrorism grew out of this anger," says Salhi. Today, she says, Tunisia's "money barons and politicians" are fighting the population from above; the state urgently needs to win back the people's trust. 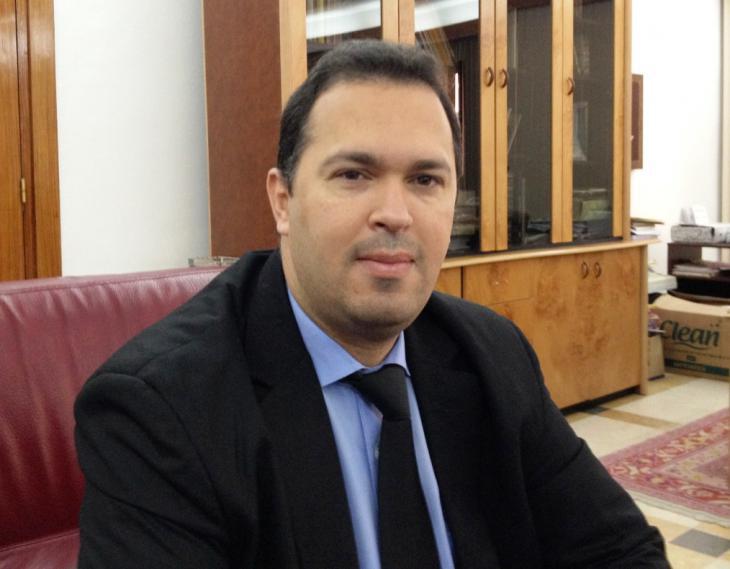 No fear: Atef Boughatass, governor of Kasserine, speaks openly about the political and economic challenges facing his region. Nevertheless, he considers the influence of terrorist fighters in the country to be a temporary phenomenon. "These are the terrorists' last days," he told Beat Stauffer

Combating resignation one step at a time

Young activists say they can make out initial steps in this direction. For example, the new governor of the Kasserine province, only 41 years old, is much more open and willing to enter into dialogue than his predecessors. At a meeting in his office, Atef Boughatass launches into a description of the huge challenges he faces on a daily basis. Yet Boughatass is firmly convinced that the Tunisian state will succeed in solving its problems, for instance by creating a free trade zone along the border to Algeria.

When it comes to terrorism, the governor is categorical: the attack on the Bardo Museum was a "sign of weakness," he says. "There are only 20 to 30 fighters still living in the Chambi Mountains," says Boughatass. "These are the terrorists' last days." However, less than a week after this interview, the al-Qaida brigade launched another attack, killing five soldiers in an ambush close to Kasserine.

Yet there is another side to Kasserine. It can be found in a number of places, including the small cultural centre set up by the dancer and choreographer Walid Kadri in a plain residential house. Kadri wants to combat the widespread resignation and open up different horizons for young people. His project is not without its risks. After all, jihadists regard dancing and music as dangerous aberrations that must be stamped out.

Another attempt to create hope in this region so troubled by unemployment, poverty and terrorism comes from Swiss development and co-operation projects. An office with several local employees works mainly on improving the water supply in poor villages in the environs of Kasserine. There are also a few businesspeople there who want to carry on, despite all the difficulties. Mohamed Rachdi Bannani is one of them. He processes cactus pears, which are abundant in the region, into preserves and cosmetic products. His business is located directly at the foot of the Chambi Mountains; the entire area is a military no-go zone.

As we drive away from Kasserine, the mountains are bathed in the warm light of the strong spring sun. Nothing here indicates the massacre that has taken place or the presence of al-Qaida at the gates of Europe. A dozen vehicles stand motionless at a crossroads. Their drivers, we learn, are treating themselves to an after-work beer outside the city.

Charting his own descent into extremism, former Moroccan jihadist Adil El Hasani reveals how he was ultimately able to extricate himself from the grasp of those peddling religious ... END_OF_DOCUMENT_TOKEN_TO_BE_REPLACED

The history of Jews and Muslims is far more entangled than you might imagine – but you have to listen out for it. In "Recording History", Christopher Silver takes us on a sonic ... END_OF_DOCUMENT_TOKEN_TO_BE_REPLACED

Welcome to the world of Al Qasar, where Arabic music collides head-on with punk and psychedelic to create something powerful and beautiful. "Who Are We" is a raucous, subversive ... END_OF_DOCUMENT_TOKEN_TO_BE_REPLACED

A conflict rooted in identity is currently gaining traction in Morocco. It began with demands to relieve the "burden" of Fusha (classical Arabic) by implementing a linguistic ' ... END_OF_DOCUMENT_TOKEN_TO_BE_REPLACED

The Women's Africa Cup this year in Morocco was a resounding success. The Moroccan team was the first Arab women's football team to qualify for a World Cup. By John Duerden END_OF_DOCUMENT_TOKEN_TO_BE_REPLACED

The southern shores of the Mediterranean Sea are losing sand faster than almost anywhere else. The ecological and economic damage is immense. The good news is, there are ways to ... END_OF_DOCUMENT_TOKEN_TO_BE_REPLACED
Author:
Beat Stauffer
Date:
Mail:
Send via mail

END_OF_DOCUMENT_TOKEN_TO_BE_REPLACED
Social media
and networks
Subscribe to our
newsletter