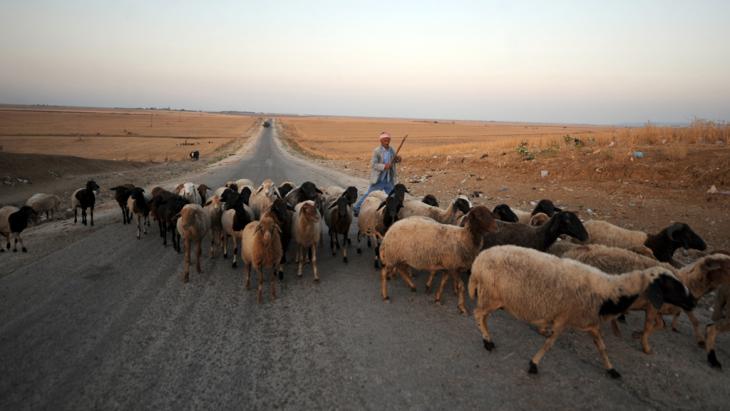 "It′s the first time in the history of Tunisia that the head of a corpse sat in a refrigerator overnight, while the rest of the body lay in the mountains." Uttering these few words Mohammad Soltani informed camera teams about the tragic fate of his brother Mabrouk Soltani. By Iman Hajji

On 13 November 2015, only a few hours before the terrorist attacks in Paris, Mabrouk Soltani, a shepherd boy, was killed in the most gruesome manner at the hand of Islamic terrorists. Mabrouk was 16 years old and lived together with his mother Zaara in the tiny Tunisian village of Slatniya in the Jelma region of central Tunisia (Sidi Bouzid governorate).

The nature-loving teenager would spend the days with his sheep and sheepdogs in the Mghila mountains, only returning home when the sun began to set. On 13 November, Mabrouk and his cousin Chokri Soltani were ambushed and held captive by members of the terrorist organisation "Jund al-Khalifah" (Soldiers of the Caliphate), a splinter group of "al-Qaida in Maghreb" (AQMI) that has pledged loyalty to the Islamic State (IS). From that moment on, the horror was destined to run its course.

The shepherd was beheaded by the terrorists. The 15-year-old Chokri not only witnessed the execution, he was also instructed to bring Mabrouk's severed head back to his family.

In the pay of "Tunisia's tyrants"

Yet this was only the beginning of a horrifying and macabre chain of events. As night fell the search for the rest of his body had to be postponed and Mabrouk's head was left overnight in a refrigerator. No one in authority turned up in Slatniya that evening. The press arrived the following day and took pictures of Mabrouk's head. 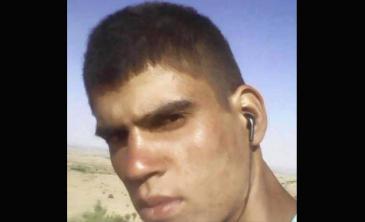 Brutally executed: on 13 November the 16-year-old shepherd boy Mabrouk Soltani was beheaded in front of his cousin by extremists belonging to the terror organisation "Jund al-Khalifah"

The photo not only made the rounds in social networks, but was also shown during a news broadcast by Tunisian state television, resulting in the immediate dismissal of its director. The rest of Mabrouk's body was found 24 hours later, surrounded by his sheepdogs.

Shortly afterwards, a video claiming responsibility was released, which purported to state "the truth about the apostate shepherd Mabrouk." It claimed that Mabrouk had informed the Tunisian army about the presence of Jund al-Khalifah militia in the region. The fate of Mabrouk would be the fate of all those in the pay of "Tunisia's tyrants" and against the ″soldiers of the caliphate″.

The video ended with images of Mabrouk's execution. He was the second shepherd to have fallen victim to terrorism within a month, following the murder on 23 October of a shepherd on Kasserine Mountain in the northwest of the country. Another organisation calling itself "Okbaa Ibn Nafaa," an offshoot of al-Qaida, claimed responsibility for the crime.

Recently Tunisia has increasingly become a target of terrorist attacks. Following the assault on the Bardo Museum last March, in which 22 people were killed and the attack in a hotel in Sousse in June 2015, which resulted in 38 deaths, a further 12 people were killed on 24 November in a suicide attack on a bus carrying presidential guards near Avenue Mohammed V, one of the busiest streets in Tunis.

Tunisia is regarded as a model of successful democratisation in the Arab world. While other countries in North Africa and the Middle East reverted to chaos and dictatorship following the Arab Spring, Tunisia has stood out as an exception. For extremist forces, however, the promising democratic course being followed by the birthplace of the Arabellion is a particular source of irritation. The terrorist attacks therefore aim to destabilise the young democracy. 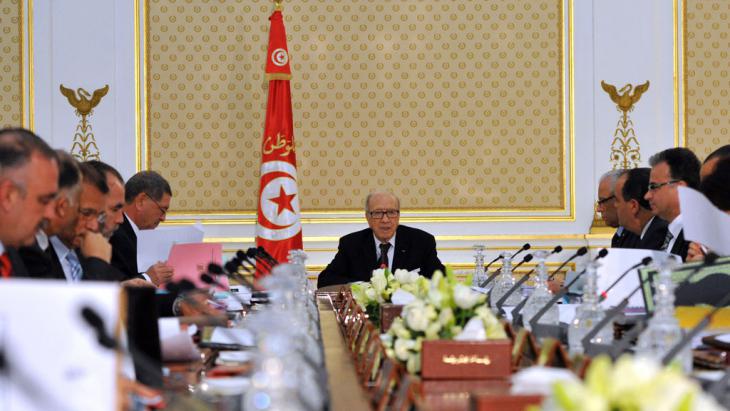 Dramatic loss of face: the current government under the leadership of Beji Caid Essebsi does not seem up to the new challenge posed by the terrorists. Measures to address the threat have been adopted only reluctantly. As a result, the civilian population is losing confidence in the government. Essebsi's authority and standing are now at an all-time low

The Tunisian government appears limited in its ability to counter terrorism. The Islamic "Ennahdha" government has categorically denied the presence of any terrorists in the regions bordering Algeria and Libya. Khaled Tarrouch, former spokesman for the interior ministry, claims that these individuals are not terrorists, but athletes training in the mountains.

For its part, the current government under the leadership of Beji Caid Essebsi does not seem up to the new challenge posed by the terrorists. Measures to address the threat have been adopted only reluctantly. As a result, the civilian population is losing its trust in the government. Essebsi's authority and standing are now at an all-time low.

In a moving testimony, Mabrouk's cousin Nassim Soltani said that the shepherd had already been detained by terrorists last summer. They threatened to execute his entire family should he pass on information about their presence in the mountains.

Ready to take the law into their own hands

Nonetheless, even the terrorists must have been aware that the Tunisian government had long been informed about their existence and activities in the mountain regions. Since the encounter last summer, Mabrouk's family has been living in constant fear. 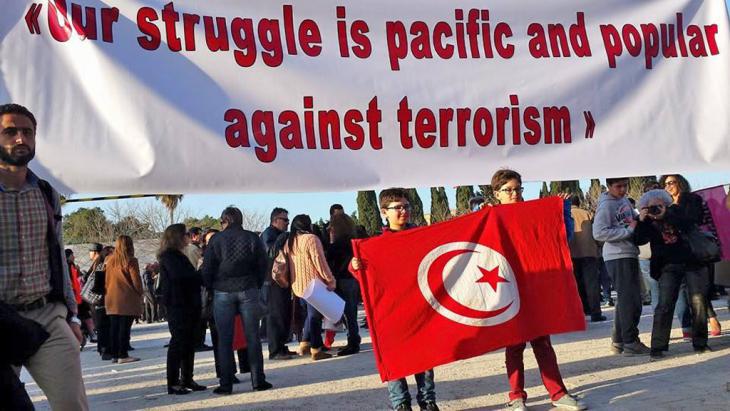 United against terrorism: last March IS attacked the Bardo Museum in Tunis, in June a beach and a hotel in Sousse. Sixty people died. The terrorists are seeking to undermine the democratic process and Tunisia′s tourism industry

As Nassim astutely explains, "My father told me we should move away, but that if we moved and let the terrorists take over the village, they would then expand their control across the country. When people abandon the next village in the face of approaching terrorism, the terrorists will only extend their grip further, until someday they take over the whole country."

Nassim points to the crushing poverty and extremely difficult conditions under which his family and other villagers live. Under such poverty, young people with no hope for a better future can easily be "bought" and persuaded to join the terrorists.

"We are now ready to take the law into our own hands," he continues. "We are also prepared to head up into the mountains and to die for the security of our country." He says he doesn't have much choice. Since the terrorists have entrenched themselves in the mountains, he could just as well die of thirst, as he can no longer obtain drinking water from the usual source up in the hills. Or he could starve, because he can no longer collect firewood. Or he could be targeted as a victim by the terrorists.

The Tunisian government has begun building roads for pedestrian and vehicular traffic. This will make the region more accessible and also allow the local population to travel to other areas to earn a living, which has not been possible until now.

Since the murder, Mabrouk's family has experienced considerable support, both from a wide swathe of Tunisian society and from the ″Association Grands Cœurs″ which, in addition to allocating monetary and material donations, also runs specific projects to help the people of the region.

Such help came too late for Mabrouk. He depended on the mountains to survive. Yet survive he did not.

How is one to convey the history of Islamic images of Muhammad freed from today’s polarised politics? What are the challenges and pinch points of this particular academic ... END_OF_DOCUMENT_TOKEN_TO_BE_REPLACED

A Tunisian farmer attaches a machine to a cow's udder and sets the pump whirring, but he only expects to fetch less than half the normal amount of milk amid soaring fodder prices END_OF_DOCUMENT_TOKEN_TO_BE_REPLACED

The book "The Invention of the Maghreb: between Africa and the Middle East" prompts us to review basic terminology. This includes terms that we use almost every day as if they are ... END_OF_DOCUMENT_TOKEN_TO_BE_REPLACED

The term "Tuareg" refers to tribes and nomads who speak dialects of Tuareg and live in Targa, an area in south-west Libya recently renamed Wadi Al-Hayat but previously known as ... END_OF_DOCUMENT_TOKEN_TO_BE_REPLACED

Where are the measures to deal with the looming challenges facing the Arab world? In this commentary, Marwan Muasher warns that the region is in grave danger of falling behind ... END_OF_DOCUMENT_TOKEN_TO_BE_REPLACED
Author:
Iman Hajjih
Date:
Mail:
Send via mail

END_OF_DOCUMENT_TOKEN_TO_BE_REPLACED
Social media
and networks
Subscribe to our
newsletter