The mass media's fondness for clichés is apparent in most reporting on the Israeli-Palestinian conflict. Sometimes it takes a cartoonist to show that not everything is as black-and-white as it seems. The journalist Joe Sacco has created a masterpiece of cartoon reportage: "Palestine". By Petra Tabeling

Grim winter: Joe Sacco is an impeccable observer of life in the occupied territories

​​Israel and Palestine: a never-ending story. Again and again, the media show us the same images, and these often give a very superficial impression of what’s actually happening in the Middle East. We rarely hear how the conflict affects individual people, and seldom are we provided with any background information, especially about the circumstances under which Palestinians (above all) are forced to live. Joe Sacco grew up with American TV, and he gradually became aware that the images flooding into his living room weren’t necessarily telling the whole story. In 1991, the young journalist travelled to Israel and the occupied territories, hoping to gain his own impression of the true situation. In the course of his search for "the other truth", he eventually produced a grand total of nine full-length comics. Now, the publishing house Zweitausendeins has made this work available to a German audience, under the title "Palästina". 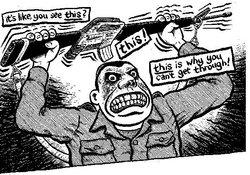 ​​Sacco’s monochrome drawings refuse to present this conflict in the usual black-and-white terms, as a simple battle between Good and Evil. Violent Palestinians? Terror for terror's sake? Sacco meets hundreds of Palestinian people, who tell him of their lives since the beginning of the Intifada. They show him their houses and the world they are forced to live in. They have been traumatised by Israel's military occupation, traumatised by arrests and humiliations in a country where destruction and dispossession are everyday events.

He speaks to Palestinian farmers who require six different permits before they can bring their goods to market; he visits bazaars and refugee camps on the West Bank and listens to the victims of brutal torture: women’s-rights activists, mothers in mourning, teachers, police officers and young people. He describes all this as a completely unknown world; and his narrative approach makes it clear that the things he saw and heard also touched him personally. Though his attitude is distant, sceptical, and sometimes even cynical, Sacco listens attentively to the people he meets – and then he draws them, precisely as they are, and in loving detail. Much more than a demonstration of the author’s immense graphic talent, "Palestine" shows how Sacco came to develop a passionate interest in the people of Palestine and their individual biographies. 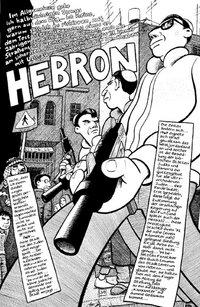 Violence is omnipresent: Joe Sacco tells his story from the Palestinian perspective yet he keeps his critical distance

​​He has cast himself as the unprepossessing hero of the tale, a skinny young guy with pebble specs and black stubbly hair; a traveller without an itinerary, who stumbles almost accidentally into the stories, places and events he depicts and describes.

Though Sacco is one of the first artists to use the comic-book medium to examine real political topics in a fascinating and compelling way, he’s by no means the only one of his kind. In the early 90s, his fellow-American Art Spiegelmann had already won a Pulitzer Prize for "Maus". More recently, the Iranian exile Marjane Satrapi produced "Persepolis", a highly personal depiction of her childhood in Iran, and a beautifully lucid account of political developments in the country before and after the revolution of 1979. With this in mind, some people are already beginning to speak of a new genre: "cartoon journalism". Even as a child, Joe Sacco loved to draw. When he grew up, he studied journalism, realising only gradually that he could use his graphic talent in the service of his chosen profession. In an interview, he described his first job as follows: "two-and-a-half years of boredom in the editorial office of a magazine for notaries."

Edward Said has written a foreword to the German edition of the complete "Palastine" series. He describes Sacco’s work, with its occasionally grotesque exaggerations, as a remarkable counterbalance to the ubiquitous mass media. Said describes Sacco as one who stands up for the poor and downtrodden, seeing his graphic narratives as a confirmation of what has already been written by Amira Hass and other contemporary observers. In Said’s view, Sacco’s comic book is a work of "artistic and political significance and extraordinary creativity." In fact, it was Edward Said’s writings that originally inspired Joe Sacco to undertake his research project. At that time, he could hardly have dreamt that the renowned Palestinian-American writer would one day write a lengthy introduction to the completed book. In 1996, Joe Sacco received the American Book Award for his cartoon reports. These have now, at last, been published in German. Today, during the second Intifada, Sacco’s graphic art has as much to tell us as it did when first published; for in Israel and Palestine, people are still living and suffering under the rule of violence.

END_OF_DOCUMENT_TOKEN_TO_BE_REPLACED
Social media
and networks
Subscribe to our
newsletter