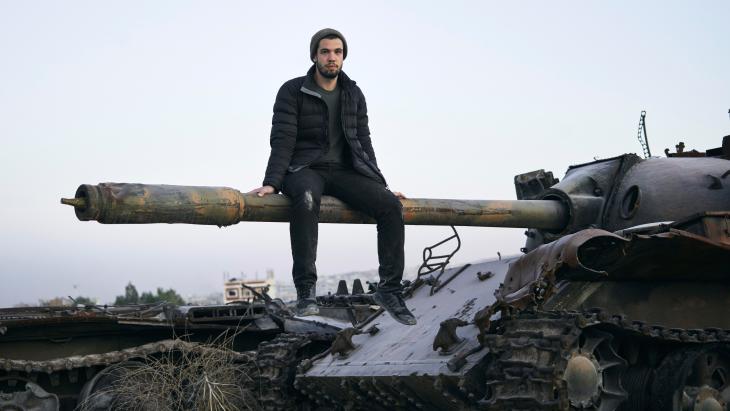 Joey Lawrenceʹs "We came from fire"
A tribute to the Kurds

With its large landscape format and its glossy colour photos, "We Came From Fire" by American-based Canadian photo journalist Joey Lawrence may look like a coffee table book, yet from the sub-title, "Kurdistan's Armed Struggle Against ISIS", to its content, this book is unlike any other. By Richard Marcus

We Came From Fire is divided into two sections: the photographs Lawrence took while travelling with Kurdish fighters in various war zones, primarily Iraq and Syria, and text. The text itself is also subdivided into sections. The first being a detailed history of the Kurds since the end of World War One and how that history ties into both the Arab Spring and the tragic developments that have taken place in Syria and northern Iraq since 2011.

In the second part of the book's text Lawrence shares with us his reasons for wanting to throw himself into a war zone with only his cameras, giving an account of each of his three trips to the region. While the photographs are definitely the highlight of the book, the text is also important. Not only does the well-written history of over a century of Kurds being exploited and betrayed by various powers provide context for the current situation, it also helps us understand the geopolitical realities of the region.

While the Kurdsʹ participation in this conflict has undoubtedly been an effort to further their own goals of reclaiming autonomous control over as much of their traditional territory as possible (Kurdistan stretched from what is now southern Turkey into northern Iran, Iraq and Syria), they were also fulfilling the obligations of their creed: to fight for people in need and defend those under attack. 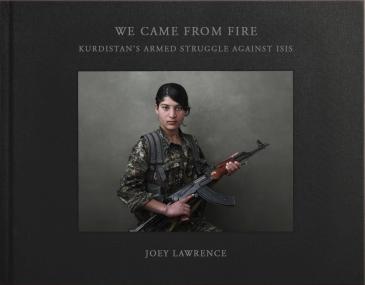 All too human: these are no longer faceless fighters in a far-off land, they're individuals. Joey Lawrenceʹs photos take the impersonal out of war and bring the realities of the conflict home to the reader. "We Came From Fire" provides the world with a unique pictorial and written record of the Kurdish militias and their fight to protect their land

Lawrence's accounts of his three trips to the front embedded with various Kurdish militias are truly fascinating. As we read, we begin to realise the enormity of the task this small and relatively under-equipped force was facing.

When IS fighters began flooding into northern Iraq through the porous Turkish border, the Iraqi army melted away,leaving the Kurds, who not only stemmed the tide, but managed to stage a counter-offensive.

The Kurdish cause – a thorn in everyoneʹs side

Yet, as the photos plainly tell, their fighting ability isn't all that sets them apart. Formed on firm egalitarian principles, the Kurdish peshmerga are both men and women. It must have been particularly galling for the IS fighters, with misogyny such an ingrained part of their philosophy, to have their troops repelled by women.

Unfortunately, as Lawrence informs us, it's not just IS the Kurds had to worry about. Turkey has always considered its own, home-grown Kurdish resistance – the PKK – a terrorist organisation. Which means the Turkish army considers the YPG and Kurdish peshmerga the enemy, even though they all claim to be against IS. While the Kurds were expelling IS from northern Iraq and Syria they were essentially staring down the barrels of Turkish guns just across the border.

The photographs are both stunning and heartrending. The images are a mixture of portraits of individual fighters, or groups of fighters, and pictures taken in the field. While the majority of the latter were taken on patrols, or travelling through areas no longer considered hostile, the situation on the ground was so fluid that there were times when the conflict would find them.

Although the shots of people pulling their lives and houses back together after the Kurds have liberated an area from IS are compelling for what they reveal about people's resiliency and the devastation the war inflicted upon Syria and Iraq, the individual portraits are still the photos that grab our attention over and over again.

Lawrence describes some of the efforts he made to set up 'studios' in various locations to shoot the pictures. While it may sound incongruous to talk of light levels in a war zone, the results make you appreciate the care he took.

Lawrence brings those portrayed to life, makes them all too human. You look at these pictures and you fall in love with the subjects. There's very little of the veiled aggression you'd expect to see in pictures of people in combat gear holding weapons. While they look perfectly comfortable prepared for war, we also see the light in their eyes, the bashful smiles on some of their faces, and the undeniable pride they all share in fighting for their people.

These are no longer faceless fighters in a far-off land, they're individuals. The photos take the impersonal out of war and bring the realities of the conflict home to the reader. While the images are magnificent, at times it is difficult to know whether to curse or bless Lawrence for engraving their faces on our memories.

Not since the Spanish Civil War in the 1930s have there been such poignant pictures from the front lines of a conflict. In We Came From Fire, Joey Lawrence has provided the world with a unique pictorial and written record of the Kurdish militias and their fight to protect their land. This time maybe they won't be betrayed by their allies.

Home
Print
Newsletter
More on this topic
The Kurdish YPG and the future of northeastern Syria: Assad smiles from the sidelinesAssad and the future of northern Syria: Syriaʹs Kurds hold the cards"Islamic State" in Iraq: Beware the jihadist hydraKurds in Iraq: When hope turns to fear
Related Topics
'Islamic State' | IS, Assad regime, Kurdish-Turkish Conflict, Kurds, Minorities in the Muslim world, PKK, Recep Tayyip Erdogan, Syrian Civil War, U.S. policy in the Middle East
All Topics

Iranian author Fariba Vafi is adept at describing everyday scenes and concealing within them something ambiguous, in parts strange and grotesque. She writes novels – which have ... END_OF_DOCUMENT_TOKEN_TO_BE_REPLACED

In her latest exhibition in Japan, Farzaneh Khademian depicts figures who seem detached from their surroundings. In interview with Qantara.de, the Iranian photographer and painter ... END_OF_DOCUMENT_TOKEN_TO_BE_REPLACED

The catastrophic human rights situation in Bahrain is being largely ignored by the rest of the world. Despite all the damning evidence, which includes a Human Rights Watch report ... END_OF_DOCUMENT_TOKEN_TO_BE_REPLACED

Talks to salvage the 2015 Iranian nuclear deal have entered their eighth round in Vienna. Even if a deal is struck and some of the sanctions are lifted, the state of the Iranian ... END_OF_DOCUMENT_TOKEN_TO_BE_REPLACED

Every year in December, the team at Qantara.de takes a look back at the articles that proved most popular with our readers. This year is no different. Here is a run-down of the ... END_OF_DOCUMENT_TOKEN_TO_BE_REPLACED

END_OF_DOCUMENT_TOKEN_TO_BE_REPLACED
Social media
and networks
Subscribe to our
newsletter