The Free Spirit of Al Andalus

As opposed to medieval Europe, the arts in Muslim Spain, were free. Now the album "Siwan" celebrates the music and the spirit of Al Andalus, demonstrating that Islamic civilization is one of the cornerstones of Western culture, as writes Richard Marcus

​​ The common perception most of us have of European history from the fall of the Roman Empire until the fifteenth century is one personified by the title the period is designated as 'The Dark Ages'. It's depicted in our histories as being marked by the spread of the Black Plague, ignorance, and superstition.

It wasn't until the miracle of the Renaissance, which literally means re-birth, that Europeans began to drag themselves out of the mud and started to create beautiful art, renew European culture and rediscover the teachings of the ancients. Reading most standard histories of the time you could get the impression this awakening was somehow spontaneous; one morning people just woke up and looked at the world differently.

The reality is that the ancient knowledge was never really lost and not all of Europe had descended to the same depths of ignorance. In Al Andalus, the area of Spain ruled by Muslims until 1492, the arts and the so-called "lost knowledge" were alive and kicking.

​​ Everything from the concept of zero in mathematics, philosophical concepts of the self which would have seen you burnt at the stake in Christian Europe to the arts and music, thrived in the city states of Cordoba and others through out the region.

Muslims, Christians, and Sephardic Jews lived in relative harmony and there was a free exchange of ideas and learning between scholars of all three faiths. It was from here that the knowledge which fuelled the so called Renaissance trickled into Italy, France, and the rest of Europe.

Much of this cultural heritage was lost when the Spanish Inquisition purged the region of heretics and non-believers by forcing Muslims and Jews to either convert or flee. Those who did neither were burnt. Much of the great poetry and the musical heritage, however, were preserved and passed on.

It's this music that forms the basis for an album being released on ECM Records under the guidance of Norwegian pianist Jon Balke.

Siwan, the title of the disc, is the word for 'balance' in Aljamiado, the Romanic-Arabic hybrid language spoken in medieval Andalusia. The album is a collection of eleven tracks, nine of which feature the work of poets from that region married to music inspired by the era.

The "oldest" song, "Thulathiyat", was written by the Sufi mystic Husayn Mansour Al Hallaj who lived between 857–922 AD while Lope de Vega's "A la dina dana" demonstrates how the influences of the Andalus era lived on after the re-conquest: de Vega lived from 1562–1635 and is considered one of the major voices of the golden age of Spanish literature for his plays and prose.

The booklet accompanying the CD not only gives a history of each song and the poet who wrote it, but their lyrics in the language they are sung in, either Spanish or Arabic, and an English translation.

Jon Balke has an extensive background in both jazz and world music with credits including compositions for theatre, dance, and chamber orchestras. The three other main musicians, vocalist Amina Alaoui, trumpeter Jon Hassell, and violinist Kheir Eddine M'Kachiche each have experience and talent relevant to the work at hand. 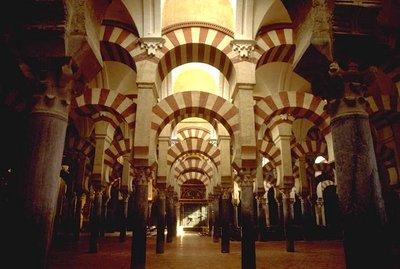 La Mezquita: Cordoba's Mosque, built between 784 and 987, has become a symbol of 'multi-cultural' Al-Andalus

​​ Alaoui and M'Kachiche are Moroccan and Algerian respectively and both have extensive backgrounds in the history and playing of the music of Al Andalus. Jon Hassell's musical experiences have seen him studying compositions from Europe to India and he has created what he calls "fourth world" music – music without borders that combines classical, pop, secular, and sacred elements from all over the world.

With these four serving as the nexus, and the rest of the musicians drawn from traditions and cultures ranging from traditional Persian to early European music like Baroque and Renaissance, everybody involved has had their musical experiences influenced by what was born on the Iberian peninsula.

As for the music itself, it is difficult to find the words to describe it. If you're familiar with any of music from North Africa, Spain, Persia (modern Iran), or Renaissance Europe, then you're bound to recognize elements in each song, no matter what language they are sung in. In fact there are times while listening to various songs that you'll swear you've heard it before as patterns that you've heard in another context will tug at your memory. 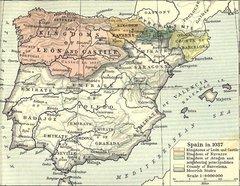 Moorish Spain in 1037: 'Al-Andalus' was the Arabic name given to the parts of the Iberian Peninsula and Septimania governed by Arab and North African Muslims, at various times in the period between 711 and 1492

​​ However, all of the compositions have been created for this recording. What Balke and his fellow musicians have done is compose music which reflects the depth and breadth of the influence Muslim Spain has on us to this day.

It shows, no matter what anybody would have us believe, that Islamic civilization is one of the cornerstones of Western culture, as the philosophy and thought that went into the creation of the music from Al Andalus continues to strike chords of recognition with us today.

The wonder of Amina Alaoui's voice

One of the great wonders of Siwan, aside from the beauty of the music, is the singing of Amina Alaoui. While all the musicians are wonderful, it's around her voice that the nine tracks with lyrics live or die. The more I hear female vocalists from traditions other than North American pop or European opera, the more I realize why I've always felt there has been something lacking in this music. There's nothing forced or controlled about Alaoui's voice like what were used to.

While I've always been able to admire the technical prowess of an opera voice, its lack of human warmth has always left me untouched. Alaoui's voice is every bit as technically proficient as any I've heard sing opera, but she has the humanity they often lack.

Rich like velvet her voice also retains the rawness of human emotion that allows us to identify with her song even though we may not speak or understand the language she's singing in.

Carl Jung talked about the idea of the 'Collective Unconscious' wherein we "remember" things that date back thousands of years, reoccurring in our dreams. While some of that has, according to Jung, been formed by specific forming factors like religion and language, some of it we share in common with all humans.

In some ways the music on Siwan is a part of the 'Collective Unconscious' as you recognize it without actually knowing any of the songs on the disc.

However, what's important is the music on this disc is beautifully sung and wonderfully played. It doesn't matter what you know or don't know about history, or even if you care about cultural references. Listening to this disc is an experience that transcends any of those concerns, proving once again that regardless of what anyone thinks or does, great art exists in a world of its own.

Richard Marcus edits Epic India Magazine, an online arts and culture magazine focusing on South East Asia in general and India specifically, and is a contributing editor at the pop culture site Blogcritics.org. His work has appeared in such diverse places as the German edition of Rolling Stone Magazine and The Bangladesh Star.

New West-Eastern Jazz Divan
A Humanist Consensus for a Multicultural Society
Back in the seventies, when the first experiments bringing Western and Eastern music together in jazz were taking place, musicians trusted in the power of the sounds themselves. Since 9/11, such experiments have taken their orientation from religious, literary and philosophical texts, as Alessandro Topa found out when he listened to three new releases on the ECM label

Interview with Abed Azrié
An Exploration of Contemporary Music and Oriental Heritage
In his latest album "Venessia" the Syrian musician Abed Azrié opens himself once again to a wide range of thematic sources and musical influences. Saleh Diab spoke with the artist, who now lives in Paris

The Poetical Heritage of al-Andalus
"Come, Christian! Our Hearts Are Bound Together"
The period Al-Andalus was largely characterized by the peaceful coexistence of the Jewish, Islamic and Christian cultures, which bore fruit in the field of literature as well. Christoph Leisten reviewed a new publication on Al-Andalus literature

END_OF_DOCUMENT_TOKEN_TO_BE_REPLACED
Social media
and networks
Subscribe to our
newsletter