Short Getaways from the Daily Grind

"Captain Abu Raed" is the first feature-length film from Jordan. The debut film of the Jordanian-American director Amin Matalqa has been awarded numerous international prizes. Martina Sabra had a look at the film

The British-Jordanian actor Nadim Sawalha has appeared in films such as "The Wind and the Lion" and "Syriana". The character of Abu Raed is his first starring role

​​Abu Raed, widowed and in his mid-sixties, lives a fairly routine life. Every day, the quiet, reclusive old man rides the bus to Amman Airport. Once there, and now wearing the blue overalls of a janitor, he pushes his cleaning trolley through the halls, gets down on his knees to scrub the floor despite his age.

The passengers hurrying by mostly regard him with contempt. It doesn't occur to them that the man wearing the blue overalls could be an unusually well-read and sophisticated person.

"I wanted to create a modern, Jordanian version of the 'perpetual tramp'," says the Jordanian/American director Amin Matalqa, who was born in Amman in 1976 and attended the American Film Institute in Los Angeles, about the protagonist in his film "Captain Abu Raed".

The character of Abu Raed – successfully cast with Jordanian/British actor Nadim Sawalha – sometimes actually reminds us of Charlie Chaplin's most well-known character. Both are distinguished by a big heart, devotion and humour, but also melancholy, even up to their quiet despair with life.

Not only are Abu Raed's workdays full of drudgery; his evenings are also characterised by blandness. Daily life in his quarter on the citadel hill of Amman is characterised by poverty, violence and hopelessness. 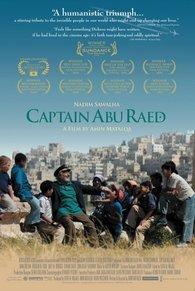 "Captain Abu Raed" won the audience award at the 2008 Sundance Festival, one of the most important festivals for independent film

​​In the apartment below Raed's, the jobless neighbour (believably portrayed by Ghandi Saber) regularly terrorises and abuses his wife (Dina Ra'ad-Yaghnam) in a drunken stupor. Most of the children living in the quarter have a very limited chance of finishing school for they are forced to work to support their families from a young age.

In this dull environment, there is not much that can draw Abu Raed out of his indolence. Apart from reading – the bookshelves in his small flat are stacked with thousands of books – it is mainly the breath-taking view from his balcony that can sometimes animate the bearded old man with the bleary but still lively eyes.

Drinking a cup of tea and gazing at the old city centre and onto Amman's ancient Roman theatre, Abu Raed's thoughts turn to his former life; he holds a quiet, secret dialogue with his dead wife.

A forgotten pilot's cap as a lifesaver

Otherwise, Abu Raed is filled with resignation more than anything else – until one day a seemingly banal event tears him from his familiar daily grind.

Rana Sultan plays the pilot Nour, who feels pressured by her family, particularly her father

​​One day Abu finds a forgotten pilot's cap and returns home wearing it. A young boy from the neighbourhood takes him for a pilot. The news spreads like wildfire, and the next day a good dozen boys and girls collect in front of Abu Raed's door, wanting to know all about the life of a pilot.

At first Abu Raed hesitates, but then he lets himself be carried along by the children's enthusiasm. Every day he sits with them and recounts tales from faraway places, lets them take part in his experiences of Paris and New York, Greece and India – countries he has never been to himself, but only knows from books.

Paradoxically, the flights of fancy and the fondness of the children, who respectfully refer to him as Captain Abu Raed, lead the old man to eventually become more interested in real people. He starts to look after the son of his violent neighbour and tries to protect him; using a great number of tricks, he attempts to prevent another young neighbourhood boy from going to work, motivating him to go to school instead.

​​And eventually, Abu Raed becomes friendly with a young woman at the airport. The 30-year-old pilot Nour (Rana Sultan) isn't poor, but she feels ostracised because she refuses to let her father marry her off. As an outsider, she feels drawn to Abu Raed.

A very tender father-daughter-like relationship develops between the two misfits, which, right at the end, still gives the viewers a feeling of hope, despite the many setbacks.

Amin Matalqa tells his Arabic version of the "'perpetual tramp" in very well thought-out, peaceful images and with a rhythm that is so dense and well-composed that the film never feels bogged down. This definitely has to do with the fact that Matalqa – in contrast with many other Arabic directors – not only studied directing, but is also a professional screenwriter.

Winner of the Sundance audience prize and the first Jordanian film nominated for an Oscar.

Notable is also the precision with which Matalqa captures the various milieus of the Jordanian capital city – from the interiors to the linguistic codes, the gestures and the movements.

But the most impressive aspect is Matalqa's ability to depict complex, contradictory emotions; although mercilessly sentimental, the plot never turns into kitsch. Rather, the film precisely captures the attitude that the people of Amman have towards life: torn between a sometimes almost caustic sobriety and the deep longing for a bit of craziness and a wisp of poetry from time to time, which makes the daily grind more bearable.

Interview with Bader Ben Hirsi
"I Wanted to Make a Film Which People Everywhere Would Understand"
The London-based filmmaker Bader Ben Hirsi has made the first Yemeni feature film ever. "A new day in old Sana'a" has been awarded several prizes, among them the Silver Falcon at the Sixth Arab Film Festival in Rotterdam. He spoke there to Larissa Bender

Interview with Kasim Abid
"You Cannot Risk Your Life to Make a Film"
In 2004, the Iraqi filmmaker Kasim Abid returned to his native Iraq and started the Independent Film and Television College in Baghdad. But despite notable successes, the college had had to move to Damascus. Interview by Abdul-Ahmad Rashid

Mahmoud Kaabour's "Being Osama"
What's in a Name?
"Being Osama" is a close observation of the Arab-Canadian community in the aftermath of 9/11, told by six of its members who share the name 'Osama'. In this interview, director Mahmoud Kaabour talks about how 9/11 affected tolerance in Canada

END_OF_DOCUMENT_TOKEN_TO_BE_REPLACED
Social media
and networks
Subscribe to our
newsletter