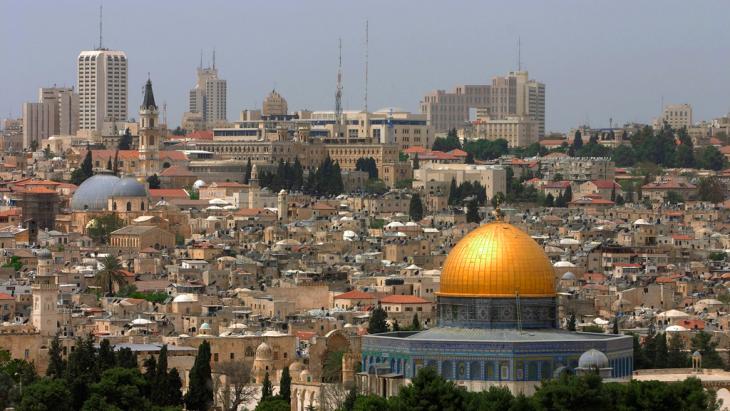 Jordi Savall and Montserrat Figueras, both world renowned specialists in early music, have produced an album that explores musical traditions from Jerusalem's various epochs: the Jewish, the Christian, the Arab and the Ottoman eras. Lewis Gropp introduces the intercultural musical project 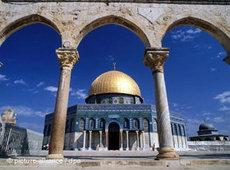 Jerusalem is a central point of reference for Islam, Judaism and Christianity. Pictured: the Dome of the Rock on the Temple Mount, an Islamic shrine constructed over the site of the Second Jewish Temple

​​ The city of Jerusalem is a central point of reference for the three great monotheist faiths. King David made the city the political and religious capital of the United Kingdom of Israel and Judah, thus creating a centre of Judaism within and beyond the country.

Jerusalem is a holy city for Christians as the place of Jesus of Nazareth's passion, crucifixion and resurrection.

It was here too that the first community of early Christians proclaimed their religion. And for Muslims, the city is traditionally the third most holy in Islam after Mecca and Medina. Before they prayed facing the Kaaba in Mecca, Muslims even directed their prayers towards Jerusalem for around a year.

Bearing the seed of peace in its name

In the course of its approximately 4000-year history, the city has been destroyed, looted and pillaged some 40 times. Today's Jerusalem is a symbol of the irreconcilability of opposing peoples and contradicting claims to religious influence. And yet this city bears the seed of peace in its name. 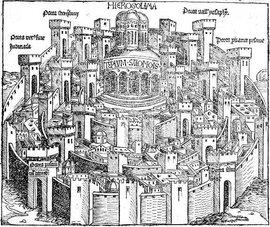 The Christian Kingdom of Jerusalem was established in 1099 after the First Crusade. It lasted from 1099 until 1291. Pictured: Hartmann Schedel's woodcut 'Hierosolima' (Jerusalem), Nuremberg, 1493

​​ The Hebrew word 'Jerusalem' can be interpreted to mean city of two peaces, referring to the earthly and heavenly peace heralded by the Old Testament prophets. The etymologically observant will recognise the Hebrew shalom in the name – and thus also the related Arabic salaam. Starting from this idea, the specialists in early music Jordi Savall and Montserrat Figueras have produced an unusual musical project – Jérsualem: La Ville des deux Paix.

On this double album, the two of them explore musical traditions from Jerusalem's various epochs: the Jewish, the Christian, the Arabic and the Ottoman eras. A 400-page book detailing the historical and musical background accompanies the CDs; all texts are printed in English, Arabic, Hebrew, French, Spanish, Catalan, German and Italian.

For the dialogue-centred Jerusalem project, Jordi Savall and Montserrat Figueras – UNESCO Artists for Peace in 2008 – brought together Jewish, Muslim and Christian musicians from all the countries that have left traces on Jerusalem's musical traditions over the centuries: Israel, Palestine, Greece, Syria, Armenia, Turkey, England, France, Spain and Italy. 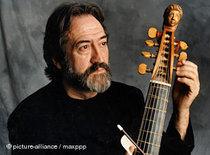 ​​ The section on the "Jewish city" begins with its foundation and ends with the destruction of the Temple in the year 70 CE. It is presented through a selection of the most beautiful psalms of King David as preserved in the ancient tradition of the Jews of southern Morocco, along with a piece on Rabbi Akiba, one of the most important fathers of rabbinical Judaism. The Christian chapter embarks with the arrival of Queen Helena in the year 326 and ends in 1244. It opens with a Stavrotheotokia, a dark, meditative hymn to the Virgin Mary attributed to Emperor Leo VI (886-912).

The following piece is Pope Urban II's First call to the Crusade (1095), recited in French to the sound of fanfares and military drums. The chapter closes with a quiet, humble improvisation on the hymn Pax in nomine Domini ("Peace in the name of the Lord!"). This final piece in the section recalls the Battle of Gaza, where the Egyptian Ayyubids inflicted a painful defeat upon the crusaders and their Syrian allies in 1244.

The astutely compiled album is a musical reflection of the cornerstones in the history of the Holy Land. Among other pieces, a sung version of Sura 17 of the Qur'an, describing the Prophet Mohammed's ascent to heaven from the Temple Mount, presents Jerusalem as an Arabic city (1244-1516). [[{"fid":"8362","view_mode":"large","type":"media","attributes":{"height":"256","width":"180","alt":"cover "Jerusalém" (source: Alica Vox)","title":"cover "Jerusalém" (source: Alica Vox)","class":"media-element file-large image-left"}}]]​​ Now almost forgotten, Jerusalem's Ottoman period lasted precisely 400 years – from 1517 to 1917. The album includes a retelling of Süleyman the Magnificent's dream, recited in Turkish to the strings of an oud, and a triumphant Ottoman warrior's march from the 16th century – albeit performed in a cultivated style of high musicality and tonal refinement.

The chapter on the "city of pilgrimage" also bears testimony to all three monotheist religions. The opening piece gives us Ibn Battuta, the eminent Moroccan traveller and scholar (ca. 1304-1377), enthusing over the legendary beauty of the gold-crowned Dome of the Rock.

The team have also set texts by Jehuda ben Shmuel ha-Levi to music, the Sephardic rabbi, doctor, philosopher and poet from Saragossa in Muslim Spain. Alfonso X, called "Alfonso the Wise", the king of Castile and León (1221-1284), is also represented with a piece from the largest collection of medieval songs, the Cantiga de Santa María.

The album's most dramatic document is a historic recording by Shlomo Katz, a Jew of Romanian origin. Before Katz was to be executed in Auschwitz in 1941 he asked for permission to sing the hymn El male rahamim (God full of compassion). Deeply moved by the magnificence, emotional depth and intensity of the music, the Nazi officer on duty allowed Shlomo Katz to escape.

In 1950 Katz recorded the song as a lasting testament and hymn to the victims of Auschwitz. Exuding a moving sense of tragedy and grace in itself, the piece becomes a devastating musical document in the knowledge of its history. Jordi Savall's and Montserrat Figueras' "Jérusalem: La Ville des deux Paix" is an astutely compiled mosaic of cultures. Every song, every set of lyrics forms a possible starting point for exploring the dramatic and chequered history of the medieval Occident and Orient and the points they have in common.

"Music," writes Jordi Savall of the project, "becomes the indispensable means of achieving a genuine intercultural dialogue between human beings from very different nations and religions, but who nevertheless share a common language of music, spirituality and beauty."

This text was previously published on Common Ground News Service in a slightly shortened version.

Conceived by Israeli journalist and rabbi Elhanan Miller, "People of the Book" is a YouTube project designed to provide information on Judaism in Arabic. Disarming prejudice with ... END_OF_DOCUMENT_TOKEN_TO_BE_REPLACED

While Palestinian political concerns are largely ignored these days, Palestinian band of the moment 47Soul is taking the Middle East's music scene by storm. By Daniel Bax END_OF_DOCUMENT_TOKEN_TO_BE_REPLACED

Berlin's "House of One" project, instigated by Jews, Christians and Muslims, will finally begin to take physical shape in early 2021, following a lengthy period of preparation. ... END_OF_DOCUMENT_TOKEN_TO_BE_REPLACED

END_OF_DOCUMENT_TOKEN_TO_BE_REPLACED
Social media
and networks
Subscribe to our
newsletter