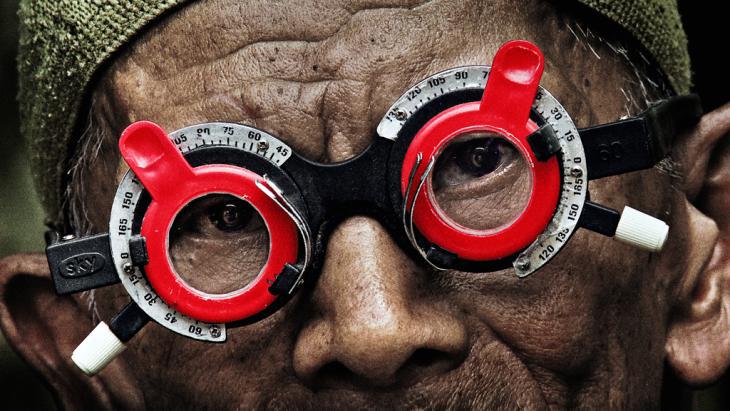 "I expected to meet monsters"

In "The Look of Silence", a man in Indonesia meets the men who murdered his brother, men who are still in positions of power. In conversation with Simon Broll, US film director Joshua Oppenheimer explains that his work aims to break through the trauma

An old man is wearing red-framed optometry glasses in his garden. A younger man tests his eyesight while crickets chirp in the background. The filmmaker Joshua Oppenheimer captures this meditative moment in "The Look of Silence." But nothing is harmonious in this scene: The old man, Inong, was part of the Indonesian paramilitary group "Pancasila" as a youth. The younger one, Adi, lost a brother - and Inong was his murderer. In 1965 General Suharto led an anti-communist purge that killed between 500,000 to 1.5 million people. Today, many of the former murderers live in a state of impunity. Oscar-nominated film director Joshua Oppenheimer's latest documentary deals with this ongoing process of grief and reconciliation.

Mr. Oppenheimer, your film "The Look of Silence" brings together a murderer and the brother of a victim. Wasn't this dangerous?

Joshua Oppenheimer: When Adi, my main protagonist, first told me that he wanted to confront the perpetrators, I said no. No, because it's too dangerous and because the perpetrators are still in power. But I saw that this could help Indonesians to understand how urgently truth and reconciliation and some form of justice is needed. And I realized I could make that meeting happen, because I was well known across that whole region. 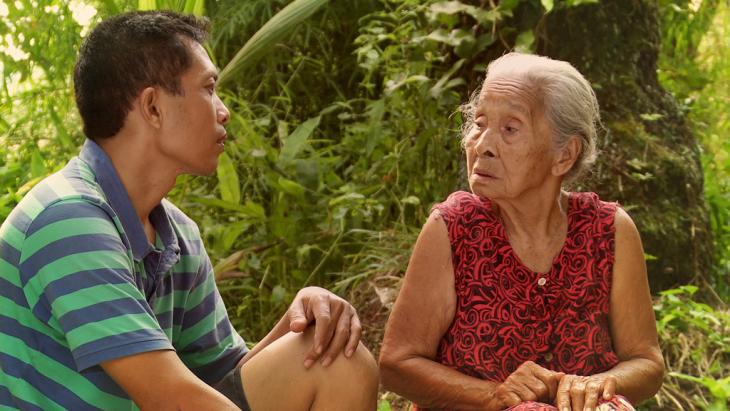 Shadows of the past: "What is it like for you to live surrounded by the murderers of your son?" Adi asks his mother. In the documentary film "The Look of Silence" he attempts to understand the killing of his brother during the Suharto military dictatorship

You had previously shot the film "The Act of Killing," where you followed former members of the Pancasila Youth.

Oppenheimer: The film hadn't been screened yet. I was famous not only for making this film but for having made it with the most powerful perpetrators in the country. And it was clear that the men Adi wanted to confront, men who were regionally but not nationally powerful, would think that I was close to their highest-ranking commanders. And that in turn would mean that the commanders would be reluctant to physically attack us. They wouldn't want the commanders to say: How could you attack Joshua Oppenheimer? He's our friend.

Why a second film about the mass killings?

You focus on one farmer's family. Why this selective hyperbolizing?

Oppenheimer: You can extrapolate from all the stories of these different survivors a general experience. An experience that can dishonour the singular pain is also grace of this one family. I'm trying to make the viewer feel immersed in their body: What would it be like to live as a survivor in fear for 50 years. What is it like for Rohani, Adi's mother, to have to send their sons and daughters to school to be taught by the very men who killed their first son?

You achieve this with poetic imagery and moments of silence. Why did you choose this approach?

Oppenheimer: It captures very precisely the traces of 50 years of fear and silence. The wrinkles on Rohani's brow, the play of water as it splashes down the skin of Adi's 103-year-old father's side as he's being bathed, the knot in Adi's throat as he witnesses his mother's pain. This, I felt, would allow Adi to become you or your own brother, Rohani to become your mother. And then the whole film would not be a window into some far off world that you don't really care about or some far off phenomena that you need to understand through the lens of journalism or history. But it would be more a mirror in which you can see yourself and your own humanity.

Just as in the film "The Act of Killing", mass murderers retain a human face. Wasn't this difficult, considering the deaths they are responsible for?

Oppenheimer: I expected to meet monsters. And then I kept finding only human beings whose daily interactions with their families were like mine. When they boast about their crimes, it's not pride. It is insecurity. We're like birds that puff up our feathers to look bigger than we are. I recognized that what these men are doing is very understandable. They're haunted by horrific memories, nightmares, and unspeakable acts. And they're doing what you and I would do: to try to sugarcoat these bitter rotten memories with the sweet language of a victor's history to swallow down their own past.

Your films are about memory or the suppression of memory. How important is revisiting the past?

Oppenheimer: Again and again in the film, we hear survivors say: Let the past be past. But they always say it out of fear. And the perpetrators say: Let the past be past. They always say it as a threat. This means that the past isn't past. It's there, it's threatening, and it's ruining other people's lives. It's keeping people traumatized. And the suggestion in the film is that we can never run away from our past because the past will catch up to us. Not even that. The past is us.

You yourself come from a Jewish family. Some of your relatives were killed during the Third Reich. To what extent is this a factor?

Oppenheimer: When I first came to Indonesia and sensed the fear of the people, I had the terrible feeling it was as if I had come to Germany only 40 years after the Holocaust just to find the Nazis still in power, or if the rest of the world had celebrated the Holocaust while it took place. And then I understood that similar massacres had also taken place across the southern hemisphere. That this is not some crazy science fiction scenario, but that things like this are the order of the day. And when I recognized this, I realized, I must stop everything else and dedicate myself to making this film.

Why do you think the world celebrated the genocide? 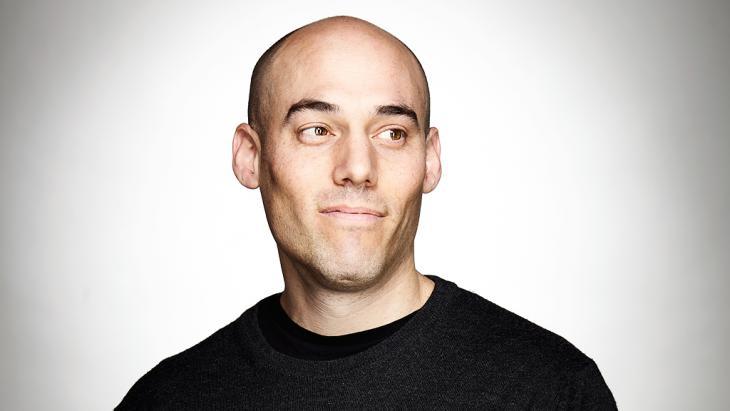 Film director Joshua Oppenheimer: "When I first came to Indonesia and sensed the fear of the people, I had the terrible feeling it was as if I had come to Germany only 40 years after the Holocaust just to find the Nazis still in power, or if the rest of the world had celebrated the Holocaust while it took place. And then I understood that similar massacres had also taken place across the southern hemisphere"

Oppenheimer: The western world celebrated the Indonesian genocide and considered it good news because the victims were accused of being leftists and supportive of the Communist party.

So, the genocide was instrumentalized during the Cold War?

Oppenheimer: There's a very important clip in the film from America's NBC, one of the major television networks in the United States. It's shot in 1967, just two years after the killings. We hear an American journalist, basically reporting the events of 1965 as good news. His report said that Bali was now more beautiful without the Communists. And there was no critical response from the broadcaster.

Is this the reason why you as US citizen are striving towards reconciliation? "The Look of Silence" has been screened 3,500 times in Indonesia. Both movies have sparked debate.

The murderers refuse to regret their deeds in the movie. Only one daughter apologizes in the name of her father. Hope for reconciliation lies in the next generation then?

Oppenheimer: The scene with the daughter is one of the most beautiful delicate things I've ever seen. It's a kind of moment where a woman finds out that her father is not the hero that she always hoped he was. And instead of panicking, instead of getting angry, she listens to her conscience. I think this scene is tremendously important. The girl provides an example in the film: Many ordinary Indonesian viewers will come from perpetrators' families. I think it's the only real change we can hope for. It's in the younger generation and depends on people like Adi or that daughter, who can actually reach across the chasm that divides them and come together.

In his documentary films, 40-year-old US film director Joshua Oppenheimer repeatedly deals with the history of Indonesia. His work "The Act of Killing" was nominated for an Oscar, the next film "The Look of Silence" was awarded the Grand Jury Prize in Venice in 2014

Water buffalo and oxen have been part of the work in Indonesian fields for centuries. But the draught animals are no strangers to sport either, as can be seen in two traditional ... END_OF_DOCUMENT_TOKEN_TO_BE_REPLACED

According to the latest Reuters tally, more than 2.54 million people are now reported to have been infected by the novel coronavirus globally and 177,004 have died. As Muslims ... END_OF_DOCUMENT_TOKEN_TO_BE_REPLACED

Around the Islamic world, lockdowns and curfews are being extended and religious ceremonies are being cancelled outright in the hope of slowing the spread of COVID-19. Here’s the ... END_OF_DOCUMENT_TOKEN_TO_BE_REPLACED

While some are beginning to protest the lockdown, others are unable to bury their loved ones in accordance with Islam. Here’s the latest from across the region END_OF_DOCUMENT_TOKEN_TO_BE_REPLACED

Coronavirus continues unabated. Iran remains a hub of infection, war-torn Syria has recorded its first case and Yemen is bracing itself for the worst. Here’s the latest from ... END_OF_DOCUMENT_TOKEN_TO_BE_REPLACED

As COVID-19 sweeps across the globe, it is forcing religions to adapt and take action to prevent infection. But experts warn against using the crisis to fuel conspiracy theories. ... END_OF_DOCUMENT_TOKEN_TO_BE_REPLACED
Author:
Simon Broll
Date:
Mail:
Send via mail

END_OF_DOCUMENT_TOKEN_TO_BE_REPLACED
Social media
and networks
Subscribe to our
newsletter