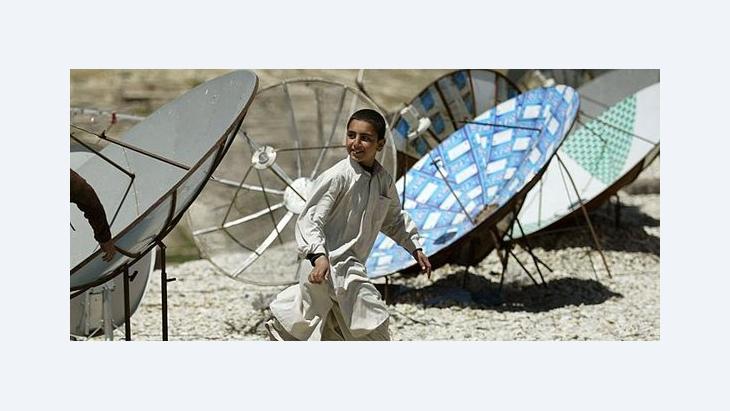 ﻿Journalism in Afghanistan has been reborn, rising from the ashes of the Taliban regime. The country currently boasts 150 radio stations and 30 television channels. But how free is its journalism? And how much independence do the journalists have? By Marian Brehmer

A decade ago when Taliban rule was brought to an end, the first stirrings of new media life began to reanimate the corpse of the Afghan media.

Now, after ten years, despite the fact that it is appropriate to not to boast about the humble achievements of the international military presence – the resurrection of the press is a dynamic process involving contributions from many committed media people all over the country. Afghanistan even managed to rank well ahead of its neighbours, Pakistan and Iran, on the 2010 press freedom index published by "Reporters without Borders".

Prior to 2001, the country's only radio was the appropriately named Voice of Sharia; now, however, there are 150 different stations. With high rates of illiteracy, and consequently low circulation levels for print media, radio is the most widely distributed mode of communication in Afghanistan. 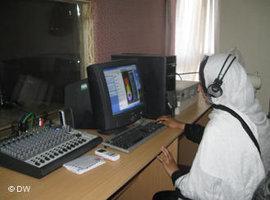 Traditional structures within the wider field of journalism still make it difficult for females to work in that field. Under the Taliban rule, however, women had been forbidden from working at all

​​Humaira Habib is head of the local, female-run, radio station in Herat, Radio Sahar, a station that also provides education on social issues. "Sahar" means dawn. And, indeed, a new dawn it was in 2003, when Radio Sahar went on air for the very first time. For years women had been forbidden from working; confined to the home.

Radio Sahar has always supported women, though traditional structures within the wider field of journalism still make it difficult for females to make it their career. Many families are against their daughters deciding to take up journalism, as it is not considered to be a suitable choice for a woman.

Any sort of normality in the job is also impossible due to the security situation. "In Herat, women are limited to working in the editorial office only. It is just too dangerous for us to work out in the province," Habib explained in a talk at a German-Afghan media seminar a few weeks ago in Bonn, an event organised by VENRO, the umbrella for non-governmental development organisations in Germany, and the Journalists Network, an organisation for the country's young journalists.

Journalists in Afghanistan have more than just the Taliban to worry about. There are also the Afghan warlords, the militia leaders who rose to power and wealth during the war against the Soviet Union and are now specialised in a whole range of criminal activities, including heavy involvement in the lucrative drug trade. They have even moved into broadcasting. The influential warlord and general, Abdul Raschid Dostum, for instance, is the owner of the Ayna TV channel. 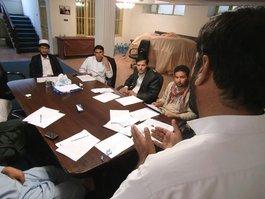 Journalists in Afghanistan have more than just the Taliban to worry about: There are also the warlords who run half of the country's 30 TV channels

​​They are very powerful figures in the current Afghan media world. "Half of the 30 TV channels in Afghanistan are run by warlords," says Danish Karokhel, head of the private Pajhwok news agency and recipient of a Committee to Protect Journalists' Press Freedom Award.

Danish is no stranger to war. His father was killed in the Soviet war when he was just seven years old. The seemingly endless series of conflicts in Afghanistan drove him into exile in Pakistan, but the desire to become a journalist remained a passion he never lost.

Pajhwok supplies news to most of the media in Afghanistan and has built a reputation for reliability and quality. But Karokhel's work is anything but straightforward. "Reliable information is often difficult to come by, and that makes research difficult," he says. He gives the example of a terrorist attack.

How is one supposed to find out about the number of casualties? Any questions addressed to the government tend not to be answered; only the Taliban are quick to respond. "A call comes into our office, a figure is mentioned, and usually it is much too high," he says.

The ISAF (International Security Assistance Force) is no better when it comes to information policy. In Karokhel's opinion, the foreign troops are just as likely to manipulate figures as the Taliban are. The ISAF will often attempt to suppress the numbers of civilian casualties after military strikes. 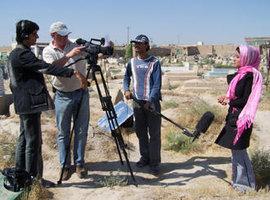 Against all odds: Despite the depressing security situation, Afghanistan managed to rank well ahead of its neighbours, Pakistan and Iran, on the 2010 press freedom index published by "Reporters without Borders"

​​"They tell us that the attack was carried out by the Taliban," says Karokhel, indicating that he feels that it is the fight for the truth that has been one of the bitterest of struggles in the Afghan conflict.

Karokhel has already lost three of his colleagues – one killed by the Taliban, one by warlords, and one by NATO. It is a stark reminder of just how dangerous life is for Afghan journalists and from how many sides they are constantly under pressure.

A weekly newspaper for the Mullahs?

Insurgent attacks have only one objective. "They want to destroy our human capital," says Shahir Zahine, head of the Kilid media group, in a booming bass voice. As far as he is concerned the press in his country is still in its infancy. "The most effective medium of communication in Afghanistan is still the Friday prayers of the mullahs," says Zahine. He has even given consideration to the idea of starting up a weekly newspaper for the mullahs.

There is also a great deal of self-censorship among the journalists, with conservative social sensibilities determining what may be written about and what not. Then there is the question of money. It is something that the survival of high-quality media in the country depends on, and it is often in short supply. And, when it comes down to it, can any medium financed by a warlord ever really be independent? A reliable press law and proper training schools for journalists are also still lacking.

Enayat Najafizada from Masar-i-Scharif, at 23 the youngest Afghan journalist in Bonn, remains confident. "The passion among the new Afghan journalists is fantastic. I see a good future ahead for us," he says. It is better not to ask his opinion of the Bonn Foreign Ministers Conference on Afghanistan, however. For him, it is first and foremost simply a big show.

His colleagues at the meeting in Bonn, too, are highly sceptical about the likelihood of anything of substance emerging that could have any real affect on the way things are in their home country.

Home
Print
Newsletter
More on this topic
Journalism in Afghanistan: ''The Media Can Change Everything''Journalists in Afghanistan under Duress: Is Karzai Sacrificing the Freedom of the Press?
Related Topics
Democracy and civil society, Freedom of the press, Human rights, Jihadism | Jihadists, Taliban, Women in the Islamic world
All Topics

In India and beyond, there has been great sadness at the loss of the renowned Reuters photographer Danish Siddiqui, whose images captured the human face of South Asian news. He ... END_OF_DOCUMENT_TOKEN_TO_BE_REPLACED

For nearly 20 years, Bagram was the headquarters of U.S. forces in Afghanistan. Since the spring, the base has been cleared. What remains is a pile of rubbish. ... END_OF_DOCUMENT_TOKEN_TO_BE_REPLACED

I regret very much that I worked for the Bundeswehr. If the Taliban knock on my door, I hope they shoot me right away. Guest article by Ahmad Jawid Sultani END_OF_DOCUMENT_TOKEN_TO_BE_REPLACED

Almost all NATO troops have withdrawn from Afghanistan. Turkey is looking to fill the gap and is offering itself as a new protective power. But the Taliban are sending clear ... END_OF_DOCUMENT_TOKEN_TO_BE_REPLACED

During their 1996-2001 rule, the Taliban outlawed dozens of activities in Afghanistan. Now, with the insurgents once more making huge territorial gains across the country ... END_OF_DOCUMENT_TOKEN_TO_BE_REPLACED

The West is pulling out of Afghanistan after 20 years, but the conflict remains – and the Taliban are stronger than they have been for a long time. And now? The renowned Taliban ... END_OF_DOCUMENT_TOKEN_TO_BE_REPLACED
Author:
Marian Brehmer
Date:
Mail:
Send via mail

END_OF_DOCUMENT_TOKEN_TO_BE_REPLACED
Social media
and networks
Subscribe to our
newsletter