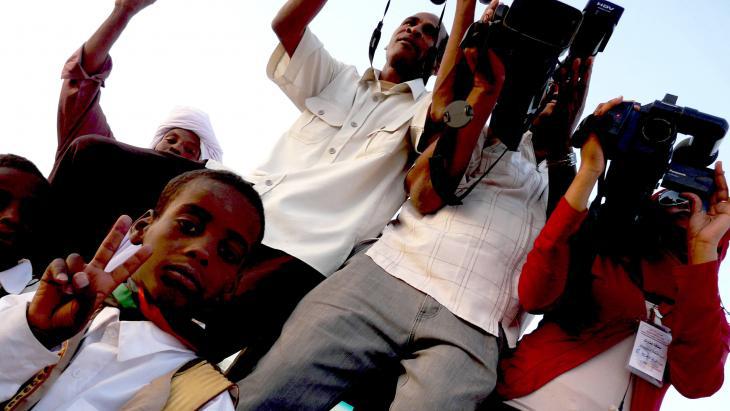 Caught in the crossfire

As their country slides into a fully fledged civil war, an increasing number of Libyans are seeking shelter abroad. Among them are many journalists who are perceived as being representatives of opposing political forces and are increasingly coming under fire. By Valerie Stocker in Tunis

"They blindfolded and hit me, accusing me of many things: that I am against the revolution, a secular, a liberal, an atheist …They said they would rape and slaughter me," says Salah Ingab, recounting his abduction in Tripoli.

Ingab, a political opinion-writer and publisher of a magazine, was recently held for several hours by men he thinks were acting on behalf of those currently in control of the Libyan capital. "They want to send a message to the activists – leave the city – and to society – calm down, don't move. And this is the exact message they told me to tell the other activists when they decided to release me."

His is not an exceptional case. The organisation Reporters Without Borders has registered seven assassinations, 37 abductions and 127 attacks against journalists in Libya since 2011. Three years after the fall of Muammar al-Gaddafi, the North African nation finds itself in a dead-end situation.

The former dictator left a power vacuum from which two main political camps emerged: one was Islamist-leaning and the other more secular. Their leaders managed to form broad alliances among the tribes, towns and militias, turning all of Libya into a battlefield. As the transition stagnates, the hatemongers among Libya's still inexperienced politicians are shaping public discourse, accusing each other of being either hardline Islamists or Azlam, remnants of the Gaddafi regime.

People are already recalling the hopeful atmosphere that reigned back in late 2011 with nostalgia. After four decades of autocracy, Libyans enthusiastically welcomed the freedom of expression and press freedom they had called for in the revolution. "Previously there were no private channels, only Gaddafi-TV," recalls Abdelhamid al-Amruni, a journalist from Benghazi. Like him, many Libyan journalists learned their profession "on the frontlines".

Newspapers, online magazines, radio and TV channels sprang up like mushrooms, providing a forum for heated debates on the future of the country. 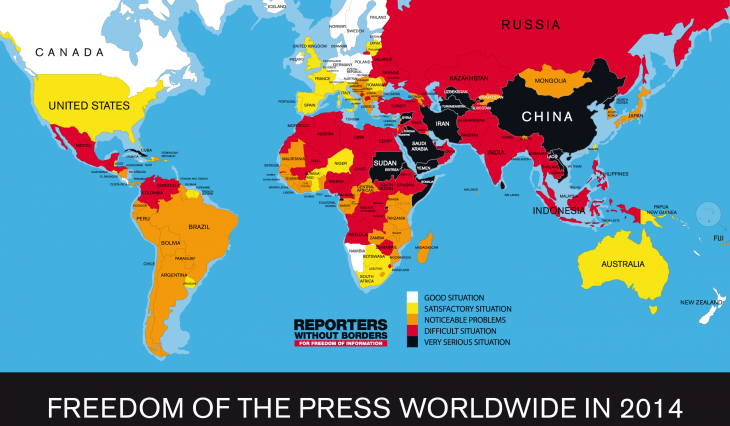 Bleak outlook for journalists in Libya: according to Reporters Without Borders' World Press Freedom Index 2014, Libya ranks 137th out of 180 states. "The polarisation in the Libyan media has intensified since May and entails increasing violence", said Barbara Neault, Libya researcher at the organisation, in Tunis in early November. "Dozens of journalists have left Libya since and many seek our assistance"

But the lack of distinction between social networks and media makes it difficult to assess the veracity of reports and to tell objective news from opinion articles. One particularly problematic aspect is the amalgamation of news and propaganda that results from a situation in which politicians and warlords set up their own broadcasting companies and try to discredit those of their rivals in every way possible. Armed gangs now regularly raid TV studios and abduct editors in reaction to controversial reports.

Events have accelerated since the start of the year. In May, ex-General Khalifa Haftar launched an offensive (known as "Operation Dignity") in Benghazi against a militia coalition spearheaded by the radical Islamist group Ansar al-Sharia.

In August, an alliance of Islamist revolutionary forces dominated by the port city of Misrata and known as Fajr Libya ("Libya Dawn") took control of the capital and formed its own government. Meanwhile, the new parliament that was elected this summer and is recognised by the international community has withdrawn to the town of Tobruk, 1,000 kilometres east of Tripoli, waiting for Haftar to win the battle.

Fault lines in the media landscape

Mirroring the political lines of division in the country, each news source is perceived as either Islamist revolutionary or secular reactionary. Khairi Ibrahim in Tripoli is all too familiar with this problem. He is a reporter for the private TV channel al-Nabaa, which was founded by a well-known former member of the Islamist opposition to Gaddafi and is now seen as the mouthpiece of "Libya Dawn". "My colleagues and I try to deconstruct prejudices through balanced reporting, but there is a lot of wrong information about our channel, which makes our field work dangerous," he says. "Previously, the channel was present in all of Libya, now it is pretty much limited to the western region. The current crisis made many journalists quit their job."

"The situation differs in western and eastern Libya," explains Abdelhamid al-Amruni. "In the western region, there are many more but minor attacks, while in Benghazi and Derna, there is a greater risk of a deadly ending." Journalists are not only increasingly being caught in the line of fire of rival groups, they are also receiving threats. Amruni, who was no exception in this respect, did not want to take any chances. "On Facebook someone called 'Zorro Benghazi' sent me photos of myself, and a warning: 'don't make any more comments about Ansar al-Sharia!' Then my car was smashed. I knew I had to leave." 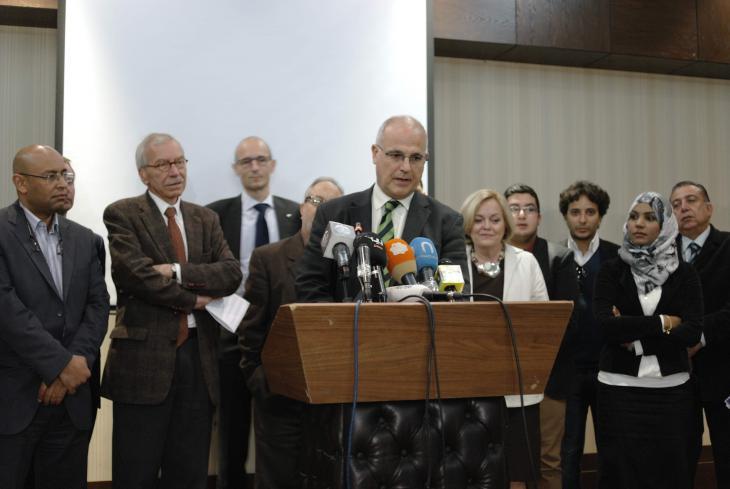 Journalists under fire: in recent months, activists and observers have been warning of growing restrictions on press freedom in Libyan media at a number of events such as the meeting of Libyan media representatives and diplomats from EU states and the UN Mission in February 2014 (pictured here). At the podium is Michael Aron, British ambassador to Libya. Since then, declining security has led to the departure of most diplomats

Salah Ingab also speaks of the difference between eastern and western Libya: "Those who kidnapped me were not radicals. If Ansar al-Sharia caught me I would never get out. It's political, not religious. Because I am against the Muslim Brotherhood and a well-known activist."

Nevertheless, Ingab believes his release was a matter of luck. He left his wife and child with his parents and moved into a student residence, but eventually he decided that it would be safer to go to Tunisia. "If my life depends on a coalition between two cities, what happens if this coalition collapses?"

"You will cost only one bullet"

His kidnappers had warned him that his name would be registered at all border crossings: "If you try to leave, you will cost only one bullet." But once again, he was lucky. "The border official that morning was a distant relative. He said 'OK, God bless you' and stamped my passport."

Even before the current crisis, there were signs of growing restrictions in freedom of expression in Libya. In February, Amnesty International warned that Gaddafi-era laws were being consolidated for this very purpose, such as Article 195 of the Penal Code, which makes insulting the legislative, executive or judicial authorities and the symbols of the state a crime, as well as "any activities hostile to the 17 February Revolution".

Those parts of Libya that are firmly under the control of either political camp risk seeing a progressive synchronisation of the local media. The most recent sign of this came in the form of a letter from the Foreign Ministry in Tripoli (currently controlled by "Libya Dawn") to a correspondent of the French news channel France24.

In a thinly veiled threat, the letter accuses her of biased reporting and warns of the "reactions of many outraged citizens". Among other things, officials took offence at the fact that she did not call the ruling body in Tripoli the "National Salvation Government".

Home
Print
Newsletter
More on this topic
Reporters Without Borders' World Press Freedom Index 2014New media and democratisation in the Arab World: No pedestal for Facebook and TwitterThe Arab Spring and the media: Distorted imagesClashes between rival militias in Libya: The battle for TripoliPower struggle in Libya: A permanent state of chaos
Related Topics
Freedom of the press, Jihadism | Jihadists, Libya after Gaddafi, Media in the Arab World
All Topics

War was ever a man's game. In Libya, where political rivals have been fighting it out for years, the needs of women have all too often been overlooked. Yet the country is going to ... END_OF_DOCUMENT_TOKEN_TO_BE_REPLACED

Dubbed the "Butcher of Hama", Syria's Rifaat al-Assad is accused of embezzling millions in European real estate. Like him, many regional rulers have preferred to keep their ... END_OF_DOCUMENT_TOKEN_TO_BE_REPLACED

According to the latest Reuters tally, more than 2.54 million people are now reported to have been infected by the novel coronavirus globally and 177,004 have died. As Muslims ... END_OF_DOCUMENT_TOKEN_TO_BE_REPLACED

Despite his main focus being on his childhood and youth, spent between East and West, Riad Sattouf also describes the current state of the Arab world in his much-lauded graphic ... END_OF_DOCUMENT_TOKEN_TO_BE_REPLACED

Around the Islamic world, lockdowns and curfews are being extended and religious ceremonies are being cancelled outright in the hope of slowing the spread of COVID-19. Here’s the ... END_OF_DOCUMENT_TOKEN_TO_BE_REPLACED

While some are beginning to protest the lockdown, others are unable to bury their loved ones in accordance with Islam. Here’s the latest from across the region END_OF_DOCUMENT_TOKEN_TO_BE_REPLACED
Author:
Valerie Stocker
Date:
Mail:
Send via mail

END_OF_DOCUMENT_TOKEN_TO_BE_REPLACED
Social media
and networks
Subscribe to our
newsletter