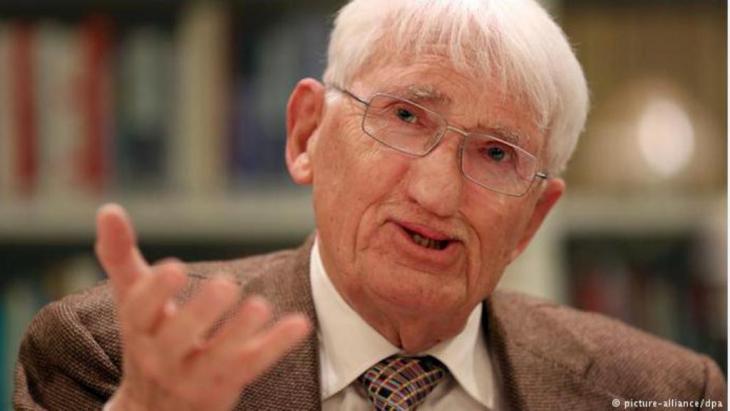 ″Asylum is a human right″

What holds society together and what's our role in it? Philosophers Juergen Habermas and Charles Taylor have recently been honoured in the US for their work on these issues. By Klaus Kraemer and Stefan Reccius

The modern world is forever changing and nothing is constant. It is the unreliability of our time that philosophers Juergen Habermas and Charles Taylor have intensively pondered. For their work, they were presented with the Kluge Prize for Philosophy on Tuesday evening (29.09.2015) in Washington, DC.

"I am of course very happy about this award, which I am the first German to receive," Habermas confessed ahead of the awards ceremony. "It makes me think about what we can attribute to our relationship with the US. For my generation, America was an eminent influence after the end of World War II - not only politically, but also culturally."

In the mid-1960s, Habermas was a visiting professor at a number of American universities. For him, the Kluge Prize brings him full circle regarding his ties to the US. "Both professionally and personally, I've met many friends. Typically, your closest colleagues are at home. But in the US I have just as many impressive colleagues from whom I've learned quite a lot."

The John W. Kluge Center at the Library of Congress in Washington, DC, has awarded the Kluge Prize since 2003 to intellectuals active in fields that are not recognised by the Nobel Prize. Past winners have included Indian historian Romila Thapar, French philosopher Paul Ricoeur and Brazil's former President Fernando Henrique Cardoso. The prize is endowed with $1.5 million. This year, the prize money is split between two winners: Juergen Habermas and Charles Taylor.

The origins of the prize go back to eastern Germany - to the small city of Chemnitz to be exact. John K. Kluge was born there as Johann Kluge and was the son of an engineer. After his father was killed in World War I, his mother married a German-American and moved with him to Detroit. Johann's name was changed to John. 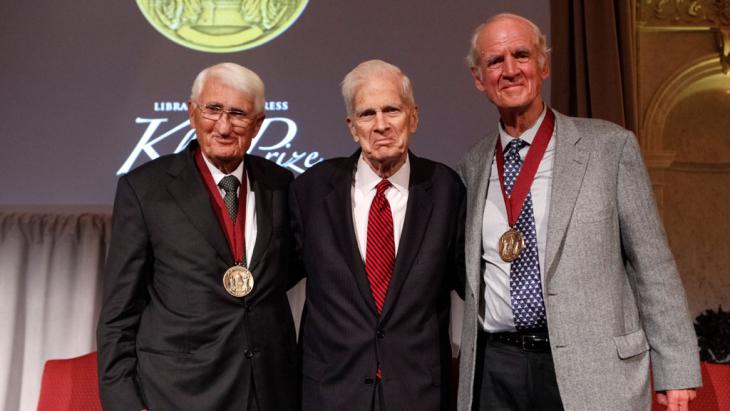 Kluge got a job selling shoes and worked his way up. He later invested his money in the food industry and media companies. Numerous television and radio broadcasters belonged to his company, Metromedia - part of which was later bought up by Rupert Murdoch. In the 1990s, Kluge became a patron. In 2000, a decade before his death, he donated $60 million to the Library of Congress, the official state research library in the American capital.

Habermas and his theory of communicative action

Born in Dusseldorf in 1929, Habermas studied in Gottingen and Bonn. Starting in 1956, he was active at the Frankfurt Institute for Social Research, a left-leaning think tank that inspired the civil protests of 1968. Habermas' life's work has focused on the public sphere, where, according to the philosopher, reason-based communication takes place that holds society together.

Canadian philosopher Charles Taylor, 84, who shares this year's prize with Habermas, goes one step further and maintains that not only communication, but active participation is what binds individuals in a social network. In our anchorless modern era, Taylor says that our identity is determined through our interactions with others.

The theories of both philosophers have brought an in-depth understanding of the individual and our social connections, according to James H. Billington, the head librarian at the Library of Congress. Billington also praised the two for their political and moral perspectives, saying they had philosophical depth.

In 1975, Charles Taylor made a name for himself with an 800-page work on German philosopher Georg Wilhelm Friedrich Hegel (1770-1831). Nevertheless, he managed to make topics like self-determination, freedom, spirituality and the connection between science and humanities accessible to non-experts, according to Billington. Taylor is active in public life in Canada and has run multiple times for political office, representing the New Democratic Party, though he's never won.

Refugees: praise for the German government

At 86, Habermas is still an active participant in public discourse. In an interview with Stefan Reccius in Washington, DC, he commented on the current refugee crisis in Europe.

"The right to asylum is a human right and everyone who applies for political asylum should be treated fairly and, if appropriate, be taken in with all of the associated consequences," said Habermas. In Europe, the situation had been ignored until now, he added. 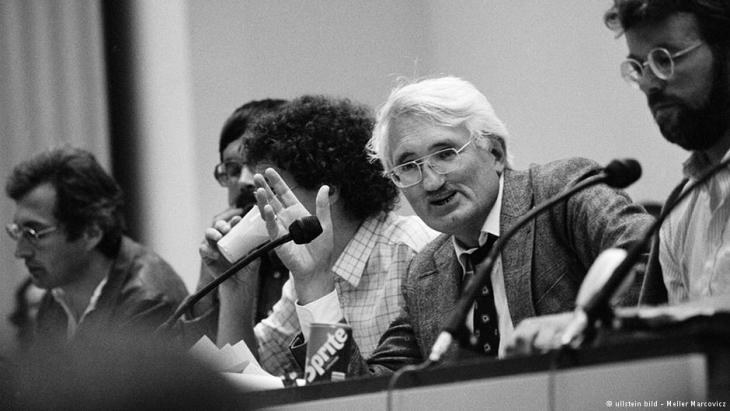 It has long been necessary for Germany and France to develop a common European stance that leads to co-operation in refugee policies, according to Habermas. Though he has often been critical of the German government, he says he currently takes a positive view of Germany's approach, "For a long time I haven't been as satisfied with the government in Germany, as I have been since the end of September."

Philosopher Theodor Adorno once said he wasn't afraid of the ivory tower and that intellectuals needed to distance themselves and find refuge. Habermas worked under Adorno at the Frankfurt Institute for Social Research, but left that ivory tower frequently to get involved in the daily business of politics.

In 1999, Habermas defended the controversial NATO mission to Kosovo with the words, "When there is no other way, democratic neighbours must rush to provide emergency aid according to international law."

Regarding the Assad regime in Syria, Habermas says he doesn't have to think long to reach the same conclusion. "The military interventions in Iraq, Afghanistan, but also in Mali and Libya, have shown that the intervention powers are not ready to make a long-term commitment, that is, decades of building up state structures in these countries. As a result, we see that the situation in the affected countries usually gets worse rather than better."

Habermas' approval of the NATO mission to Kosovo was conditional - but the public quickly forgot that. "Philosophers are careful," he said.

He will use a portion of his prize money for the award for young philosophers which he has founded at the University of Frankfurt.

In his book "Ground Zero: 9/11 und die Geburt der Gegenwart" (Ground Zero: 9/11 and the Birth of the Present) Islamic scholar Stefan Weidner analyses the consequences of the ... END_OF_DOCUMENT_TOKEN_TO_BE_REPLACED

To Afghans, the name "Panjshir" evokes associations with the Tajik resistance against the Soviets during the 1980s. But the special charm of the province lies in its landscape. ... END_OF_DOCUMENT_TOKEN_TO_BE_REPLACED

The USA and NATO plan to withdraw from Afghanistan by September. The operation is risky, the outcome uncertain. Many Afghans fear civil war. The quake on the Hindu Kush will also ... END_OF_DOCUMENT_TOKEN_TO_BE_REPLACED

Even in times of war and pandemic, refugees are still being deported to Afghanistan. Several deportation flights have taken place in recent weeks alone. Since those affected often ... END_OF_DOCUMENT_TOKEN_TO_BE_REPLACED

The Prophet Muhammad never executed anyone for apostasy, nor encouraged his followers to do so. Nor is criminalising sacrilege based on Islam’s main sacred text, the Koran. In ... END_OF_DOCUMENT_TOKEN_TO_BE_REPLACED
Author:
Stefan Reccius
Date:
Mail:
Send via mail

END_OF_DOCUMENT_TOKEN_TO_BE_REPLACED
Social media
and networks
Subscribe to our
newsletter