"Miral" is perhaps the first western film production that shows a well-balanced, modern Palestinian society as a matter of course, before the expulsion and the destruction of social structures. The film thereby contradicts the western idea of a backward people, writes Irit Neidhardt

​​ A celebration in a wealthy household, an opulently decorated Christmas tree, a large number of guests, an upper middle class setting – Jerusalem, Christmas 1947. This is the opening scene of Julian Schnabel's tour de force through the history of the Israeli-Palestinian conflict. A dignified lifestyle that ends with the foundation of the state of Israel just a few months later and the resulting expulsion of large sections of the Palestinian population, as well several massacres.

Hind Husseini (Hiam Abbas), a member of the well-known Jerusalem Husseini dynasty, encounters a group of newly-orphaned children on the street, children who have lost their parents in the massacre of Deir Yassin, near Jerusalem.

Without further ado and philanthropic in a manner that befits her social status, Husseini takes the children back to the family's city villa and founds an orphanage, the Dar al-Tifl (House of the Child). Because of the Nakba, the Palestinian catastrophe and Israeli independence, the orphanage is quick to expand.

Hind Husseini decides to do something to counter the violence through a good upbringing and education alone, and establishes a school affiliated to the orphanage for girls. The film's message is that this is good, and the only right path to follow. All the people connected to the orphanage are beautiful, incredibly beautiful even. And very good.

Superficially, the story is quickly told: The orphanage is managed by Hind Husseini until her death in 1994, shortly after the signing of the Oslo Accords. "Mama Hind" remains true to her principles and categorically rejects violence even at the height of the armed struggle for liberation – leaving no room for discussion.

Julian Schnabel and Rula Jebreal on the set of "Miral" in Jerusalem. The screenplay was written by Jebreal, based on her novel of the same name

​​During the film's 50-year focus period, which shows only private, never political violence, three generations of women are introduced: Hind Husseini, Nadia (Yasmine al-Masri) and her daughter Miral ("Slumdog Millionaire" star Freida Pinto), all of them from Dar el-Tifl and absolutely gorgeous. Only Fatima (Ruba Blal) is – since planting a bomb – rather unattractive. A flashback shows that she was also good-looking before.

The glassy superficiality of the film is mostly attributable to the screenplay by the Palestinian journalist Rula Jebreal, who lives in Italy, an adaptation of her semi-autobiographical novel "Miral".

The Orientalist view and Marxism

Just as on any polished surface, there are scratches to be found in "Miral". One can look through them onto a second level, which adds something to film's fascination. Julian Schnabel had little knowledge of Palestine before reading Jebreal's novel, and the writer says her perspective was very innocent and genuine. For this reason it is probably a coincidence that Schnabel includes images that for a long time were taboo with respect to Palestine: namely portrayals of the middle and upper classes. 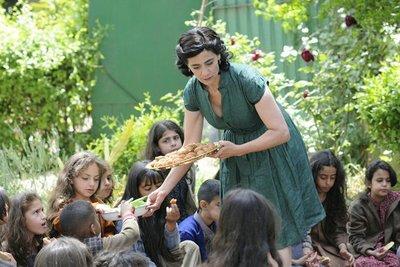 In the name of charity: "Miral" tells the story of Hind Husseini's (Hiam Abbas) efforts to establish an orphanage in Jerusalem after the 1948 partition of Palestine

​​Filmic images of Palestine in works produced or accessible in the West primarily show poor people, refugees, suffering and desperation and convey the impression that Palestinian people are different. One source of this portrayal is a long Occidental tradition of Orientalist views held on the region – a tradition that was consolidated by early photography, especially with regard to Palestine.

With the help of documentary-style pictures taken in the Land of the Bible, the first European photographers aimed to prove that the Holy Scripture was the true word, as a way of refuting Darwin's newly presented theses. Their contrived photos suggest that the place has not changed for two millennia – and the effect of these images continues to resonate to this day.

The second source is Arab: Palestinian filmmaking began as part of the struggle for liberation in the late 1960s, a period that saw the making of numerous cinematic Marxist manifestos the world over. The primary focus of these works was the people, the poor, refugees, the exploited. The films show suffering and desperation and thereby focus more closely on aspects of the conflict that were and still are deliberately denied and concealed by the ruling elite.

The images created by Palestinian film directors are strikingly similar to those of their European colleagues. The difference is that while Arabs witness the pomp of their wealthy classes on a daily basis, this is something that most Europeans are unaware of.

The dictates of the collective

It is the same with respect to the reception of these works. The female Palestinian directors and writers however come from this very same social class, just like most women artists across the world. The last 10 years have seen increasing numbers of Palestinian women starting to make films. 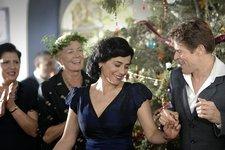 Christmas in Jeruslam in 1947: Julian Schnabel has remarked as an American Jewish person he felt he was the right person to "try to tell the story of the other side"

​​A tendency developed in parallel in the Arab world to relate more personal stories and counter the dictates of the collective with questions about the individual. The female Palestinians made films about their families, thereby bringing the middle classes to the screen. A key factor here is that women's production budgets all over the world tend to be considerably less than those of men, meaning that distribution of their films is far more restricted.

"Miral" is probably the first western production about Palestine that shows the rich as a matter of course, and portrays them before the expulsion and the destruction of social structures. Schnabel and Jebreal went to great lengths to avoid any relation or portrayal of state violence, and create, from a western point of view, a peaceful and optimistic film. They radically break with this logic with the first scenes, which show a well-balanced, modern society and thereby contradict not just the western idea of a backward Palestine, but also the Zionist myth of an empty territory.

Schnabel has published a statement on his film in the German distributor's media brochure. Of his admiration for Hind Husseini he writes: "When she encountered 55 children left in the streets of Jerusalem in 1948, she founded the Dar-Al-Tifl orphanage, and it soon became the home of more than 3,000 homeless girls." His words reveal his enthusiasm for the charitable commitment.

But even in Jerusalem, you don't just find children on the street for no reason, especially not in 1948. Exploding this myth was unlikely to have been the intention of Schnabel and his team, and this was probably just a slip-up.

Irit Neidhardt was born in Germany in 1969 and brought up in Germany and Israel/Palestine; now she based in Berlin. Since 1995 she is teaching and curating in the field of Middle Eastern cinemas. She was teaching at SOAS (School for Oriental and African Studies) in London before founding mec film, a distribution and consultancy company for films exclusively from the Middle East, in 2002.

Muhammad Bakri
A Palestinian's Career in Film
The Palestinian actor and director Muhammad Bakri is well-known internationally. This year he received a Silver Leopard for best actor at the film festival in Locarno for his role in Saverio Costanzo's film "Private." A portrait by Amin Farzanefar

Interview Michel Khleifi
Film as a Political Work of Art
In the summer of 2002, Palestinian director Michel Khleifi and the Israeli director Eyal Sivan traveled along the border determined by UN Resolution 181 in 1947, according to which Palestine was to be divided into two states. From this trip they created a film that will soon be shown in Berlin. Youssef Hijazi spoke with Michel Khleifi

Sari Nusseibeh: A Palestinian Looks Back
The Life of "Others"
Sari Nusseibeh's account of his life in Palestine is a story which goes well beyond the history of the Israeli-Palestinian conflict. Andreas Pflitsch says the book is a multi-faceted portrait of its times

END_OF_DOCUMENT_TOKEN_TO_BE_REPLACED
Social media
and networks
Subscribe to our
newsletter