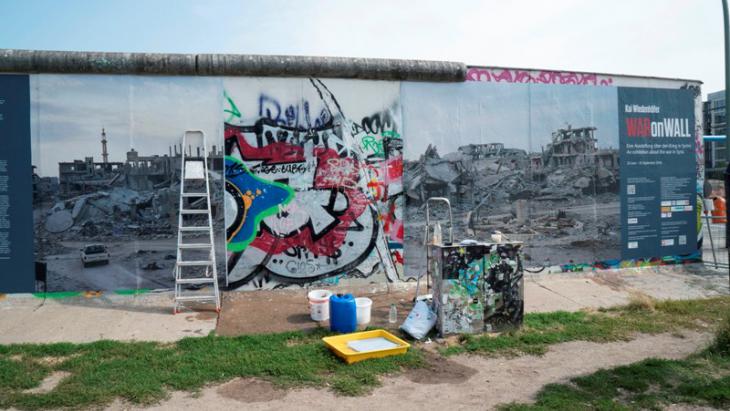 Kai Wiedenhofer′s ″War on Wall″
In your face... and rightly so

With the comprehensive coverage devoted to the latest events in and around Aleppo, the war in Syria is once again astoundingly present in Germany and its media. The urgency of the conflict can be felt most strongly at the moment in Berlin, where the photographer Kai Wiedenhofer has posted his images of the region on the remains of the Berlin Wall. By Felix Koltermann

One of the biggest tourist attractions in Berlin is the so-called East Side Gallery, the contiguous section of the Wall that is still standing and which has been embellished on both sides with colourful graffiti.

The other side – logically known as the West Side Gallery – looks toward the Spree River and frames a small park where large groups of young people like to meet and which is also one of the starting points for excursion boats on the river. This is where documentary photographer Kai Wiedenhofer has realised his latest project, "WarOnWall", with works posted along 360 metres of wall space.

The exhibition consists of three photo series: the portraits in "40 out of one million", the "Kobani" series of panoramic views of the Syrian-Kurdish city and, interspersed in between, found-footage images of a destroyed photo studio in Kobani.

Wiedenhofer took the pictures during several trips to the region between 2013 and 2015. First he travelled to the refugee camps in Jordan to portray victims of the war who had escaped from its horrors. With the series "40 out of one million", the subject of an interview with the artist on Qantara last year, Wiedenhofer wanted to set an example by drawing attention to the enormity of the war's consequences for the civilian population. One example is his portrait of the two sisters Duwa'a and Schahd, whose home was hit by a grenade.

Wiedenhofer then travelled in early 2015 to Kobani in northern Syria. The pictures he took there vividly depict the destruction wrought upon the once-prosperous city by several months of fighting between the Islamic State and the Kurdish militia. This impression is reinforced by the panoramic format of the photographs. Through the juxtaposition of these devastating images with found portraits of the inhabitants of Kobani posing before colourful wallpaper in a local photo studio, viewers to the Berlin open-air exhibition are made painfully aware of the high price exacted by the war.

Utilising the wall and its size

Kai Wiedenhofer wants to confront media consumers with an image of Syria that differs from the one they are used to from the daily reporting, as well as to challenge their accustomed viewing habits. One tool for creating an imposing and at the same time terrifying impression is the enormous size of the images.

"The audience interacts directly with the scenes due to their large size of 3 x 9 metres. They feel like they are part of the events," says Wiedenhofer. This effect can be confirmed by squinting somewhat while observing viewers before a Kobani street scene: you can't help but feel as if you were there.

This is not the first time that Kai Wiedenhofer has presented works at the "West Side Gallery". He already showed his exhibition "WarOnWall"
there three years ago. The symbolism and the substantive relationship between the setting and what was being displayed was easier to grasp in that show, because the images in his project "Confrontier" showed walls and border fences around the world.

Kobani – scene of destruction: Wiedenhofer travelled to the town in northern Syria at the beginning of 2015. The photos he took are shattering proof of the extent of the devastation wreaked on this once prosperous town during the months-long conflict between IS and the Kurdish militias

The starting point was a photograph Wiedenhofer made during the days when the Berlin Wall came down in 1989. The other photos depicted subjects ranging from the border facility between the Turkish and Greek parts of Cyprus and the wall in Israel/Palestine to the border fence between the two Koreas and the American system for enforcing the border with Mexico. Unlike with his last project, this time around he enlisted the help of experts in presenting documentary photography from the Berlin Society for Humanistic Photography.

"Anyone can go; it is much more democratic and open than an exhibition at a gallery or museum," Kai Wiedenhofer says of his choice of location. The exhibition is accessible 24 hours a day. And the audience changes with the hour. Tourist groups come in the morning, families in the afternoon, while in the evening clubbers walk by, or guests of the Mercedes-Benz Arena across the street. This accessibility is what makes for the appeal of an open-air exhibition, but it also entails some risks. In July, the exhibition was repeatedly vandalised. At first, a flag of the "Free Syrian Army" turned up and then someone defaced a portrait by adding the scrawled slogan "Bashar al-Assad best". Each time, Wiedenhofer comes out with a team to repair the damage.

Despite the sensitive nature of an exhibition in the public space, Wiedenhofer made no concessions in terms of content. The records of conversations with Syrian refugees are long and not exactly light reading. Anyone who wants to read through them all will be busy for some time. The most persistent visitors work their way along the entire 360 metres, while others suffice themselves with a selfie in front of the wall. Each person approaches the show according to his own level of interest and powers of comprehension.

The exhibition is on view until 25 September. The images can also be viewed on the project website www.waronwall.org. Two events will be held at the Wall before the end of the exhibition. An accompanying catalogue has been published by Kettler under the title "Syrian Collateral" (ISBN: 978-3-86206-588-2, 25 euros).

Iranian author Fariba Vafi is adept at describing everyday scenes and concealing within them something ambiguous, in parts strange and grotesque. She writes novels – which have ... END_OF_DOCUMENT_TOKEN_TO_BE_REPLACED

Her grandparents are Jews – born in Tunisia and Algeria. Director Cleo Cohen has now broken the silence about this with a very personal debut. By Nadine Wojcik END_OF_DOCUMENT_TOKEN_TO_BE_REPLACED

Life imprisonment for crimes against humanity: that was the sentence handed down to Anwar Raslan in the world's first trial of a member of the Syrian torture system. Matthias von ... END_OF_DOCUMENT_TOKEN_TO_BE_REPLACED

Every year in December, the team at Qantara.de takes a look back at the articles that proved most popular with our readers. This year is no different. Here is a run-down of the ... END_OF_DOCUMENT_TOKEN_TO_BE_REPLACED

With his new album, "A Voice Keeps Calling Me", the Persian santur player Kioomars Musayyebi is building bridges from Iran across the Arab world to European early music. By Stefan ... END_OF_DOCUMENT_TOKEN_TO_BE_REPLACED

Former lawyer Said Haider has invented a chatbot for those seeking advice on anti-discrimination issues – Meta is the first chatbot of its kind in the world. In conversation with ... END_OF_DOCUMENT_TOKEN_TO_BE_REPLACED
Author:
Felix Koltermann
Date:
Mail:
Send via mail

END_OF_DOCUMENT_TOKEN_TO_BE_REPLACED
Social media
and networks
Subscribe to our
newsletter