Liberation through the language of the colonial power

Admittedly, the language upon which survival depends is not the venerable Arabic that Ismael learns in the madrassa. It may be laden with magical ideas and have a fascination of its own, as Daoud communicates convincingly in numerous poetic descriptions, but the boy cannot manage to revivify this old language and make it serve his needs. Then he spots a beautiful woman on the cover of a French crime novel and feels compelled to read the book even though he has never learned French properly.

And in fact, this is the great difference between Kamel Daoud and most of the other Maghrebi authors writing in French: he didn’t grow up with it and had to learn French as a foreign language. For him, therefore, using the former colonial language does not come with the sadness of not having access to Arabic as a literary language, as it does for other writers such as Assia Djebar. Paradoxically, French is a symbol of liberation. 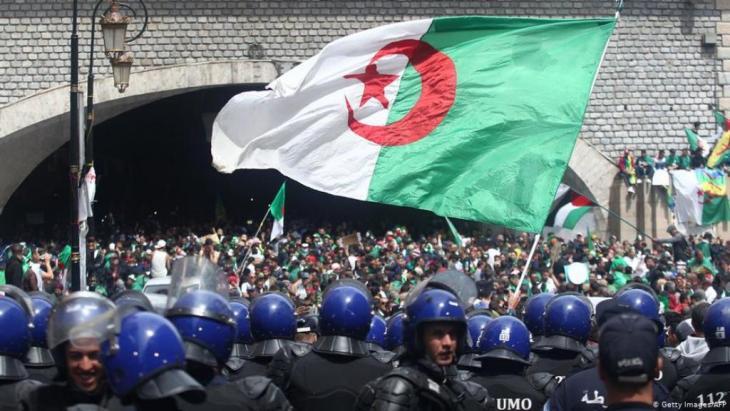 For weeks Algerians have been taking to the streets to protest against the incumbent regime. Long-term president Abdelaziz Bouteflika has already resigned. Nevertheless, the people are still demanding democratic reforms

Ismael imagines himself as a Robinson Crusoe of language, cobbling together meanings from the flotsam and jetsam of words washed up on his desert island. The result is something that only looks like conventional French from the outside. Inwardly, it is filled with a spirit that comes straight from the magical understanding of language seen in the Arabic of the Koran: "There is a link between the conjunction and metaphysics. […] Writing and telling stories is the only way of going back in time, to encounter it, resurrect it or control it."

Once the transfer of this linguistic magic has taken place, French actually performs better than Arabic, or so the narrator discovers. His father still dies at the end just the same, but the patriarchy also dies with him. If a society trapped in tradition no longer has the language to describe what torments them and makes them unfree, then for Ismael, alias Kamel Daoud, French has become the means of expressing it. And that is magic enough!

In spring 2019, now that protests by the Algerian people have forced their elderly patriarch president Bouteflika to step down, you might think that all Algerians have had similar experiences to Kamel Daoud. And of course, he has been called upon to get involved in politics during this transitional phase. But he has said himself that he has decided against it for the time being. And why? If liberation begins with language, then Kamel Daoud has just laid the key to liberation itself in the hands of all his readers.

On the 10th anniversary of the Arab Spring we can’t quite escape that substance called remembrance. Yet, eschewing facile modes of nostalgic remembrance and/or tragic lamentation ... END_OF_DOCUMENT_TOKEN_TO_BE_REPLACED

In her third and most recent novel, Paris-based Algerian author Kaouther Adimi writes almost prophetically about a rebellion by a handful of children against the rigid and ... END_OF_DOCUMENT_TOKEN_TO_BE_REPLACED

Mass protests began in Egypt on 25 January 2011. They triggered the overthrow of long-time ruler Mubarak. Ten years later, many human rights activists and journalists are in ... END_OF_DOCUMENT_TOKEN_TO_BE_REPLACED

Mass protests began in Egypt on 25 January 2011. They triggered the overthrow of long-time ruler Mubarak. Ten years later, many human rights activists and journalists are in ... END_OF_DOCUMENT_TOKEN_TO_BE_REPLACED

The coronavirus pandemic brought mass pro-democracy protests in Algeria to an abrupt end. Exploiting the distraction engendered by the health crisis, the new Algerian government ... END_OF_DOCUMENT_TOKEN_TO_BE_REPLACED

Algeria has not found peace since Abdelaziz Bouteflika, who was president for 20 years, resigned under massive public pressure in April 2019. On 1 November 2020, the government ... END_OF_DOCUMENT_TOKEN_TO_BE_REPLACED
Author:
Stefan Weidner
Date:
Mail:
Send via mail

END_OF_DOCUMENT_TOKEN_TO_BE_REPLACED
Social media
and networks
Subscribe to our
newsletter