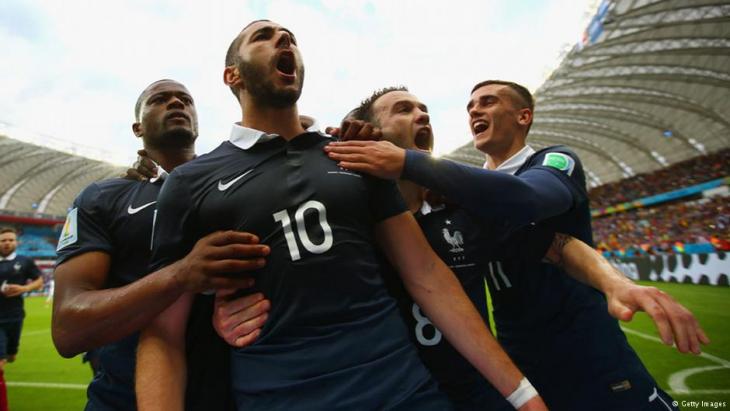 Karim Benzema
The boy next door

There's no place like home – if you ask Karim Benzema, French football's diamond in the rough. He still lives at home with his parents and eight siblings and is loyal to his home team, Olympique Lyon. A portrait by André Tucic

​​Not even Karim Benzema could find a hole in the Rumanian defensive line. Nevertheless, the hopes of the Grande Nation are pinned on this exceptionally gifted player from the ranks of the "Èquipe Tricolore." "France Football" magazine even went so far as to say that the 20-year-old center from Olympique Lyon is "one of the greatest talents French football has ever seen." Even with his help, though, the kickoff match against Rumania yielded only a sobering 0:0 score. There's still no need for the members of the national team to be down, however. Because for one thing there's still plenty of chances to make it to the quarterfinals. And for another, they can count on Karim Benzema, a player who is as good a kicker as David Trezeguet, as fast as Thierry Henry and as hard-boiled as Nicolas Anelka. At least, that's what people are saying about the native Algerian.

The modesty of the Kabyles

Despite the striking differences in their playing styles, goal-getter Benzema is often compared with center-field strategist Zinedine Zidane. And for good reason. Similarities can be found not only on the field, but off it as well – in the two men's background and disposition. Both Benzema and Zidane trace their roots back to Kabylia, one of the poorest regions of Algeria. People from that part of the world are evidently often reserved and modest – at least this cliché seems to fit where Benzema and Zidane are concerned.

Just like football giant Zinedine Zidane, Benzema aka "Big Benz" traces his roots back to Kabylia, one of the poorest regions of Algeria

​​Both try to avoid interviews whenever possible, and when they don't succeed, they prefer to look downward bashfully rather than preening for the camera. For young Benzema especially, all the media attention still takes some getting used to. And instead of answering to its demands, "Big Benz," as his fellow team members like to call him, still prefers to concentrate on family life: "My father and my brothers give me balance; they are what's most important in my everyday life," says the big breadwinner, who despite his high income still lives at home with his eight siblings.

The lightness of being Benzema

The shining light of French football grew up in a concrete wasteland on the outskirts of Lyon, permeated more by dreariness than joie de vivre. When it comes to jobs, the region is an absolute wilderness. All the better from the point of view of Benzema's parents that their talented son was discovered by scouts from Olympique Lyon at the ripe young age of nine. Since then he has been wearing the uniform of his hometown team and has managed to become the U 17 European Champion, win the French Championship four times in a row, pocket three cups and this year earn the title of top scorer with 20 goals to his credit, as well as be named Footballer of the Year.

The French national team for the Euro 2008. Benzema sports number 9

​​That's quite a heap of honors for a 20-year-old. Despite all his success, however, he still hasn't lost his easygoing manner. Off field he usually wears a mischievous grin with a roguish look in his eyes. He's still the friendly boy next door. But when it comes to making goals and scoring points, he turns into a real powerhouse – clenching his fists and gritting his teeth to get the job done. It's not for nothing that a reputation for great determination and ambition precedes him, with rumors of an incredibly tough training program. "I want to improve in all areas, and I still have a lot of work to do. Even if I do shoot a lot of goals these days, I still have to make sure I get the ball in again every time," says Benzema, showing his fighting spirit. He certainly has everything it takes for a world-class striker. He is highly skilled technically and can kick with both feet; he's assertive, calm and collected at the goal, wild and explosive on the flank. And because he is all those things, the usual suspects came onto the scene a few months ago, trying to lure the French-Algerian gem away. But Barcelona, Chelsea and consorts put out their feelers in vain.

Asked about an inquiry from Manchester United, Lyon's President Jean-Michel Aulas growled into the microphone: "We want 60 million euros. And they have to give us Cristiano Ronaldo, too." Anyway, Benzema has no plans to leave the club, and this March extended his contract until 2013. He likes it at home. He has been in the pro squad in Lyon since 2005, although in the first two years he was unable to prevail against the high-caliber competition. Last season, his performance simply exploded, and ever since then "Big Benz" has been shooting goals right, left and center – brutally with his left foot, delicately with his right, powerfully with his head or sneakily in penalty kicks. He's got it down to a fine art. "This championship was special," Benzema remarks, "because for the first time I played from beginning to end." This made the shooting star of French football an interesting candidate for the national team.

After his debut just last year, he is now standing side-by-side as a striker with Thierry Henry, representing "Les bleus" at the European Championship. As a matter of fact, seasoned players like David Trezeguet or Djibril Cisse have stayed home this time around. Because the boy next door is the figurehead for a change of generations, and renewed proof that the integration of immigrants is working in France – at least in football.

The book "The Invention of the Maghreb: between Africa and the Middle East" prompts us to review basic terminology. This includes terms that we use almost every day as if they are ... END_OF_DOCUMENT_TOKEN_TO_BE_REPLACED

Asmaa al-Atawna's debut novel "Missing Picture" has been published in German translation (Keine Luft zum Atmen – Mein Weg in die Freiheit). In it, she describes life in Gaza from ... END_OF_DOCUMENT_TOKEN_TO_BE_REPLACED

Lebanon was long viewed as the Switzerland of the Middle East. Until relatively recently, billions were deposited in its banks. Gulf states were among the foremost investors in ... END_OF_DOCUMENT_TOKEN_TO_BE_REPLACED

To celebrate the bicentenary of the deciphering of the Rosetta Stone, the British Museum is running an exhibition entitled "Hieroglyphs: unlocking ancient Egypt" until February ... END_OF_DOCUMENT_TOKEN_TO_BE_REPLACED

Since Russia invaded Ukraine, Europe has been trying to find alternatives to Russian gas, inevitably zeroing in on the Arab Gulf states. In his commentary, Yemeni politician ... END_OF_DOCUMENT_TOKEN_TO_BE_REPLACED

Nouara may be 65, but she is ready to join thousands of others who burn their ID and pay traffickers for the chance of a new life in Europe. Zineb Bettayeb reports END_OF_DOCUMENT_TOKEN_TO_BE_REPLACED
Author:
André Tucic
Date:
Mail:
Send via mail

END_OF_DOCUMENT_TOKEN_TO_BE_REPLACED
Social media
and networks
Subscribe to our
newsletter