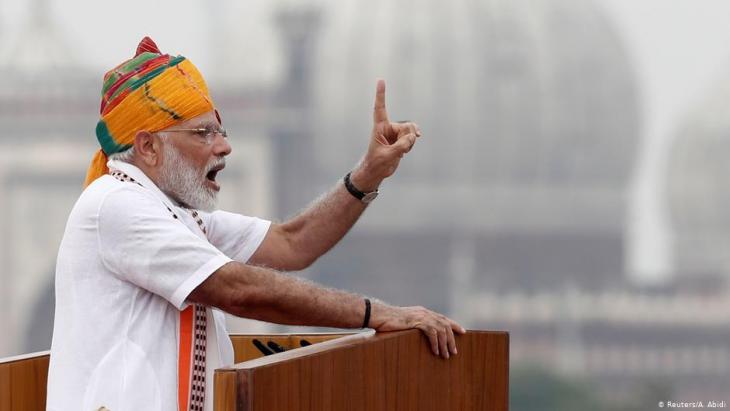 Kashmir, Xinjiang and Arab land in the Middle East
Victims of the civilizational agenda

India's decision to deprive Kashmir of its autonomy, alongside a clampdown in the troubled north-western Chinese province of Xinjiang and US-backed Israeli annexation of Arab land, is the latest indication of what a new world order led by civilizational leaders may look like. By James M. Dorsey

In dealing with recent conflicts, US President Donald J. Trump, Israeli and Indian prime ministers Benyamin Netanyahu and Narendra Modi and Arab and Muslim leaders have put flesh on the skeleton of a new world order that enables civilizational leaders to violate international law with impunity.

It also allows them to cast aside diplomacy and the notion of a nation state as the world has known it since the 1648 Treaty of Westphalia and ignore national, ethnic, minority, religious and human rights.

Fulfilling a long-standing election promise, Narendra Modi's unilateral withdrawal of Kashmir's right to govern itself fits the mould of Donald Trump's unilateral recognition of Israeli annexation of East Jerusalem and the Golan Heights.

The recognition was enabled by Arab and Muslim leaders who have abandoned any pretence of Islamic solidarity and credibility in their increasingly selective lip service to the plight of their ethnic and or religious brethren.

The actions and policies of Messrs Modi, Trump and Netanyahu are those of civilizational leaders who define the borders of their countries in terms of historical claims; representation of a civilization rather than a nation whose frontiers are determined by internationally recognised demarcation, population and language; and rejection of the rights of others.

Recalling the principles of Indian policy in India's first years as an independent state, historian of South Asia William Dalrymple noted how far Modi has moved his country away from the vision of a pluralistic, democratic nation state envisioned by independence activist and first Indian prime minister Jawaharlal Nehru.

"Kashmir is not the property of India or Pakistan, (it) belongs to the Kashmiri people. When Kashmir acceded to India, we made it clear to the leaders of the Kashmiri people that we would ultimately abide by the verdict of their plebiscite. If they tell us to walk out, I would have no hesitation in quitting Kashmir. We have taken the issue to the United Nations and given our word of honour for a peaceful solution. As a great nation, we cannot go back on it," Nehru said in 1952.

Indian polls have shown that as many as two thirds of the residents of the Kashmir valley, one of the world's most militarised regions, want independence.

Modi signalled that he knew that he was playing with fire in what former US president Bill Clinton once dubbed "the most dangerous place in the world." Anticipating that his move would be rejected by India's Muslim community, already on the defensive as a result of Hindu nationalist assaults, Modi sent ten thousand troops to Kashmir in advance of the revocation, detained scores of political leaders, ordered tourists to leave the region, closed schools and shut down telephone lines and the Internet.

To be sure, the timing of Modi's move was likely propelled by Trump's recent offer to mediate the Kashmir dispute that India rejected out of hand and US negotiations with the Taliban that could lead to a US withdrawal from Afghanistan and potentially to a Taliban takeover. Both developments would strengthen India's arch-rival Pakistan.

Nonetheless, Narendra Modi, aided and abetted by like-minded civilizational leaders, has re-defined Nehru's notion of greatness by framing it in terms of Hindu rather than Indian nationalism, an approach that allows him to go back on the promises and legal, political and moral commitments of his predecessors.

So has Benjamin Netanyahu, even if Israel's legal annexation of Arab territory conquered during the 1967 Middle East war was enacted by his predecessors. 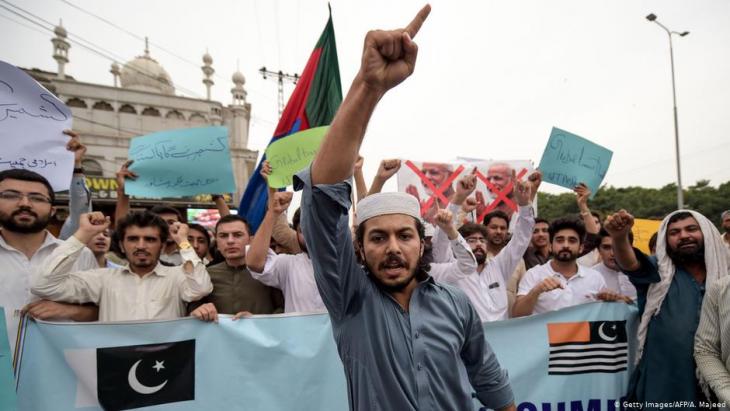 Supporters of an independent Kashmir protest in Peshawar, Pakistan. According to James M. Dorsey, the timing of Modi's revocation of Kashmir's autonomous status "was likely propelled by Trump's recent offer to mediate the Kashmir dispute that India rejected out of hand and US negotiations with the Taliban that could lead to a US withdrawal from Afghanistan and potentially to a Taliban takeover. Both developments would strengthen India's arch-rival Pakistan"

Emboldened by Trump and Xi?

Donald Trump may have emboldened Modi by setting a precedent for violation of international law by recognising Israel's unilateral annexation of East Jerusalem conquered from Jordan and the Golan Heights captured from Syria, as well as de facto endorsing Israeli settlement activity on the West Bank.

Most likely, so did Chinese president Xi Jinping who has been able to ensure that the Muslim world has remained silent and in some cases even endorsed his brutal clampdown on Turkic Muslims in Xinjiang, in what constitutes the most frontal assault on a faith in recent memory.

Civilizational moves in Kashmir, Xinjiang and Israeli-occupied territories risk in the short and/or longer term sparking violent conflict, including a confrontation between nuclear powers India and Pakistan and mass popular unrest.

The moment India eased a government-imposed curfew, thousands of Kashmiris spilled onto the streets to protest against the revocation of self-rule. 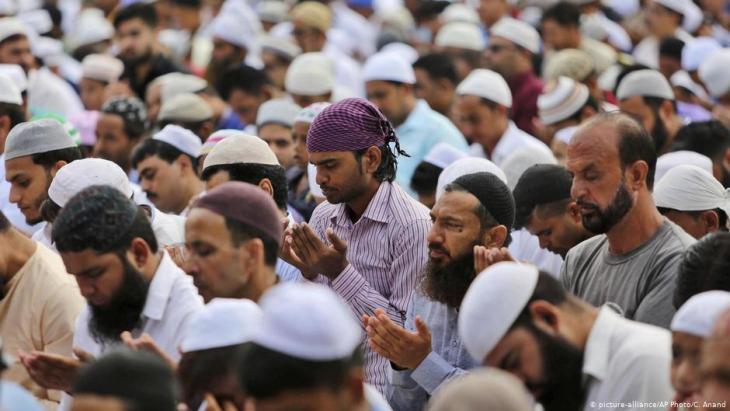 "The moment India eased a government-imposed curfew, thousands of Kashmiris spilled onto the streets to protest against the revocation of self-rule," writes Dorsey. Pictured here: Muslims in Indian-administered Kashmir offered prayers amid the communications clampdown during the festival of Eid-ul-Adha

Varied responses from the Islamic world

Splits in the Islamic world on how to respond to civilizational moves in long-standing disputes involving Muslim communities could prove to be a double-edged sword for Arab and Muslim leaders, who increasingly prioritise what they see as their countries' national interest above Islamic solidarity and the defence of the ummah, the Muslim community of the faithful.

As in the case of Xinjiang and Israeli-occupied Arab territory, Turkey and Malaysia were among the few Muslim nations to publicly criticise the Indian move.

The United Arab Emirates went out on a limb with its ambassador to India describing the revocation of Kashmir's autonomy as an internal Indian matter that would help improve the efficiency and effectiveness of administration and socioeconomic development in the region.

UAE minister of state for foreign affairs Anwar bin Mohammed Gargash subsequently sought to bring the UAE in line with most Muslim states who called for restraint and a peaceful resolution.

The Islamic world's varied responses to multiple crises that target the rights of Muslims suggest not only impotence, but also a growing willingness to sacrifice causes on the altar of perceived national interest and economic advantage.

The question is whether that is an approach that would be popularly endorsed if freedom of expression in many Muslim countries were not severely restricted. The risk is that leaders' inability to gauge public opinion or willingness to ignore it will eventually come back to haunt them.

Dr. James M. Dorsey is a senior fellow at Nanyang Technological University's S. Rajaratnam School of International Studies, an adjunct senior research fellow at the National University of Singapore's Middle East Institute and co-director of the University of Wuerzburg's Institute of Fan Culture

Analyst Iyad El-Baghdadi examines the ongoing tensions between the United States and the two Gulf states – Saudi Arabia and the UAE – and their geopolitical implications in ... END_OF_DOCUMENT_TOKEN_TO_BE_REPLACED

From the Euphrates to the Mekong, dams that ensure one country's water supply risk leaving others parched. But shared water resources can be a source of peace as well as conflict ... END_OF_DOCUMENT_TOKEN_TO_BE_REPLACED

For over fifty years, British photographer Peter Sanders travelled across the Middle East and further afield, seeking out the saints of Islam. His work uncovers a little-known ... END_OF_DOCUMENT_TOKEN_TO_BE_REPLACED

Europe's double standard on refugees, exposed yet again by the war in Ukraine, is morally deaf and geopolitically dumb. Europe can only defend itself by persuading developing and ... END_OF_DOCUMENT_TOKEN_TO_BE_REPLACED
Author:
James M. Dorsey
Date:
Mail:
Send via mail

END_OF_DOCUMENT_TOKEN_TO_BE_REPLACED
Social media
and networks
Subscribe to our
newsletter