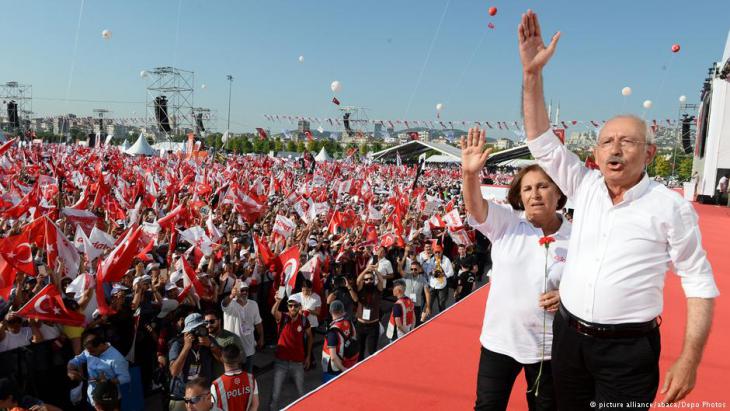 In Turkey, where President Recep Tayyip Erdoğan's government has been working to centralise political power, opposition parties have lately had few reasons to be optimistic. This month's massive rally in Istanbul was a rare exception. By Sinan Ülgen

On 9 July, after walking for 25 days from the capital, Ankara, Turkey's main opposition leader, Kemal Kiliçdaroğlu, urged supporters to resist the decline in democratic freedoms. "We will be breaking down the walls of fear," Kiliçdaroğlu told a crowd of hundreds of thousands. "The last day of our justice march is a new beginning, a new step." The question now is whether Turkey's divided political opposition can move beyond rhetoric and mount a meaningful, unified challenge to Erdoğan's political hegemony.

The party that Kiliçdaroğlu leads, the Republican People's Party (CHP), commands a high level of support from Turks frustrated by Erdoğan's majority rule. But in Turkey's constrained political environment, and with a popular if polarising president still at the helm, opposition leaders will face a difficult struggle to maintain the momentum they have established.

When I spoke with Kiliçdaroğlu a few days before his arrival in Istanbul, as he approached the city limits, he sounded as surprised as anyone by the protest's size, and was keenly aware of the difficulties that loomed. The march was an unplanned reaction to the arrest of Enis Berberoğlu, a former editor-in-chief of the mainstream "Hürriyet" newspaper, and a CHP member of parliament. 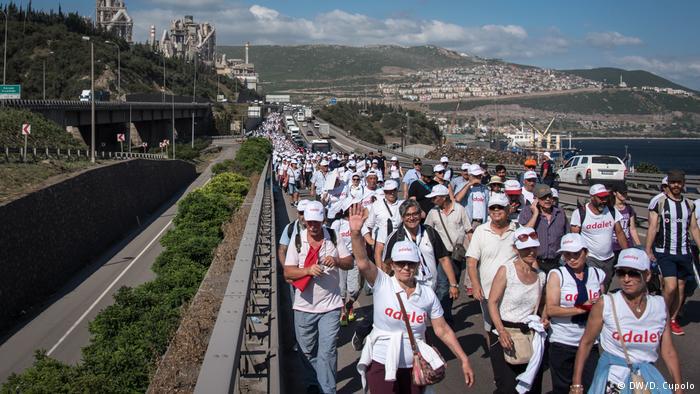 According to Sinan Ülgen, Kemal Kiliçdaroğlu was "as surprised as anyone by the protest's size, and was keenly aware of the difficulties that loomed". Pictured here: people taking part in the "Justice March". Starting in the middle of June, tens of thousands of people walked the 432 km from Ankara to Istanbul with Kiliçdaroğlu, covering 20 km everyday

But the march's more concrete objectives, like its route, became known only after the 450-kilometre protest got underway. By the time Kiliçdaroğlu arrived in Istanbul, marchers were calling for economic equity, educational opportunity, gender equality and a guarantee of non-discrimination on the basis of ethnicity, religion or cultural identity. Kiliçdaroğlu, meanwhile, said his goal was the complete remodelling of the Turkish state, with clear limits on executive authority by a re-empowered parliament, an impartial judiciary, and a free media. Forging a coherent political platform from such a diverse array of objectives will test the CHP leadership.

In recent years, spontaneous demonstrations like the one just completed have not delivered the reforms participants have sought. In May 2013, for example, huge crowds gathered to challenge the government's plans to develop Istanbul's Gezi Park; the demonstrations ended with no real political impact. A similar outcome is possible this time.

Nonetheless, polling numbers seem to suggest that the public is increasingly behind Kiliçdaroğlu. According to a survey published by Research Istanbul on the day of the rally, support for the march was 43 per cent, which is about 17 percentage points higher than the CHP's approval ratings. In other words, CHP marchers drew support from outside their base, a sign of Turkey's deepening disillusionment with the status quo.

Supporters included members of the pro-Kurdish People's Democratic Party (HDP), 83 per cent of whom approved of the protest. It even resonated with members of Erdoğan's own Justice and Development Party (AKP); 10% of AKP members surveyed said they supported the march's objectives. 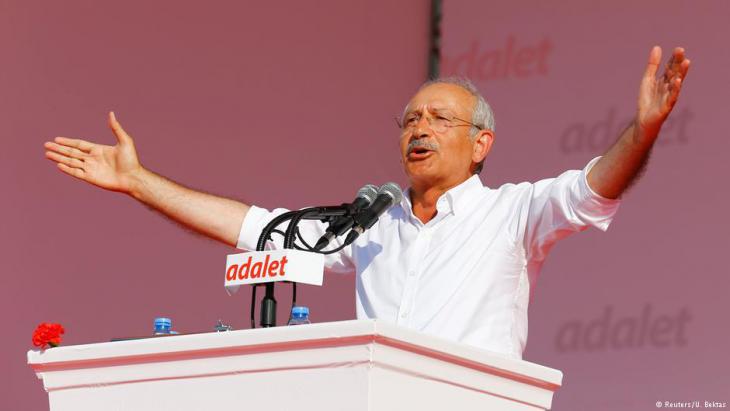 Writing in "The Guardian" on 6 July 2017, Kemal Kiliçdaroğlu (above) said: "Regardless of our political views, we are united under one single cause: justice. We walk peacefully. We do not respond to the laying of bullets on the road in front of us, or the manure dumped on our camping sites. When bullies try to provoke us with insults we respond only with applause. Our peaceful but steely determination is our greatest asset."

With his unexpected, unplanned civil disobedience, Kiliçdaroğlu seems to have consolidated his role as the leader of a larger, somewhat fragmented, opposition. In the year since last July's failed coup, the government's inevitable but overly heavy-handed response has alienated many Turks. With emergency rule still in effect, a growing segment of the public, it seems, is receptive to the opposition's calls to strengthen the rule of law.

Erdoğan's narrow victory in April's constitutional referendum, which granted the president sweeping new powers to dissolve parliament, issue decrees, and unilaterally appoint judges, deepened the opposition's resolve. But it also helped push more Turks into the opposition's embrace. According to a Research Istanbul survey, among those who voted "no" to the referendum, 85 per cent stood with Kiliçdaroğlu marchers. Tellingly, 7 per cent of those who voted "yes" did as well.

It is too early to speculate whether Kiliçdaroğlu's march will have a lasting impact on Turkey's political direction. But, at the very least, it has reframed expectations for the country's next presidential election, now scheduled for November 2019. But even with the modest gains made earlier this month, Erdoğan remains a formidable opponent, and there is still a long road to walk if Kiliçdaroğlu's "new beginning" for Turkey is to be realised.

Sinan Ülgen is chairman of the Istanbul-based Center for Economics and Foreign Policy Studies (EDAM) and a visiting scholar at Carnegie Europe in Brussels. He is the author of the recent Carnegie Europe paper "A Threat-Based Strategy for NATO's Southern Flank".

All eyes in Turkey are on a court hearing scheduled for January 30 into a child abuse case that allegedly occurred with the knowledge of one of Istanbul's most powerful Islamic ... END_OF_DOCUMENT_TOKEN_TO_BE_REPLACED

Any reconciliation between Turkey and Syria’s Assad regime would have disastrous consequences for many Syrians, explains Syria expert Kristin Helberg END_OF_DOCUMENT_TOKEN_TO_BE_REPLACED

The poetry of Pir Sultan once prompted uprisings in the Ottoman Empire. To this day, Alevis identify with him. Rainer Hermann visited Mehmet Celebi, a direct descendant of the ... END_OF_DOCUMENT_TOKEN_TO_BE_REPLACED

There are signs of an imminent normalisation of relations between Turkey and Syria. This would allow Erdogan to score political points domestically before the upcoming elections ... END_OF_DOCUMENT_TOKEN_TO_BE_REPLACED

Turkey will mark the centenary of the proclamation of the Turkish republic in October. But 2023 will be an important year in another respect too: Turks will go to the polls in ... END_OF_DOCUMENT_TOKEN_TO_BE_REPLACED

END_OF_DOCUMENT_TOKEN_TO_BE_REPLACED
Social media
and networks
Subscribe to our
newsletter