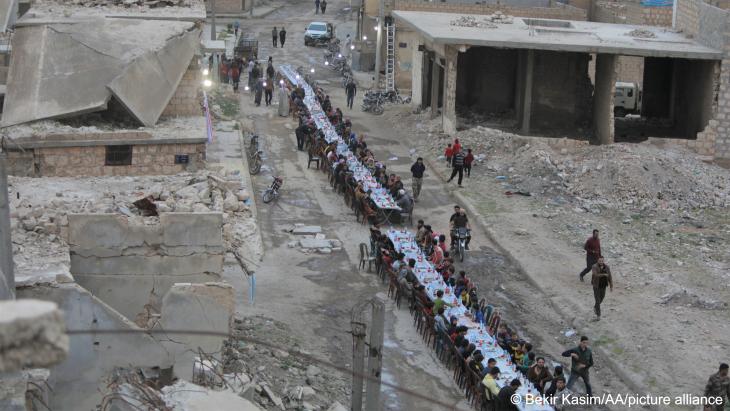 Longlisted for the 2020 International Prize for Arabic Fiction and now available in German translation, Khaled Khalifa’s novel “No One Prayed Over Their Graves” details lives and loves lost against the backdrop of a city undergoing seismic change. Joseph Croitoru read the book

Some literary works can become astonishingly topical over the course of time – even though it might not have been the author’s expressed intent. And so it is with Syrian writer Khaled Khalifa’s most recent novel, originally released in Arabic in 2019. Now published in German as Keiner betete an ihren Graebern in an excellent translation by Larissa Bender, it conjures up a forgotten era in the history of Aleppo.

A once vibrant, multi-ethnic and multicultural city, large parts of Aleppo were reduced to rubble during the Syrian civil war, primarily by Russian bombs. It has become a horrific emblem of the same unbridled frenzy of destruction that is now being visited on Ukraine: today, if you do an online search for Aleppo, you will soon come across Mariupol.

The tradition-steeped Syrian city and the area surrounding it has seen other turbulent and destructive times, in the nineteenth century and the first half of the twentieth, as well as periods when it has flourished. Khalifa brings them to life for us, in a novel composed of several dramatic events – wholly invented, as he has stressed in interviews with Arabic-language newspapers – each of which forms a starting point for the various strands of the novel.

Set in different time periods, and moving back and forth principally between 1881 and 1951, these strands tell the life and love stories of half a dozen people, their relatives and descendants. The narrative threads are frequently woven together, though just as often they unravel; several minor characters only enter the stage for a short while before, for the most part, disappearing entirely. 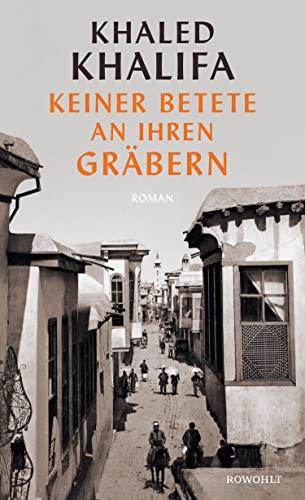 Spanning almost a century, Khalifa’s novel chronicles Syria's development through the stories of several families. It is the work of a great storyteller who skilfully combines the rich imagery of the Arabic language with reflections on life and death and reminds us of Syria's significant cultural past, which today seems so remote

The novel begins with a flood in the year 1907, when the Euphrates bursts its banks and lays waste to the nearby village of Hosh Hanna. Two of the protagonists, who were elsewhere at the time of the disaster, lose their loved ones. Hanna Gregorus, a Syrian Christian and the progeny of landowners, who is named after the village, mourns the death of both wife and son. His best friend, the Arab Muslim Zakariya Bayazidi, has a son who is taken by the river, while his Kurdish wife Shaha barely escapes with her life.

The only other survivor is the Christian woman Nassar Marianna, the daughter of Hanna Gregorus’s land agent – who will only play a role later in this story. The catastrophe, the effects of which are far-reaching and recounted over long periods by the omniscient narrator, from whose perspective almost the whole novel is seen, represents a caesura. After the flood, Hanna, Zakariya and Shaha are changed forever; Shaha will soon perish as a result of it.

The next section of the narrative takes us back to 1881, and introduces the reader to the main protagonists as children. Hanna, the only one to escape a massacre of his family by Ottoman officers, is taken in by Zakariya’s father, a bookkeeper. The two boys and Zakariya’s sister Suad soon become close friends with a Jewish boy, Aza Istanbuli, and his Christian companion William Issa. Apart from William, whose life is cut tragically short by his forbidden love for a Muslim girl, they drive the majority of the novel’s plot.

A window on history

Khalifa does an impressive job of weaving together the lives of these characters in their various phases against the backdrop of each time period. Little light is shed, however, on the social and political circumstances of the Ottoman era and the period of French mandate that followed it, or the transition to Syrian independence.

We don’t encounter any clearly-drawn characters who embody these systems of rule.

Love and religion, by contrast, are far more present forces in the novel. Hanna, who comes into his inheritance as a landowner, and Zakariya, who makes a name for himself breeding horses, are notorious libertines. Although they are both now married with children, they indulge their vices in a citadel built for the purpose, where they visit courtesans. Their louche lifestyle, which can also be read as a symbol of the strictly patriarchal and corrupt Ottoman world, ends with the fall of the Ottoman empire.

A decade after the flood, there is another catastrophe in the Aleppo region, this time a famine and epidemic. The former libertine Hanna now rediscovers himself as a Christian and has a monastery built in his home village. But Hanna, whose property the Syrian Catholic church repeatedly tries to seize, still doesn’t become pious.

That doesn’t stop Marianna – the last remaining survivor of the flood, who is now in charge of the monastery – from trying to have him canonised. Her religious zeal and her insistence are no less of a torment to Hanna than his unfulfilled love for Suad, who has not really got over the fact that they never married.

Her character in particular allows Khalifa to illustrate the changing times from the Ottoman to the colonial epoch, and the resistance to the consequences of this change: when the emancipated Suad organises a fashion show in Aleppo, Muslim zealots destroy the endeavour with an arson attack. The same violent perpetrators will later send Hanna and Zakaria’s old citadel of lust up in flames, along with the ageing prostitutes who live there.

It may be a result of the great number of characters in the novel, the frequent breaks in their biographies, and the long timespan that Khalifa seeks to cover, but the psychology of the main protagonists doesn’t always seem quite coherent. However, the colourful panorama of the lost, multi-layered society of Aleppo that this very readable novel paints is still thoroughly impressive.

Millions in Idlib depend on aid coming through a northern border crossing. On 10 July, the UN Security Council votes whether to keep it open. The decision may hinge not only on ... END_OF_DOCUMENT_TOKEN_TO_BE_REPLACED

Although many Arabs express sympathy for the Ukrainian people, social media reveals a current of support for Russian President Vladimir Putin that is rooted in polarisation, ... END_OF_DOCUMENT_TOKEN_TO_BE_REPLACED

Bachtyar Ali sends the hero of his latest novel – "Mein Onkel den der Wind mitnahm" – literally flying. Jamshid is so thin after his years as a political prisoner that a gust of ... END_OF_DOCUMENT_TOKEN_TO_BE_REPLACED

The murder of a female student at Mansoura University in the Nile Delta has sparked a long overdue debate on femicide in Egypt. Karim El-Gawhary reports from Cairo END_OF_DOCUMENT_TOKEN_TO_BE_REPLACED

For a century, the Kurds and other minorities in Turkey have been subject to state repression. With his dissertation "The Kurdish Question in Turkey", political analyst Ismail ... END_OF_DOCUMENT_TOKEN_TO_BE_REPLACED

END_OF_DOCUMENT_TOKEN_TO_BE_REPLACED
Social media
and networks
Subscribe to our
newsletter