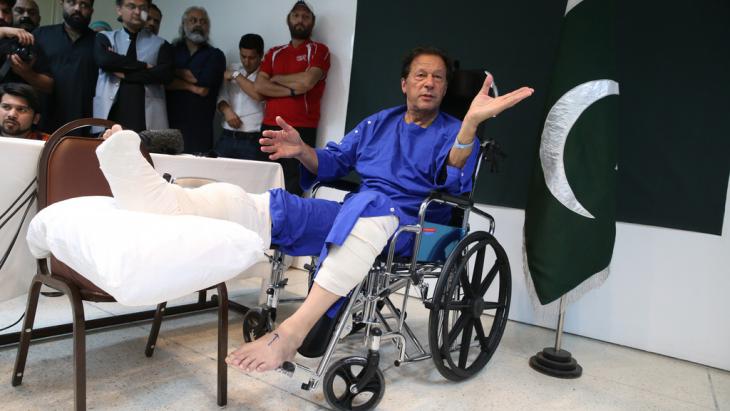 The attempt on the life of Pakistan's former prime minister Imran Khan marks a turning point in the country’s politics. Having come to power in 2018 with the help of the military, Khan is now increasingly distancing himself from his former patrons. Analysis by Mohammad Luqman

On 3 November, Pakistani ex-prime minister and current opposition leader Imran Khan was shot in an assassination attempt during a rally in the city of Wazirabad. While the assailant was quickly overpowered and is in police custody, the background to the attack has yet to be fully investigated. Interior Minister Rana Sanaullah described the incident as the religiously motivated act of a lone perpetrator. At the time, Imran Khan was leading a mass protest march towards the capital Islamabad, lending weight to his demands for a snap general election.

Pakistan is reeling from shock in the wake of the attack. Supporters of Khan's party, the Pakistan Tehrik-e Insaf (PTI), who have been seething since Khan's ousting, suspect the incident of having been orchestrated by shadowy military elements, while Khan himself further fuelled speculation in a statement given from his hospital bed. In it, he accused Prime Minister Shehbaz Sharif, Interior Minister Rana Sanaullah and General Faisal Naseer of the ISI military intelligence agency of being involved in the attempt on his life. With that, relations between Khan and the powerful "establishment", as the military is euphemistically known in Pakistan, can be said to have reached their lowest ebb.

Three years ago, when Khan came to power, things were very different. Analysts agree that the election success of Khan's PTI party in 2018 was due to the military's "political engineering". At the time, the aim was to chase Nawaz Sharif out of office, who was at loggerheads with the powerful head of the armed forces. Having won the election, Khan repeatedly emphasised how well he and the "establishment" got on. The opposition mockingly nicknamed him "Selected" and "Ladla", literally ‘darling of the military’. 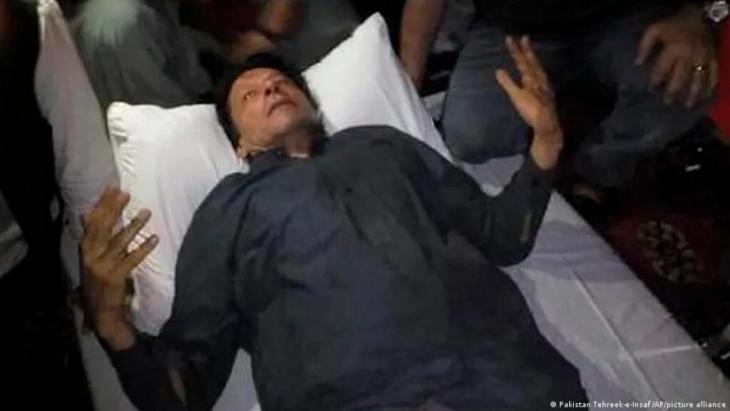 On 3 November, Pakistani ex-prime minister and current opposition leader Imran Khan was shot and injured during a rally. Interior Minister Rana Sanaullah described the incident as the religiously motivated act of a lone perpetrator. "PTI supporters are believed to have been carrying weapons in their protest march on the capital Islamabad," writes Mohammed Luqman. "Whether Khan is seeking to provoke a violent confrontation for a return to power remains to be seen. What is certain, however, is that the attack has played into his hands"

Since then, however, the situation has changed fundamentally. "Ladla" has morphed into an avowed opponent of the powerful generals. Behind the sudden change of heart is a prolonged dispute between Khan and his erstwhile patrons.

Whom to appoint as head of Pakistan’s ISI?

The first signs of cracks in the relationship between Khan and the military surfaced in October 2021. Khan dragged his feet in approving the appointment of the new director of ISI, Pakistan’s military intelligence agency. This was interpreted as a direct snub of military chief General Bajwa. Officially, although ISI reports directly to the prime minister, it is the job of the top brass to make key personnel recommendations, while the political leadership merely lends its pro forma approval.

Khan was seeking an extension of the term of outgoing ISI director General Faiz, officially owing to the fluid geopolitical situation in neighbouring Afghanistan. Unofficially, it was probably because of Faiz’ close ties to and sympathies for the PTI. General Bajwa, on the other hand, had been planning to promote his close confidant General Nadeem to this high profile position. A fierce dispute raged behind the scenes. In the end, Khan bowed to pressure from the military, which does not brook any interference in its internal affairs, especially not by the political leadership. At the time, speculation was already rife that Khan's days as prime minister were now numbered.

The inability of the PTI government to deal with the growing economic crisis triggered a surge in popular anger against both the government and the military, with many blaming the latter for the PTI's electoral victory. The military’s image took a battering – a situation that needed to be rectified.

Back in 2020, General Bajwa had already been forced to mend fences between Pakistan and Saudi Arabia, after Khan's government publicly criticised Saudi Arabia over its lack of support in the Kashmir conflict, which clearly angered Riyadh. All this saw tensions rising between the generals and Imran Khan. 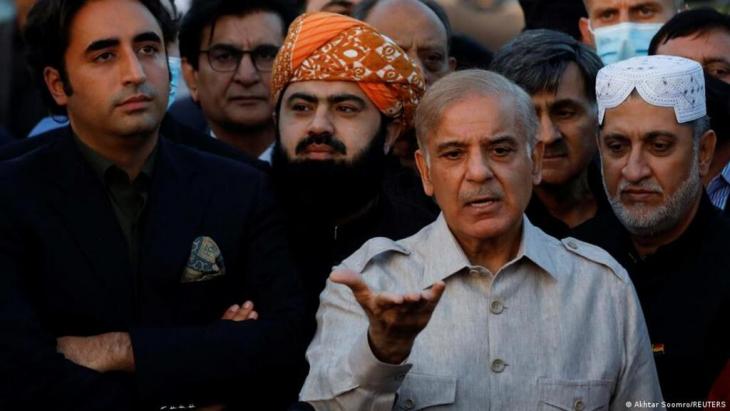 Pakistan's head of government Shehbaz Sharif, Imran Khan's successor: as early as 2021, options for a change of government were explored in secret meetings between the opposition and the military, as Mohammed Luqman writes. A return of ex-prime minister Nawaz Sharif, currently in exile in London, was considered unacceptable by the military, but his brother Shehbaz was approved

In 2021, options for a change of government were explored in secret meetings between the opposition and the military. It is likely they agreed on the "minus one" solution, i.e. an opposition government without the return of former prime minister Nawaz Sharif, currently in exile in London. His brother Shehbaz, however, was approved.

Then suddenly PTI MPs withdrew their support for their party leader, first at a federal level in the national parliament, where Khan failed to survive a no-confidence vote and lost his post, and later in Punjab, the country's largest province. The military then announced several times that they were now neutral and would not interfere in political affairs. Military chief General Bajwa also declared that he would not seek an extension of his term after November 2022.

Seeking to salvage something from this political fiasco, Imran Khan came up with the narrative of a political conspiracy against him – allegedly involving the Americans – because he had pursued a more independent foreign policy. The new government, he said, was nothing but a product of the USA.

A cipher from the Pakistani embassy in Washington was reinterpreted accordingly by Khan. Khan’s hope is that his anti-American populism will garner him enough votes to win another general election. His brand of populist electioneering has indeed helped him and his party, the PTI, to victory in several mid-term elections in the past.

Secret recordings of Khan's phone calls released in recent months reveal that the idea of a foreign coup being behind his loss of power was fabricated deliberately by Khan and his cohorts. Truth, as we all know, plays a subordinate role in Pakistani politics. Incidentally, anonymous leaks of wiretapped conversations also have a long tradition in Pakistan. Only recently, wiretapped telephone conversations of the incumbent prime minister Shehbaz Sharif have surfaced on social networks. Who exactly is behind these leaks has yet to be established. 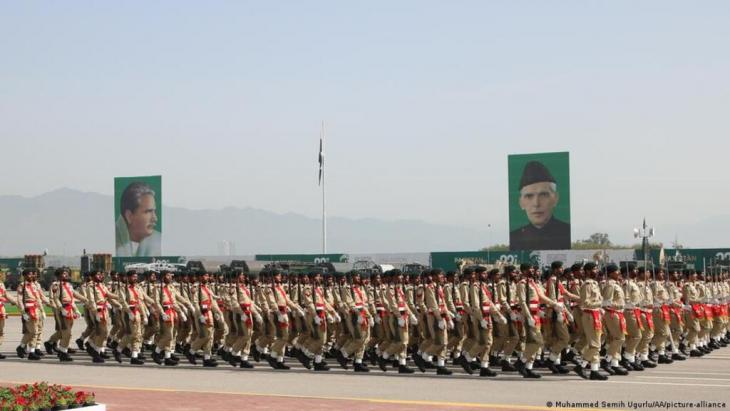 Powerful military under pressure: Pakistani society is polarised, while PTI supporters' criticism of the military is becoming increasingly fierce and aggressive. The killing of well-known journalist and PTI sympathiser Arshad Sharif on 23 October by Kenyan police prompted ISI chief General Nadeem, in a rare move, to hold a press conference personally denying any involvement in the journalist's death. PTI supporters accuse the intelligence agency of murdering Ashraf, who had fled the country in Pakistan because of his outspoken criticism of the generals and a looming charge of treason

Criticism focused on the military

Pakistani society is polarised, while PTI supporters' criticism of the powerful military is becoming increasingly fierce and aggressive. The killing of well-known journalist and PTI sympathiser Arshad Sharif on 23 October by Kenyan police prompted ISI chief General Nadeem, in a rare move, to hold a press conference personally denying any involvement in the journalist's death. PTI supporters accuse the intelligence agency of murdering Ashraf, who had fled the country because of his outspoken criticism of the generals and a looming charge of treason.

In an already heated atmosphere, the attempt on Imran Khan's life has only added fuel to the fire. During protests, angry PTI supporters openly chanted "Go, Bajwa, Go" towards the army, while others vowed revenge on Interior Minister Rana Sanaullah with raised Kalashnikovs.

PTI supporters are believed to have been carrying weapons in their protest march on the capital Islamabad. Whether Khan is seeking to provoke a violent confrontation for a return to power remains to be seen. What is certain, however, is that the attack has played into his hands.

A lawmaker in Pakistan's rugged northwest was sipping tea with voters when his phone chirped to life – the Taliban were calling with a demand for 'donations'. "We hope you won't ... END_OF_DOCUMENT_TOKEN_TO_BE_REPLACED

The local screening of a Pakistan-produced movie portraying a love affair between a married man and a transgender woman hangs in the balance after the film was cleared by censors ... END_OF_DOCUMENT_TOKEN_TO_BE_REPLACED

Sufism has fluid boundaries. Just like Islam, Sufism is inconceivable without its late antique roots. Then again, it has also exerted an influence on Hinduism. Moreover, the Sufic ... END_OF_DOCUMENT_TOKEN_TO_BE_REPLACED

Following the recent brutal attack on Salman Rushdie, famous writers have been reading passages from his works. Torsten Landsberg takes a look at the struggle in 1988 to publish " ... END_OF_DOCUMENT_TOKEN_TO_BE_REPLACED

One year ago the Taliban returned to power, seizing Kabul; the U.S. and its allies made a panicked exit from the country. Of all the books written on the subject, four stand out ... END_OF_DOCUMENT_TOKEN_TO_BE_REPLACED

The Biden administration could have used Pakistan’s economic crisis to compel the country to sever its longstanding ties to terrorist groups. Instead, the U.S. protects and ... END_OF_DOCUMENT_TOKEN_TO_BE_REPLACED
Author:
Mohammad Luqman
Date:
Mail:
Send via mail

END_OF_DOCUMENT_TOKEN_TO_BE_REPLACED
Social media
and networks
Subscribe to our
newsletter