Khomeini's fatwa was just as illegitimate in the traditional Islamic view as the attacks of 9/11 – both are vile products of modern fundamentalism. Daniel Bax comments 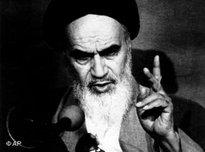 The fatwa – a shrewd political move? Khomeini's call to murder raised his profile as an opinion leader and distracted from his country's weakness in the wake of its eight-year war against Iraq, writes Bax

​​ When the aged Ayatollah and "revolutionary leader" Khomeini called for the murder of the author Salman Rushdie via Radio Teheran on 14 January 1989, declaring his novel The Satanic Verses blasphemous, the world reacted with shock.

This outrageous announcement led to a renewed ice age between the Mullah regime and the West, although relations had just begun to thaw. The conflict was not eased until years later when Iran distanced itself from the call for murder.

Khomeini's appeal provoked an unprecedented wave of solidarity with the threatened novelist, who was forced to go into hiding. Thousands of writers around the world declared their support for Salman Rushdie, organising public readings and condemning the scandalous fatwa. Their numbers included prominent Arab and Muslim writers and intellectuals: the Egyptian Nobel laureate Nagib Mahfuz called it an "act of terrorism" and the Moroccan author Tahar Ben Jelloun wrote that it had "nothing to do with the tolerant Islam that I was taught."

The fatwa: a vile product of modern fundamentalism 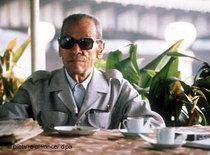 The Egyptian Nobel laureate Nagib Mahfus openly displayed his solidarity with Rushdie. In 1994 Islamic extremists almost succeeded in assassinating the 82-year-old novelist by stabbing him in the neck outside his Cairo home

​​ In actual fact, Khomeini's fatwa was just as inadmissible in the traditional Islamic view as the attacks of 9/11: both are a vile product of modern fundamentalism.

The fatwa had been preceded by protests in British cities and in Iran's neighbouring Pakistan, instigated by Islamist organisations. It was probably these protests that gave Khomeini the idea of placing himself at the forefront of the movement. His call to murder was a shrewd move to raise his profile as an opinion-leader. It distracted attention from his country's weakness in the wake of its eight-year war against Iraq, whitewashed political differences on the home front and cemented his regime's claim to fundamentalism.

At the time, the fronts seemed clear enough: Khomeini and his followers on one side, and the dedicated defenders of freedom of opinion on the other. Since then, however, the approach taken to Islam and Islamism has changed drastically; since 9/11, the global context and the climate in society have been transformed beyond recognition in most countries.

Forced into the defensive

Western troops have invaded Afghanistan and Iraq, Lebanon and Gaza have been bombed, and many Western states have tightened immigration legislation. Many Muslims now feel forced into the defensive.

​​ Some, like the British writer Kenan Malik, nevertheless draw a direct line from the "Rushdie affair" to seemingly similar events in the recent past – the affair over the Danish Mohammed caricatures, the scandal over the pope's Regensburg speech or the overly hasty cancellation of an Idomeneo staging at Berlin's Deutscher Oper. And they see "the West" or "the left" as practicing a kind of "appeasement" towards Islamism.

The evidence cited for their thesis includes the fact that the Danish newspaper Jyllands-Posten, unlike Rushdie, did not receive widespread solidarity over the caricature incident. Yet it was unlikely to have been fear of unpredictable consequences that prevented many a German newspaper from printing the Danish pictures.

Many simply considered the Mohammed caricatures an all too calculated provocation, put off and angered by the intention behind them. Just to set records straight: it was Germany's left-wing (taz) and conservative (FAZ, Focus) papers that printed the caricatures – and the liberal (Süddeutsche, Frankfurter Rundschau) and right-wing (Bild) competition that refrained from doing so.

It would be just as wrong to force every conflict allegedly concerned with Muslim religious feeling into the corset of a clash of civilisations with "Islamism". The fact that embassies burned in Damascus and Beirut of all places at the height of the caricature affair, for example, is more likely to do with a (secular) Syrian regime under pressure than with religion.

There are even "scandals" that take place without the slightest hint of offended Muslims. In the case of the Idomeneo cancellation, it was the fears of Berlin's senator for the interior that caused the opera director's panicked reaction. Before the show was called off, not a single Muslim had complained that the Prophet Mohammed was decapitated in the opera.

​​ And although there are many who choose to see it as a clash of civilisations, the relationship with Islam and Islamism is essentially a political subject. The question is: how can we combat a fundamentalist ideology, and how can we react to anti-democratic tendencies among immigrants? We should not let religious rhetoric pull the wool over our eyes when it comes to an offensively presented claim to power.

For this very reason, it is key that every bookshop may stock The Satanic Verses, and every newspaper has the right to print the Danish Mohammed caricatures, if they so wish.

Yet there is another question: what role do we grant to Muslims in our society? This is an issue of the relationship between state and religion, which is far from clear in many European countries no matter what many may think. And it is an issue, for example, of who is given more column inches and airtime: the Muslims themselves or the caricatures that others draw of them?

Freedom of the press entails responsibility

Freedom of the press has to do with responsibility. It ends at the point where the defamation of a minority begins. For this good reason, no German newspaper reprinted the Holocaust caricatures called for by Iran in reaction to the "caricature affair". Stylising freedom of opinion as something quasi-holy is just too simple.

Those who treat art as a religion, declaring controversial films, books and caricatures sacrosanct, fail to understand that art production works on the principle of supply and demand. And that not every case of sensitivity towards touchy subjects is automatically an expression of self-censorship and "appeasement".

Critique of Islam is not a taboo, at least not in western societies. Quite the opposite: a regressive "critique of Islam" has become almost a favourite national pastime in recent years. It harbours a certain tantalising element of risk, but guarantees a great deal of public attention. So it does not take a great deal of courage today to present Muslims and their faith as something hopelessly outdated or even dangerous – every other Sunday night detective show is at it nowadays.

A spot of crude Islam bashing will easily get you onto talk shows and bestseller lists. And the only motivation for the FAZ newspaper, not previously noted for its anti-clerical tendencies, to have started running a series of caricatures featuring a crazy homophobic Mullah, is attention-seeking.

Bearded men jokes – without question, these too are part of our freedom of opinion. But it has nothing to do with enlightenment.

Daniel Bax is an editor for the Tageszeitung. It was not least the "Rushdie affair" that prompted him to study Islamic Studies and Journalism in Berlin.

20th Anniversary of the Fatwa against Salman Rushdie
The Complicated Craft of Enlightenment
It has been twenty years since Ayatollah Khomeini issued the fatwa on Salman Rushdie. The Anglo-Indian author of The Satanic Verses still takes a critical stance on religion, yet he is also a vocal protester against discrimination of Muslims. By Lewis Gropp

END_OF_DOCUMENT_TOKEN_TO_BE_REPLACED
Social media
and networks
Subscribe to our
newsletter