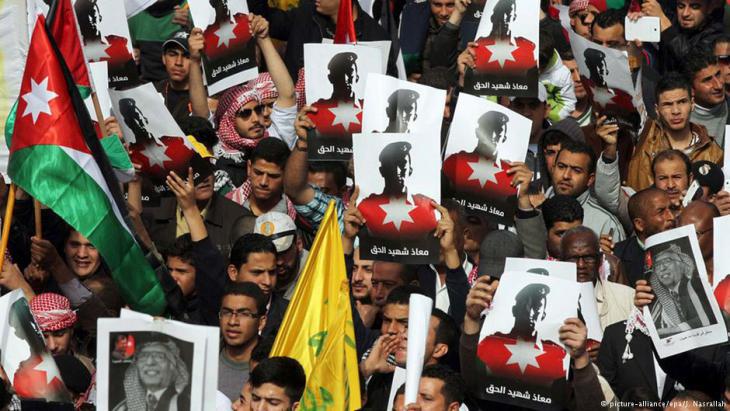 IS's brutal killing of a Jordanian fighter pilot has shaken the people of Jordan and united the nation. The war and chaos in neighbouring Syria and Iraq no longer seem as far away as they used to. By Tania Kramer in Amman

The large Jordanian flag is flying at half-staff high over the capital of Amman. The nation is mourning the death of the murdered pilot Moaz al-Kasasbeh, who was burned alive by the terror group Islamic State. You can see the flag quite well from Rainbow Street, a popular nightlife district in the centre of Amman. It is lunchtime and most of the people meeting here for a coffee and to enjoy the warm winter sun are young.

Although IS terror seems far away, people here are also worried. "This is actually not our war, but it has become our problem now," says Oraib Majali, a young student. "I have no idea what will happen here next," she says. Others are also concerned about Jordan getting more deeply involved in the war in the neighbouring countries of Iraq and Syria. "The right reaction would be for all Arab countries to work together and not just Jordan," says Muhammed Qtoush, who studies in Egypt. "What IS is doing is awful. Everyone should do something about them."

For many Jordanians, the death of the pilot has brought the war and political chaos in neighbouring Syria and Iraq much closer to home. The video showing the young man being burned alive is over 22 minutes long. It has been engraved in the nation's memory. After Kasasbeh's death, Jordan's King Abdullah II announced a "merciless war" against IS and has evoked the unity of the nation.

Since then, the Jordanian air force has stepped up air strikes with the support of its ally, the US. Every now and then, the sound of Jordanian fighter planes can be heard over the otherwise quaint and quiet capital. An American hostage held by the jihadists since August was allegedly killed in one of the retaliatory attacks on IS positions on Friday, 6 February. IS terrorists claim that the aid worker from the US was killed in a Jordanian air strike near the northern Syrian city of Raqqa. 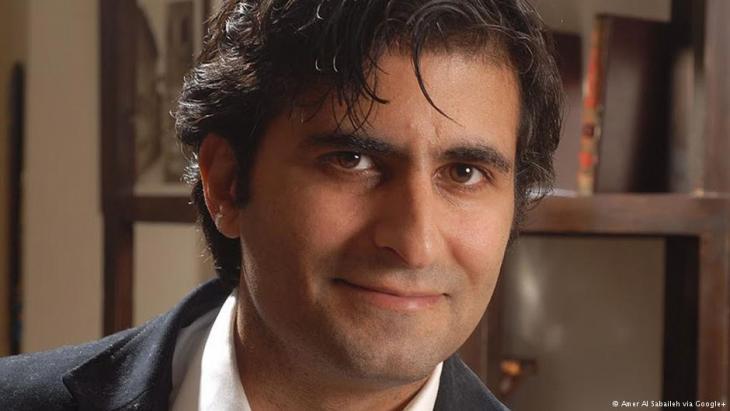 "Jordanians will have to accept the fact that this is not a conflict that will be over in a month," says Amer al-Sabaileh. "Ultimately, this is not just about military intervention but about a battle against an ideology which is also ingrained in our society"

Increased support for campaign against IS

Observers believe that Islamic State is using such news to try to split the US-led alliance. But such theories are of little interest to Jordanians right now. "This gruesome form of murder has given Jordan more leeway to act against IS," says security expert Amer Al Sabaileh."The country can take more rigorous military action than it has until now and it will make use of its options. Surrounded by Syria, Iraq and Sinai, Jordan virtually lies in the centre of all these conflicts."

Many Jordanians were sceptical about the participation of their military forces in the US-led alliance against IS militia. Together with Bahrain, Saudi Arabia and the United Arab Emirates, Jordan is one of only four Arab states that have been taking military action against IS since last September. Publically, the government in Amman said little about military engagement as part of this alliance. That has changed since the Jordanian fighter plane crashed and the 26-year-old pilot Moaz al-Kasasbeh was taken hostage by IS.

Al-Kasasbeh was probably killed in early January. Ever since the video appeared on Tuesday night, Jordan's King Abdullah has had the people's widespread support – even if there has been restrained criticism. "The people are very angry and emotional; I can understand that. But people should never act on vindictiveness," says Mothana Ghariabeh, who describes himself as a left-wing activist. "It should be somewhat more distinct and bear in mind the problems in our nation," he says.

He would above all like to see a broader coalition of Arab states taking action against IS and argues that a US-led alliance plays right into the hands of those who accuse the West of only wanting to enforce its own agenda.

The Jordanian Muslim Brotherhood also approves of the air strikes. The group has already publicly spoken out against IS in the past. "We support the air strikes," says Mohammed Qudah, a representative of the Muslim Brotherhood. "But we are clearly against taking part in a ground offensive." No one has yet spoken about this at all, at least not officially. 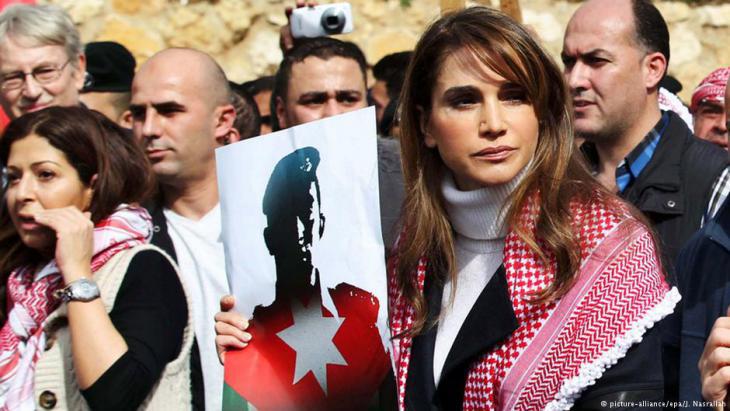 About 2,000 Jordanians fighting alongside IS

Military experts assume that Jordan will continue to intensify its air strikes. There is also speculation about special missions against IS leaders. "Jordanians will have to accept the fact that this is not a conflict that will be over in a month," says commentator Amer al-Sabaileh. "Ultimately, this is not just about military intervention but about a battle against an ideology which is also ingrained in our society."

After all, even in Jordan there are IS supporters in Salafist-jihadist circles. In a survey conducted by the Center for Strategic Studies in Amman last September, ten per cent of surveyed Jordanians expressed their sympathy for IS. Even then, however, around 80 per cent viewed the terrorist group as one of the greatest threats to stability in the country.

An estimated 2,000 Jordanians are fighting for IS in Syria and Iraq at the moment, making them the third strongest national group behind Saudi Arabia and Tunisia. In recent months, Jordanian security forces have arrested dozens of people who have expressed sympathy for IS in social networks. Observers fear that the war on terror is eclipsing the country's domestic problems and reform plans.

Right now, however, sorrow and anger over the killing prevail. And the King's call for unity has been well-received. In what local media described as one of the largest demonstrations in recent years, several thousand Jordanians marched through the centre of Amman to protest against the killing after Friday prayers. Many demonstrators held up pictures of the assassinated pilot and also King Abdullah. Even Queen Rania briefly mingled with the demonstrators.

"We are all Moaz" and "long live King Abdullah" chanted the demonstrators. "Moaz has lost his life for us and we have to show unity now," said a young woman with a picture of the murdered pilot in her hands. Fifteen-year-old Khalid Fouary went to the demonstration with his father to take a stand. "This is how I support the King so he can destroy IS. IS is destroying the reputation of true Islam," says the youth, his face grave. The people around him nod in agreement.

Home
Print
Newsletter
More on this topic
Islam and violence: Conservative Muslims refute the violence of ISStrategies for combating IS: Plea for a wide-angled view of the Arab worldThe genesis of Islamic State: A new chapter in the decline of the Arab worldIslamic State (IS): A totalitarian, expansive and hegemonic project
Related Topics
'Islamic State' | IS, International terrorism, Islam and the West, Abdullah II of Jordan, Muslim Brotherhood
All Topics

They’ve already got the Louvre; they’ll soon have a Guggenheim Museum as well – and now the Emirates have added literature to their quest for cultural supremacy in the Arab world ... END_OF_DOCUMENT_TOKEN_TO_BE_REPLACED

The rollout of coronavirus vaccines in the Middle East and North Africa is already taking place on a massive scale, with the United Arab Emirates leading the way. Nevertheless, ... END_OF_DOCUMENT_TOKEN_TO_BE_REPLACED

Faced with a deteriorating economy and a discontented populace, Jordan's ruling family is feeling the pressure. END_OF_DOCUMENT_TOKEN_TO_BE_REPLACED

Founded in 1921 as a temporary solution, Jordan managed to establish itself as one of the most stable countries in the Middle East. The inclusive and flexible approach taken by ... END_OF_DOCUMENT_TOKEN_TO_BE_REPLACED

German Middle East analyst Guido Steinberg and television journalist Ulrich Tilgner have both published new books on the conflicts in the Middle East. Their analyses and their ... END_OF_DOCUMENT_TOKEN_TO_BE_REPLACED

END_OF_DOCUMENT_TOKEN_TO_BE_REPLACED
Social media
and networks
Subscribe to our
newsletter