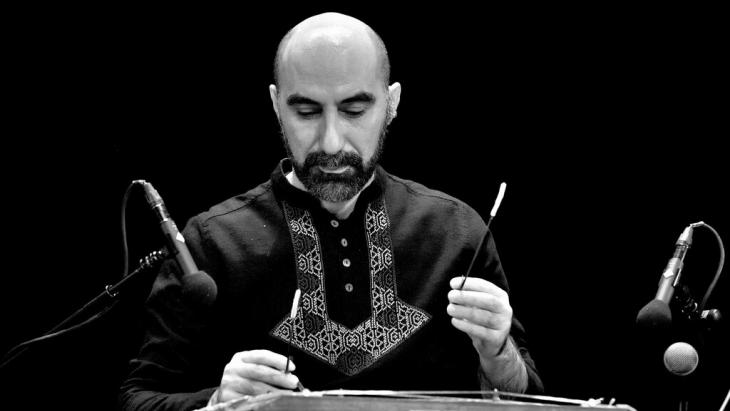 With his new album, "A Voice Keeps Calling Me", the Persian santur player Kioomars Musayyebi is building bridges from Iran across the Arab world to European early music. By Stefan Franzen

“Even when I was still in Iran, I wanted to familiarise myself with as many different cultures as possible,” says Kioomars Musayyebi. “Because I’m convinced that music is a common language in which we can speak to one another without words, even when societies have diverged a little through their different cultures and rituals. It’s just the dialects, the accents that are different.” Musayyebi grew up in Tehran. It was his father who first introduced him to music; he sang Kurdish songs and wanted to make an artist of his son.

He gave Kioomars into the care of Faramarz Payvar, the greatest Persian master of the hammered santur, who did more than just stoke the boy’s enthusiasm for the instrument: "Being a pupil of Payvar also meant gaining a philosophy for life. He was a very special teacher." To this day, Musayyebi has a lot to thank his master for, though of course he has developed his playing style further, enriching it with techniques from another student of Payvar’s, Parviz Meshkatian.

His need to look beyond classical Persian music was something Musayyebi could only fulfil to a limited extent in Iran. And so, in 2011, he came to Hildesheim, where he took advantage of everything the academy of music there had to offer. "There were a lot of opportunities there for me to try things out: how do my Persian roots sound with Arab music, with jazz, world music, and with other instruments?"

Since then, the composer – who now lives in Essen – has explored these connections through playing in all kinds of ensembles, including Transorient Orchestra, the Nouruz Ensemble and the Beyond The Roots band, which was formed last year as a multinational collective centred on the Cologne-based clarinettist Annette Maye. Bringing together a whole spectrum of facets onto one album, Kioomars Musayyebi has chosen eight pieces for A Voice Keeps Calling Me (Pilgrims of Sound) that use various combinations of strings, woodwind and plucked instruments. 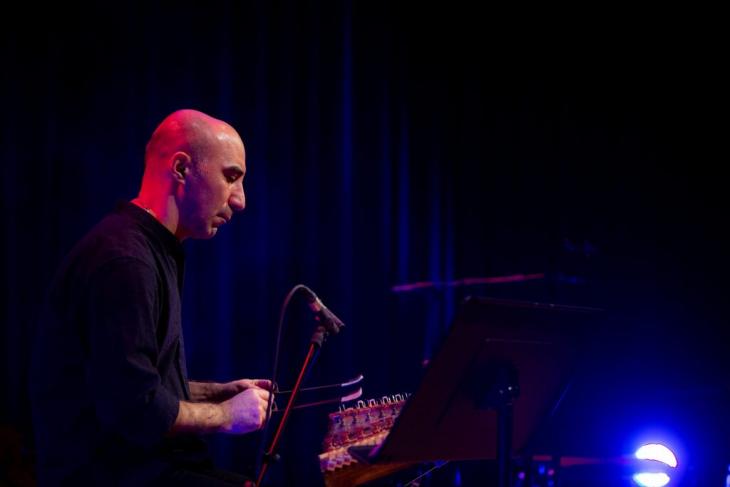 "It’s the different melodies in my head that call me," says the Iranian-German musician of his composition process. "When I’m writing, I don’t always just think about the santur, either. Sometimes I compose on the piano or the sitar, and sometimes I’m drawn towards early music, to Persia or into the Arab world. It might be that the clarinet in my head says: I need to play this melody, or maybe it’s the violin, or I imagine them playing together"

"The melodies in my head call me"

"It’s the different melodies in my head that call me," Musayyebi says of his composition process. "When I’m writing, I don’t always just think about the santur, either. Sometimes I compose on the piano or the sitar, and sometimes I’m drawn towards early music, to Persia or into the Arab world. It might be that the clarinet in my head says: I need to play this melody, or maybe it’s the violin, or I imagine them playing together. And slowly an idea takes shape: okay, this piece belongs to this or that ensemble." The melodies are like voices calling to him, and this is where the title of the album comes from, though the words are also borrowed from a poem by Sohrab Sepehri (1928-1980). He takes inspiration from the great modern Iranian poets in all situations and moods.

That constant changing of ensembles means that there is never a dull moment on A Voice Keeps Calling Me: in the opening track, "Entezar", Musayyebi gives expression to his yearning for India, allocating a prominent solo to his colleague Hindol Deb, another musician living in exile here in Germany. "Djozz" is dedicated to fellow musician Bassem Hawar and his Iraqi "djoze", a kind of knee violin. At the same time, it is a showpiece for a suite that mediates between Europe, the Arab world and Persia.

"When I was living in Iran, we had this eight-year war with Iraq," Musayyebi recalls. "And here in Germany, the Iraqi Bassem Hawar was one of the first musicians I got to know. We talked for many hours and realised that we both had the same feelings, that the music we make together brings peace."

In the title track, Musayyebi has reactivated a melody originally taken from a television series he watched as a child in Iran. After thirty years in his head, it has gained a new dignity here. Played with Anette Maye and the Beyond the Roots band, the long improvisation "Igra" is an exciting hybrid of jazz and Eurasian music. Finally, there are two nocturnes: one is rooted entirely in Persian classical music ("Naechtliches Gefluester" or "night-time whispers"), and the other brings in a dark flute and purring djoze to create wonderfully sombre tones in "Letzte Nacht" ("last night").

"The nights speak to me, I can think well at night, and feel at ease," says Musayyebi. "Every night could be the last: we might not see each other again tomorrow. But we have the hope that morning will come and everything can start all over again." With all the inspiration that Kioomars Musayyebi is finding outside his homeland, he doesn’t feel drawn back for the time being – especially given the problematic political situation there. "I would like to see even more of the world. There are still a lot of voices calling to me from other corners."

Dalia Hatuqa is an experienced journalist who has reported on the Israeli-Palestinian conflict from Ramallah, Washington DC and Amman. A writer for Time Magazine, Foreign Affairs ... END_OF_DOCUMENT_TOKEN_TO_BE_REPLACED

Since President Abdul Fattah al-Sisi seized power in Egypt in 2013, he has ruled the country with an iron fist. Civil society, opposition and free press struggle to survive. Tens ... END_OF_DOCUMENT_TOKEN_TO_BE_REPLACED

Many Turks are dissatisfied with the international status of their country. At the same time, opinion polls reveal great scepticism among the Turkish population towards the USA. ... END_OF_DOCUMENT_TOKEN_TO_BE_REPLACED

The German government is planning to legalise cannabis before the end of this legislative period. So what does Islam have to say about its consumption? Will changing the law alter ... END_OF_DOCUMENT_TOKEN_TO_BE_REPLACED

END_OF_DOCUMENT_TOKEN_TO_BE_REPLACED
Social media
and networks
Subscribe to our
newsletter