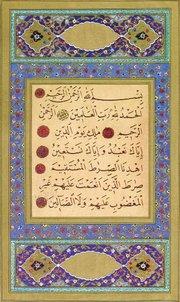 Every translation only reproduces a partial aspect of what the Arabic text entails: First sura, 'al-Fatiha', in a 20th century manuscript by the calligrapher Aziz Efendi

​​One of the Koran translations, published by Beck in Munich, is by Islam scholar Hartmut Bobzin at the University of Erlangen, the other, published by Freiburg's "Herder" publishing house is by the philosopher Ahmad Karimi, who is originally from Afghanistan.

The latter is a devout Muslim and produced a translation within one year to convey the beauty of the Koran to German-speaking readers. Bobzin on the other hand worked on his translation for ten years, and it is primarily aimed at delivering a modern, but nevertheless accurate and as far as possible undistorted version of the Holy Book.

Capturing the poetry of the Koran

For a long time, each translator was apparently not aware of the other's rival project, and before any informed judgment can be made on the quality of their work, it is still a surprise that two different publishing houses both seized upon the same idea and evidently believe that they can market a German version of the Koran at a price of just less than 50 euros. 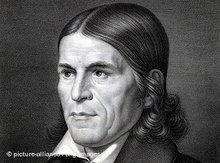 Friedrich Rückert, who was active as a poet and scholar of Islam in the first half of the 19th century, tried to capture and reproduce the poetic language of the Koran in German

​​This decision is all the more astonishing when you realize there are already several German translations of the Koran in bookstores. The most "philologically correct" version to date is that of Rudi Paret, says the Bonn Islam scholar Professor Eva Orthmann, although she does concede that this is a very academic translation that is rather difficult for the layman to read:

"Then there is the early Koran translation by Friedrich Rückert, who tried to capture and reproduce the poetic language of the Koran in German," explains Orthmann, and adds "but the translation is not complete, and from a philological point of view, it is not that precise by any account."

Rückert, who was active as a poet and scholar of Islam in the first half of the 19th century, influenced Johann Wolfgang von Goethe with his translation. Geothe's collection of poems the "West-Eastern Divan" was underpinned by Rückert's work.

There are purists who say that the Koran should not be translated, because every translation is an interpretation and therefore an alteration of the prophet's word.

The former Chairman of the Central Council of Muslims in Germany, Nadeem Elyas, had himself, together with Sheikh Abdullah as-Samit Frank Bubenheim, compiled a Koran translation – financed by Saudi Arabia – with a print run of 300,000 copies in 12 editions, distributed free of charge.

He does not share the purists' view, and believes that translations are necessary for a better understanding of the Koran. But at the same time, he concedes: "Those who say the Koran is not translatable mean that the nuances of the language and the sense cannot be rendered by a translation. That is correct to the extent that every translation only reproduces a partial aspect of what the Arabic text entails." 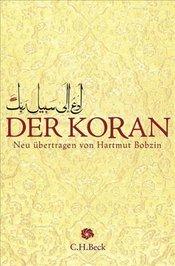 Hartmut Bobzin aimed at delivering a modern, but nevertheless accurate and as far as possible undistorted version of the Holy Book

​​There were already countless interpretations and accounts of the Koran in Arabic – and translating it into another language altogether takes this process of interpretation even further, says Elyas.

Ideally, a Muslim should be able to speak Arabic, but that is mostly not the case in the non-Arab countries of the Muslim world. This meant that even in the very early days, readers were forced to seek out a translation, and often found a middle ground in the process, as Professor Orthmann describes:

"The earliest translation was into Persian. And if you look at editions of the Koran in Iran today, for example, you will see the main text in Arabic and worshippers also recite the text in Arabic, but there is often a translation into Persian between the lines of text, so that believers can also understand what they are actually reciting."

Nadeem Elyas stresses that no Koran translation is declared "binding" even in Muslim countries. A translation is always primarily to help the faithful to a better understanding of the text, he says. 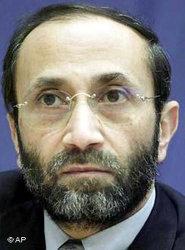 Nadeem Elyas: "A translation is always primarily to help the faithful to a better understanding of the text"

​​Elyas believes that if there are now several translations available in a non-Muslim country such as Germany, then this should also be welcomed: "It is a positive development. Times are changing. It's not just that the German language is developing, it's also a question of people's appreciation, and their taste, as far as a sense of language is concerned. And every attempt should be welcomed, because something that may have remained hidden to one translator, may then be revealed by another."

Particular significance may be attached to a German Koran translation when considering the introduction of Koran studies in German schools, as these classes will be held in German.

Professor Orthmann says that of course, the decision over which translated version can and should finally be used in schools, must be taken in consultation with Muslim organizations, as in the end it is their children who will be the ones taking part in these classes. In the case of private use, she thinks this is not so important:

Interview with Angelika Neuwirth
"The Koran – A Book in Many Languages"
Angelika Neuwirth is one of Germany's most renowned Koran experts. In this interview with Kurt Scharf, she talks about the aesthetic dimension of the Koran, the trouble with translating sacred texts, and the notion of "inlibration"

Ireland
The Gaelic Version of the Koran
The "Islamic Cultural Center" in Dublin has taken on a very ambitious project in order to bring a segment of the Irish population a little closer to Islam: the translation of the Koran into Gaelic. Arian Fariborz reports on the project and on Ireland's Muslim community

END_OF_DOCUMENT_TOKEN_TO_BE_REPLACED
Social media
and networks
Subscribe to our
newsletter